DIANE PHILLIPS: Every little bit of care helps in the life of a single mom who lost her job to COVID 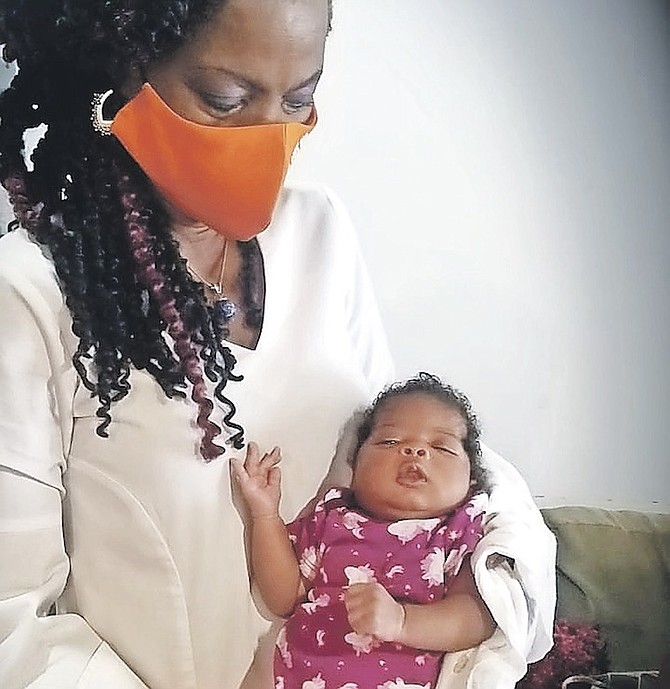 FOX Hill MP Shonel Ferguson with the baby of Alysha - who was left to sleep on the floor after COVID-19 cost her the Baha Mar job she worked at and left her with empty cupboards.

If you want to measure the impact of COVID-19, you can find it in the bare cupboards at Alysha’s apartment. Or the empty space where the refrigerator used to go before she had to sell it to help keep a roof over her children’s heads. The signs of the pandemic are everywhere in this space – the stove parts on top of the pulled apart appliance that only needs $153 to make it work again, but right now in Alysha’s world, $153 might as well be a thousand.

We told you about Alysha (not her real name) a few weeks ago, a woman who was about to give birth and would be sleeping on the floor with her baby because through no fault of her own, a virus swept through the world and took with it the job she had at Baha Mar for the last seven years. And now she has no work and nearly no food and only an air mattress to sleep on. All she has is hope, trust and faith in God that somehow the landlord will be kind and she will not have to move out and sleep in the car with her 12-year-old son, her newborn and the two-year-old who has suffered one medical emergency after another.

She talks about him and her eyes light up. “He has a disability,” she starts slowly. “He’s had seizures, he had cardiac arrest at four months, he had a stroke, he walks with a turned-out leg and he is the love of my life.” Words are barely out of her mouth as the newborn, Kamala-O (in honour of the US Vice President Kamala Harris and Michelle Obama), three weeks old today, cries. She is hungry. It is time to feed. Alysha, fit and trim at 32, jumps up like an athlete and runs to the baby being cradled by Shonel Ferguson, Alysha’s MP, whose office we are in.

A perky mother-of-two donated a family treasure, a wicker bassinette, along with a baby bath. A kindly gentleman packed up a generous supply of canned goods and non-perishables. A stove repairman offered to provide labour to repair her old stove for free when she got the new parts. Readers dropped off a few dollars.

Without a refrigerator or a working stove, every meal is a challenge. The little two-burner electric set-up is a temporary solution for cooking grits or rice or the occasional treat of eggs, so long as BPL keeps her power on. They were there to cut it off last week and she promised to pay something on it the next day.

“It’s hard, it’s tough every day and every night, but that is the harsh reality and I just have to keep going and praying and hoping to find work of any kind,” she says. “I’ll clean, I’ll do security. I just have to earn a living for my children. I worked seven years at Baha Mar since 2014 and I am so grateful for that. Even when they had to close, they kept me on in another capacity for two days a week so I had something coming in. Now, there is nothing. I don’t have one dollar.”

Rent is two months overdue. Her car is broken down, though, like the stove, the part is less than $160. The BPL bill is almost as high as the back rent. And there is nothing left to sell.

“This is the real cost of COVID and we see it every day in Fox Hill,” says Ferguson, a Fox Hillian herself. “No matter how much compassion we offer, no matter how many diapers we distribute to the desperate, the real answer is in the scientists’ and medical community’s hands. The people of Fox Hill who we see every day and take calls from until all hours of the night and morning are not failures. They did not lose their jobs because they were lousy at them or failed to perform their duties. They are the innocent victims of a virus that has taken its toll on lives like Alysha’s yet we fully understand the need to put health care first. This is just the hidden side you don’t see unless you live where the Alyshass of the island live.”

As Shonel mentions her name, baby Kamala-O finishes feeding and falls asleep. Alysha hands her over to me as she talks about her 12-year-old son for whom she has such high hopes. A student at CH Reeves, he, too, feels the brunt if not the burn-out. He wants to study but his tablet is broken.

We are all a little broken, aren’t we? How do we pick ourselves up unless we do so the meaningful way, by reaching out to help others who have less than we do, by deciding that this is one time we can make a difference? Amazing how giving makes the giver feel so good if they truly give from the heart expecting nothing in return.

If you want to help Alysha, please contact the Fox Hill Constituency Office at 603 2452.

Say yes to tablets and no to oil

With schools gradually re-opening for in-person classes, the demand for learning devices is as great or greater than ever as teacher expectation for full performance from every student increases even if education officials are reluctant to admit it.

When the Leno Learning Link began its campaign to assist the Ministry of Education to put a tablet in the hands of every student, the goal seemed so ambitious as to be almost impossible – 41,000+ tablets at $124 plus $50 connectivity for three months plus VAT, nearly $200 per student. Even at the reduced cost thanks to the partnership with ALIV which also programmed tablets for grade appropriateness, that meant raising almost $800,00.

Leno kicked the campaign off with a donation of $60,000, corporate and individual donors saw the need and wow. From a high of more than 41,000, the need for tablets now stands at 4,000, according to the Ministry of Education. But next week as more schools open their doors, that’s 4,000 students who still need a learning device, 4,000 students who could be borrowing Grammy’s cell phone or sharing a device with a big brother or sister who says they need it more than their little sibling does, 4,000 students who run the risk of falling even further behind.

Please, while you are primed for giving, dig a little deeper Bahamas and each one provide one and we will have put a tablet in the hands of every student. We can do this. You can make it happen.

While we want a yes to tablets, let’s shout it out that we want no to oil. Just because BPC has capped off one well does not mean they are not eyeing other potential sites in The Bahamas.

The marine environment is not a craps game. We got lucky with no incidents in the first trial. Let’s not test our luck unnecessarily. There are a hundred ways we can make money with the marine environment. Businessman Mario Carey has outlined several already and others have ideas. The Blue Economy has already been named the most promising economy for the next decade and we are blessed with that. There are myriad ways to monetize the waters and marine life around us and earn real dollars while preserving those same resources. Or we could search for fools’ gold and gamble on one potential revenue earner with unknown benefits and huge risk. You decide, Bahamas.

If anyone can, it will be the tiger

We’re adding prayers and well wishes to the millions around the world for the Comeback King, Tiger Woods, a familiar face in The Bahamas where he feels like one of our own. The young Tiger first appeared as a regular at Atlantis and the Ocean Club, more recently at Albany and just this year virtually at a course in South Eleuthera.

The road to recovery following his horrific rollover accident along the California coast this week will be filled with surgeries, physical rehab and more pain and agony than most would be able to stand. But if anyone can recover and even dream of returning to golf, it would be the Tiger.

Let’s let him know The Bahamas is behind him, swinging in his favour every stroke of the way. Whether he ever returns to golf or not, his legacy is established. Untold numbers of young boys and girls looked up to him and said to themselves, if he can do it, so can I.