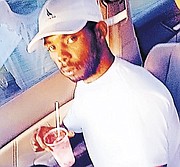 WHEN Chavon Johnson heard gunshots in her community on Monday night, she had no idea the bullets had struck her son, Anthon Percentie.

Percentie, 27, of Hutchinson Street, was shot after 8pm on Finlayson Street. The incident also left a woman in hospital in serious condition.

Ms Johnson said her son was at Finlayson Street hanging out with friends. She believed he was getting something to eat at the time of the shooting.

She said she had not seen her son all day because she was at work. The two lived together.

“One of my friends called me and told me he just got shot,” she told The Tribune.

“I was really shocked because... I heard the shots (going) off and didn’t even know that my son was getting shot at the time.”

Her son was taken by a private car to Princess Margaret Hospital.

His mother said she went straight to the hospital, but was not given any information.

“My head was just pounding me. I left my son, my last son and my son who got shot, and then his girlfriend to the hospital and told them I was going home and if they needed me they could’ve called me.”

While at home, she learned her son had died.

She described her son as a quiet person, adding she did not know if he had any personal conflicts with anyone.

Percentie was one of four people shot on Monday, two of whom died, according to police.

Anyone with information on this shooting is asked to call police at 502-9991.