Insight: A Season Of Goodwill - You Can’T Be Serious 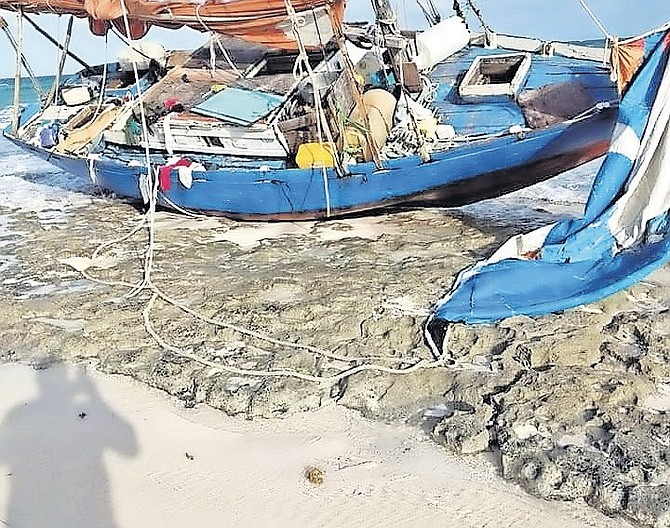 THE BOAT in Long Island on Christmas Day. 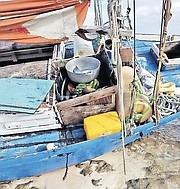 THE people of Long Island awoke on Christmas Day with a present from Haiti!

A small Haitian sailing sloop with dozens of human beings on board, landed in Clarence Town and were quickly taken into custody by Immigration and the proud residents of the island.

The sloop was promptly burnt to a crisp.

This “invasion” aroused the ire of the islanders.

In social media, the Haitian Haters went wild and let loose a tirade of xenophobic vituperation. One would have thought the end of days was near for The Bahamas!

As usual, always on the hunt to blame, they also turned their guns on the “Persons sympathetic to migrants” and I was of course named as one such “Sympathizer”.

Below is a little contribution I made to the discussion... if it could be called that!

I wished a Happy Holiday to my Friends and Family on what they called the “Wrong Island” for the humans who had the temerity and misfortune to land at Clarence Town.

I specifically referred to “My Family” because some of them hate that I keep reminding them my grandmother, Millicent Knowles, was born at “Simms” on Long Island.

I suggested “Persons sympathetic to migrants” are simply appreciating compassion for those who are less fortunate. 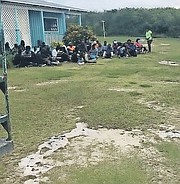 I suggested that in this Christian moment celebrating Christ’s birth, that racial diatribes, xenophobia, hatred and nastiness towards one’s fellow human beings was probably not the greatest expression of Christ’s message.

I continued to emphasize that much of the work that Human Rights Bahamas and I do, along with other alleged “sympathizers”, relates to respect for the rule of law and due process in The Bahamas. This was something I was proud to hear our Prime Minister, Dr. Minnis, pledge himself to when sworn in at Government House

Firstly, I don’t know who burnt the vessel, but if it was burnt on the orders of anyone from the government, that is firstly a crime and secondly unconstitutional in that it is a destruction of private property not in accordance with the law.

After a trial, a court could order the condemnation, or the Comptroller of Customs could do it, but there is a “due process“ which should be followed.

Secondly, I’m concerned as to whether or not flying a Magistrate down to Long Island and having a court hearing is really necessary and/or nothing more than form over substance. Will it be nothing more than a Kangaroo Court?

Will these peopl really be getting a fair trial?

Will they be properly advised as to what their rights are?

May some of them actually have been born in The Bahamas and are simply returning home as many try to do?

Often after having been illegally “expelled” - and I specifically use the word “expelled” - which everyone in The Bahamas is protected against by Article 25 of the Constitution, those persons try to return home.

Very rarely is any human lawfully “deported“ in accordance with the Immigration Act.

Will there be defence counsel appointed for them, just like there is a prosecutor persecuting them for the government?

Or is this going to be a Justice Factory Processing Farce?

What if they all pleaded not guilty?

Will the magistrate give them bail?

They are entitled to it! Everyone charged with an offence who pleads not guilty is entitled to bail.

None other than our former Chief Justice and President of the Court of Appeal, Gonzalez Sabola, gave hundreds of “Haitians” bail after a raid in Pinders Point in Freeport decades ago in a case which I did.

The law is clear. Everyone is presumed innocent until proven guilty!

What would happen then?

And, frankly, it really isn’t even necessary to have a court hearing. The Minister of Immigration under the Immigration Act, has powers to properly deport - not ‘expel”- people who have landed illegally.

But there is a process which has to be followed

I continue to harp on and emphasize “due process” because that is the only thing which will protect each one of us, Bahamian or not, when government overreach, abuse, fail to respect the rule of law.

Let’s not forget the frequent reports we see of police brutality, illegal seizure of property by the government, beatings - pouring Tabasco into a young Bahamian suspect’s eyes for three days in Eleuthera - false arrests, home invasions, immigration kidnapping of people off of the streets, holding people for up to nearly a decade in the illegal Carmichael Concentration Camp, denying them basic human rights, never taking people before a court of law to be charged after arrest, appalling prison conditions for thousands and thousands of our Bahamian sons of the soil, burning and bulldozing of organic communities like The Mud and Pigeon Pea in Abaco, political victimization, whole sale denial of women’s rights to have their husbands participate in the fishing industry, denying children born in The Bahamas of non-citizen parents the right, yes the right, to public education.....

Of things that can happen to any one of us, any Bahamian citizen, at any time and which all will acknowledge happens every day in one form or another in our beautiful country.

The fight to respect the rights of humans/persons who are regarded as the lowliest, the illegal Haitian migrant, is in truth a fight to ensure, in the long term, respect for the rights of each one of us, for “all persons” in accordance with Article 15 of our Constitution.

A breach of any one person‘s rights, which goes unchecked, or unchallenged, is a slow cancerous decay of all of our rights!

Thank you Mr. Smith for your commitment to this noble cause. It gives me hope for the future of our country. Our nation's values and justice system has numerous blind spots. Fear and ignorance is the cause of this resistance and hate.

At least it wasn’t a Trojan horse. They were journaling to the Great United States. Land of milk and honey . And soon to be ‘FORMER’ President Donald J Trump. Our problem has now become theirs again

Mr Smith should put his talents to help the govt stop this tirade of illegal migrants it will come to no good end.

Illegal Haitians bringing some nice covid19 and God knows what else with them. They're eager to get in the US, have Joe Biden make them citizens and give them free money. Once the Democrats take office in the US the Bahamas is going to get flooded with these people.

If you love them so much Mr. Smith, there are a couple thousand located in the Farm Road shantytown on Abaco that I am sure you could house in your Lyford Cay estate.

Fred Smith is a danger to the Bahamas. Let's send him back to Haiti. Let him try and teach the Haitians how to stay at home and re-build his (their) country. The Bahamas has its laws. Illegals are not welcome. Get your passport and visa and we will be happy to welcome you into our country .

I hate to think I may have no food to eat after government suspends its social programs at the end of March, as was recently suggested.

Bahamians will be begging Haiti to accept them soon enough, because one day we will be climate refugees. Global Warming, is a FACT.

What goes around comes around!

The Captain and crew of this sloop carrying dozens of passengers and landed thank goodness safely on shore need to be charged for endangering the lives of passengers carrying them in Bahamian waters.

All passenger carrying boats must have same passanger safety standards as Bahamian passenger vessels in Bahamian waters. Captain and crew must be be held accountable to the law.

The biggest Christmas present seems obvious that everyone on the sloop landed safely on shore.

There is a limit to accepting illegal immigrants. Even liberal Spain is starting to return illegal migrants to West Africa from the Canary Islands where they are occupying hotel rooms. Countries where there is unlimited population growth can only become a burden to their neighbours. France is loaded with illegal and legal immigrants, as is Italy. This cannot end well. Instead of the US invading Haiti and developing the country it has been left to fester. Yet, almost every day the missionary flights pass through Bahamian airspace on their way to Port de Paix or Cap Haitien with supplies. Downtown Madrid one sees huge banners on the tall buildings "Refugees Welcome" but the mass of the people have no idea what will happen when the number of immigrants grows to a critical mass.

illegal immigrants are not benefitting the bahamas . they just want to come so they can go to the USA , send them back to haiti altleast try and come legal not illegal!