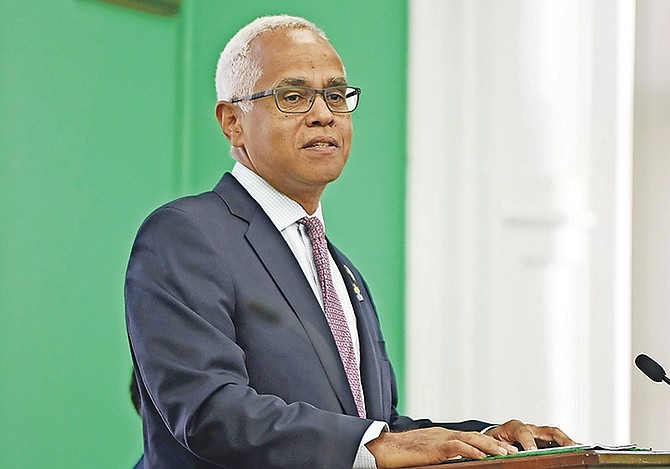 * Fears US may impose PCR test for returnees

The Bahamas saw total visitor arrivals for December 2020 slump by 95 percent year-over-year despite the re-opening of its two mega resort destinations and other major hotels.

The decline, described by Dionisio D'Aguilar, minister of tourism and aviation, as "abysmal but it's all relative", can be calculated based on the 35,000 health travel visas that his ministry approved for visitors during the month that included the Christmas and New Year's Eve holidays.

Those 35,000 stand in stark contrast to the 710,186 visitors that Ministry of Tourism statistics show visited The Bahamas in December 2019, equal to less than 5 percent of prior year totals in what was a record 12 months for tourist arrivals.

The data demonstrates how much ground this nation's major industry has to recover, despite the fanfare surrounding the re-opening of Atlantis and Baha Mar and the recall of several thousand workers, as it bids to rebound from the devastation inflicted by the COVID-19 pandemic.

Admittedly much of the year-over-year decline was caused by the total loss of cruise passengers, with The Bahamas receiving just over 570,000 sea arrivals in December 2019, and the statistics look much better when measured against the 140,121 air arrivals for that month.

Using that benchmark, the 35,000 tourist health travel visas are equivalent to 25 percent of prior year stopover arrivals. However, the 35,000 will include boating and yachting visitors, meaning that December 2020's air arrivals will almost certainly be more than 75 percent lower than the prior year's.

He acknowledged that the actual number of December visitors could be lower than the statistics show, since not all tourists with approved visitors will ultimately have travelled to The Bahamas, as external COVID-related factors outside this nation's control once against work against the rebound of its resort and tourism product.

Mr D'Aguilar admitted that the lockdowns, restrictions and surging COVID-19 infection rates in The Bahamas' core tourism markets of the US, Canada and UK were all weighing heavily on the country's bid to revive its economy, with those three nations all making a concerted - if not overt - effort to discourage their citizens from travelling abroad.

He added that the situation in the US, in particular, was "concerning" with more than 20m persons infected with COVID-19, some 130,000 hospitalised and 350,000 having died from the virus. And that was before yesterday's events on Washington D.C.'s Capitol Hill threw The Bahamas' major source market into political turmoil.

The minister added that, "on the positive side", resort operators and visitors had informed him over the Christmas period that tourists generally "felt safe coming to The Bahamas" and had been able to navigate this nation's COVID-19 protocols and requirement for a rapid antigen test after five days.

While high-end, niche resorts that cater to private boaters and aviation had fared particular well, Mr D'Aguilar admitted that The Bahamas has to "work on the middle market" that has traditionally formed the core business for the likes of Atlantis and Baha Mar.

"Those facilities that cater to more of the middle market traveller, they really found it more difficult to get up and running," he told Tribune Business. "That's the market we rely on and actually need, but they are a bit more price sensitive and have to come by commercial aviation, meaning they have to navigate the protocols more. That's the niche we have to work on."

Mr D'Aguilar acknowledged there had been "a significant drop-off" in tourism business since Monday, as the New Year's holiday weekend came to an end, which meant resorts such as Atlantis have been forced to return some staff to furlough.

And he voiced particular concern that the US might follow other major source markets, such as Canada, in requiring returning citizens and residents to take a COVID-19 PCR test within a limited number of days before they travel.

Such a requirement, Mr D'Aguilar warned, would be "significantly impactful" for Bahamian and Caribbean tourism given that they lack nationwide infrastructure to administer and analyse PCR tests, as well as provide results within such a limited timeframe. The cost of implementing such a system will also present a major hurdle.

"Canada has it, and the word being bandied around is that the US may require it as well," he told this newspaper of a PCR test for all returning residents, especially following the emergence of so-called "mutant" COVID-19 strains.

"That would be significantly impactful. It would put significant stress on us.. there are no PCR testing facilities in the Family Islands. If they require a rapid antigen test that would be more manageable, as we already have an in-country network rolled out with in excess of 60 testing sites."

Warning that the 2021 first half will be "rough" for Bahamian tourism, Mr D'Aguilar said: "Everybody is banking on the fact that hopefully by the middle of the year the roll-out of the vaccine will be sufficient to the point where people feel comfortable to return to some semblance of normality and consider travelling again.

"The first half of the year I anticipate will be rough, but barring no other strains of the virus, or complications with the vaccine; barring that I estimate things will probably get better as the year goes on. Our major source markets are probably experiencing the low point with the virus, but as they vaccinate 2-3m people a week, and the roll-out of the vaccine gets some traction, so confidence will return to travel."

And a Biden presidency in the US is readying itself to tax most Americans to death which leave them without the money they might have otherwise spent on visiting The Bahamas.

here's the thing.. I'm particularly disgusted by persons like Jamie Diamond and Bill Barr who supported all of Trumps wackiness and racism because it reduced their taxes and added money to their already overflowing pockets or elevated them to positions of power, then mere days before he's scheduled to leave office they express surprise that what this guy is doing is really dangerous. So many parallels. So Biden may take taxes to where they were under Obama when the economy experienced trenendous growth btw, but hopefully there's stability, hopefully a more sane and cordinated approach to the virus, like acknowledging it exists

You do realize that the USA has some of the lowest taxes of any industrialized country and that even holds true before Trump cut taxes.

these taboola feeds are skin crawling...seriously... but i guess its a way to earn income