Plp Chairman Calls For Government To Condemn Violence In U.S. 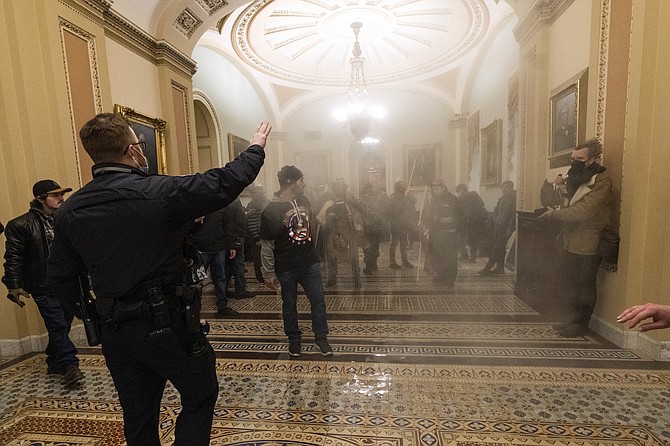 Smoke fills the walkway outside the Senate Chamber as supporters of President Donald Trump are confronted by U.S. Capitol Police officers inside the Capitol, Wednesday, in Washington. (AP Photo/Manuel Balce Ceneta)

A DAY after the dust settled on Capitol Hill, Progressive Liberal Party chairman Senator Fred Mitchell called on the Bahamian government to condemn the violence in the United States by Trump supporters.

On Wednesday, as America’s Congress convened to ratify President-elect Joseph Biden Jr and Vice-president-elect Kamala Harris, an angry mob of President Donald Trump’s supporters stormed Capitol Hill in what was an attempt to bully Congress to overturn the November 2 election results.

The horrific event unfolded when the lawmakers were having their say over the authenticity of President-elect Biden’s win in the state of Arizona. Thousands of men and women bearing the American flag stormed the federal building, overpowering law enforcement and causing elected officials to flee to safety.

Just hours before the violence erupted President Trump, his lawyer Rudy Giuliani and his son, Donald Trump Jr, spoke at a rally and urged their supporters to march on Congress.

Senator Mitchell said: “Consistent with the conduct and conventions of a free and democratic state, our government must be seen publicly to uphold the democratic norms, amongst them the rule of law and the peaceful transfer of power. There is a lesson to be learned by the Minnis administration in all of this.

“The public is reminded that we warned our government about walking in lockstep in the United Nations, in the Organization of American States and other fora with policies engineered in those fora which undermined these principles. What unfolded on our television screens on January 6 in the US capital buttresses our view that in these international fora it is important to stand for values as opposed to the convenience of ad hoc positions, based on craven supplications to powerful men.”

Mr Mitchell, a former minister of foreign affairs and immigration, continued: “In this regard, the Venezuelan policy comes to mind. We point out that the European Union has now reversed its position on recognising the insurgent team in Venezuela as the legitimate government of that country; that legitimacy was based in part on scenes in Venezuela which looked similar to scenes that played out yesterday in Washington, DC.”

In light of this, the party chairman said the PLP is inviting the government to also rethink its policy and realign itself with traditional policies of non-interference in the internal affairs of another country.

Minister of Foreign Affairs Darren Henfield said Thursday the situation was unfortunate but he is confident America will bounce back.

He said: “For us it was an anomalous event that we have not become accustomed to seeing in the United States of America. It is still unfolding and ... we don’t know what is going to happen after. We have confidence in The Bahamas that America, being the bastion of democracy that it is and has become known for throughout the Free World, would work through these issues and settle down.

“I happened to be up at about 4am or thereabout and watched the two houses of the United States come together – Democrats and Republicans – and put this issue to rest. So, we find that they were able to ratify the President-elect and the Vice President-elect and I am looking forward to working with this new administration.”

In a statement from CARICOM Chairman Dr Keith Rowley, Prime Minister of Trinidad and Tobago, the incident was described as a gross affront to democracy.

The CARICOM statement read: “The Caribbean Community (CARICOM) is deeply saddened and concerned at the unprecedented scenes that unfolded at the Capitol Building in Washington DC, USA, during the certification of the votes of the presidential elections by the US Congress.

“The storming of the US Congress was a gross affront to democracy and the rule of law in a country which has been viewed as a leading light of representative governance the world over. CARICOM looks forward to the restoration of order and the continuation of the process of transfer of power in a peaceful manner.”

Since the incident, President Trump, who had his account temporarily locked by Twitter for allegedly inciting the riot, released a video in which he said: “Like all Americans I am outraged by the violence, lawlessness and mayhem.”

He added: “A new administration will be inaugurated on January 20. My focus now turns to ensuring a smooth, orderly and seamless transition of power. This moment calls for healing and reconciliation.”

lol I'm sure America is just so very eagerly and impatiently waiting on the Bahamas to condemn, how will they ever move forward until we do

Not our business. We get mad when they interfere in our internal affairs, let them sort theirs out on their own.

there are events that external powers speak to that are not considered meddling. Insurrection is one of them

We need to stay out of it. trump needs no help from us destroying himself. The world knows he's a scumbag and the worst president in history. No need for us to get involved...

ahhhhhhhhhh,why? Why is this a story? This individual is playing politics and just using what happened in some other country to draw attention to himself.

Couldn't agree more! Mitchel is grandstanding. Ignore him as usual.

Stay out of it. Anything said will be twisted. People are twisting meanings these days 24-7. You cannot even say anything good now, that someone won't suggest that what you really mean to say was an insult or other defamation. That thing is over, and the time for discussion about it is also over.

Anything said - good or bad - will end up casting the Bahamas in a bad light. That is guaranteed.