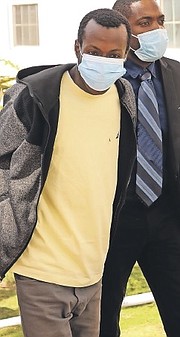 A 23-YEAR-OLD man was charged yesterday with murder in connection with a shooting that claimed the life of a teenager on New Year’s Eve.

According to initial police reports, shortly after 8 o’clock on the night in question, officers were alerted to gunshots by a Shot Spotter in the area of Rupert Dean Lane off Poin-ciana Drive. Officials said inquiries into the matter revealed that a man was shot several times about the body. The victim was taken to the hospital by a private vehicle and later died.

During the arraignment, Francis was not required to enter a plea and the case was adjourned to April 7 for service of a voluntary bill of indictment.

Due to the nature of the charge, he was denied bail and remanded to the Bahamas Department of Correctional Services until that time.