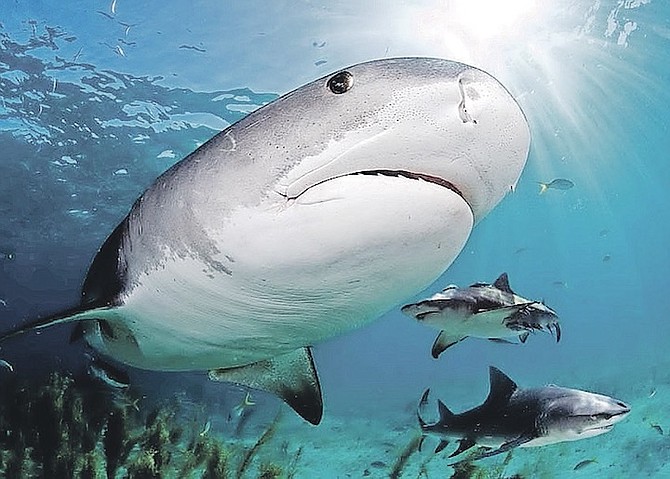 ALARMINGLY high levels of 12 heavy metals, including mercury, have been found in the muscle tissues of large reef and tiger sharks in The Bahamas.

Researchers from the non-profit organisation Beneath the Waves (BTW) say the discovery has important implications for human health insofar as sharks are consumed by people.

“Over the last century, human activities have rapidly accelerated the influx of metals and metalloid entering the marine environment, posing potential risks to biodiversity and food security,” BTW said in a press statement yesterday.

“Evaluating muscle tissue of 36 individual sharks from six species, the results from this study provide the first amount of metal concentrations in sharks sampled in The Bahamas, a relatively pristine marine ecosystem where sharks live risk-free in large marine protected areas. Sharks are not commonly consumed by humans in The Bahamas.

“As apex predators, sharks naturally bioaccumulate toxins in their bodies from eating other species of fish. While the impacts of shark health remain unknown, the concentrations of metals quantified as present in the study were determined to exceed the levels that are considered toxic for human consumption. The study also found that reef sharks, the more resident species, had higher mercury levels than tiger sharks, and that reef sharks’ mercury levels increased as they matured and grew larger.”

“Working in areas such as The Bahamas where shark abundance is relatively stable and healthy due to effective long-term protection is important for us to be able to establish these baseline studies. If the levels are high in The Bahamas, imagine what they could be in other parts of the world where sustainability and environmental conservation are not a priority.”

Researchers said while the human risks of ingesting heavy metals by consuming Caribbean shark species are clear, more studies are needed to “understand the pathways for how these metals ultimately enter into the marine food web.”

Jamie Fitzgerald, the general operations manager for BTW, said smaller fish species more commonly eaten in The Bahamas are also known to have mercury and other metals. However, she said their study focused only on the tissues of sharks.

In 2011, The Bahamas banned shark fishing and prohibited the sale, import and export of shark products.

For decades our sharks have been eating the toxic shiit dumped in our territorial waters by the cruise ships operated by Carnival, Royal Caribbean, etc. Now they're swimming in the toxic shiit being pumped into our waters in connection with BPC's underwater oil drilling operations. And let's not forget about all of the shiit that continues to be pumped into the Tongue of the Ocean by US naval submarines conducting highly secretive deep sea research and experiments under the auspices of AUTEC. Those poor sharks just don't stand a chance of living too long these days!

It's less likely to be an issue with waters around the Bahamas. It's more likely a food chain issue. Heavy metals are more likely to come from run-off in highly industrial areas. If the fish that sharks eat, migrate from those areas to the caribbean waters then the heavy metals in the bait fish will start to accumulate in the sharks. Either way, it's not a good sign.