Remembering Butch: The man who shared his heart and love to create a million memories 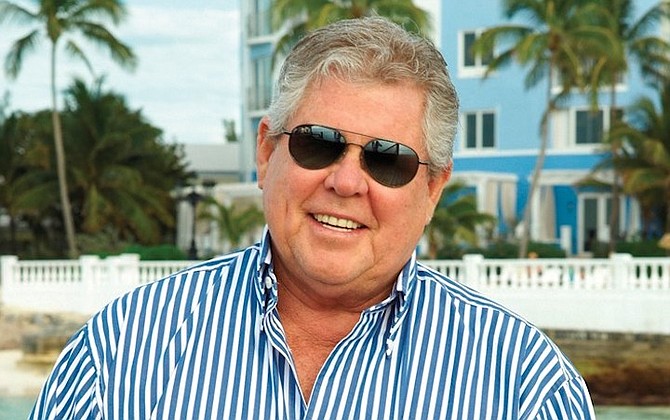 This week we lost a giant in the Caribbean tourism industry - Gordon ‘Butch’ Stewart, who brought vision and excitement, romance and luxury to the world of all-inclusive resorts.

Stewart, knighted by the Queen, founder of Sandals and Beaches, part owner or Air Jamaica, rescuer of tired properties and transformer of an industry that the region thrives on, passed away this week after a short illness. He was 79.

Below is from an interview I did with him in 2012. He won my heart that day and held it for years to come. I was not alone in crying at learning the passing of this giant of industry and lover of fishing, the gregarious visionary devoted to family, a man The Bahamas shall always hold in a very special place. There were two essential principles, he said, that every property had to have - beach and romance.

It’s 4 o’clock on a steamy Saturday afternoon and Gordon ‘Butch’ Stewart hasn’t stopped all day. He worked through lunch. As usual. He’s making plans for church, a 6:30 mass this evening. The phone rings again, he accepts a dinner invitation to an old friend’s house next door after mass.

He’s going to church tonight so he can go fishing early tomorrow morning without missing a catch, a prayer or a beat. Sunday afternoon he’ll be back at work, studying business reports, before flying off the next morning to Florida for a week when he will have to meet and handle the next round of offices and hotel visits and designers and chefs and marketing people and everything else that demands and wins his personal attention.

At 71, the best-known hotelier in the region, Butch Stewart, founder and father of the Caribbean’s most successful hotels, Sandals, shows no signs of slowing down.

Why should he? The hotelier without peer or pause loves what he does and it shows - in his properties, in Sandals’ accolades and awards, in over-the-top occupancy rates even in the most challenging economic times. And most especially it shows in the twinkle of his eyes.

Clear blue as the water below his balcony, warm and smiling, his eyes hold a world of positive promise. Here, they say, is a man happy with life, in love with his surroundings and their bright colours, not ready to rest, all of it a work in progress, still curious and very much alive.

We catch up with Butch Stewart at one of his homes, this one on Paradise Island in The Bahamas. Whistling distance from the omniscient pink presence of Atlantis, Stewart’s four-storey home is a world unto itself, filled to overflowing with colour. We ride up a slick stainless steel elevator and that’s the last symbol of sterile we see. We reach the top level with an expanse of living space that stretches from view to view of the surrounding waters. Tall panes of glass, deep emerald green walls with a suede finish, oversized glass dish sculptures on the walls in hues of blues and purples and golds, a huge custom-made circular carpet with red, tan and black swirls, custom-made upholstery on couches and chairs and pillows. And somehow all the colours and combinations work. Like living in the middle of happiness. For a moment, I envision Butch Stewart as a kid with finger paints and no supervision. Just mischief in his eyes and the knowledge he’s going to get away with it. Not sure if it’s the disarming cherubic face or the colour itself but suddenly you can’t picture him in a place without colour. Not surprisingly, it’s one of the biggest fights he has with his team.

“Designers,” he says, as if he’s speaking about unidentified flying organizers. “They all want you to go towards the sophisticated colours, earth tones, beiges, greys. They say it’s elegant.” He shakes his head as if those who like bland ought to be examined. “I like colour and I do have my arguments with designers.”

The very mention of designers is an example of how much the industry has changed since Stewart bought his first hotel in his homeland of Jamaica in 1981, not because he had any interest in hospitality but because the country was struggling and the family’s main business, appliances, could benefit from having a place to sell a surplus of air conditioners, fridges and other equipment to. It would not be the last time that Stewart’s purchasing power boosted, some would go so far as to say save, Jamaica from an economic tsunami.

“When we first started, you built a hotel room and said ‘What colour do you want to paint it?’ and you were done,” said Stewart. “Now, there are bathroom and spa designers and space designers. We have designers for the gardens, the pools, the restaurants.” One of his properties, the Sandals Grande Antigua Resort & Spa, has 11 restaurants. Sandals Royal Bahamian Spa Resort & Offshore Island in Nassau has 10 and every one is different.

Attention to design is not all that’s changed. Over the years, Sandals itself - a brand that has grown from the old Bay Roc and Carlisle Hotels in Montego Bay, Jamaica, to an empire of more than 4700 rooms in 22 hotels in five countries, serving more than one million guests a year, has catapulted from becoming the first all-inclusive resort when the term conjured up images of frugal to the butler-served all-inclusive where you never leave the property because there’s no place you’d rather be. Branding has changed and the hotels have evolved from the mid-90s names like Classic and Signature to Luxury Included® as the slogan in the 2000s to the most recent incarnation of romance ultra-suites, Love Nests.

“That’s what it’s all about,” he says. He is not exaggerating. Five of his properties this year have enjoyed a repeat visitor rate of more than 50 percent.

The success has not gone to his head. With obvious pride in his three grown children, all success stories on their own with the oldest Adam now serving as CEO of Sandals, and Robert ‘Bobby’ as head of IT, he laments the cost of his daughter Jamie’s wedding, acknowledging that Father of The Bride was his favourite movie. “I felt so sorry for Steve Martin pouring out his last penny, I wanted to cry,” he says. “Until my daughter got married and I felt so sorry for myself.” Crocodile tears about costs aside, he’s as proud of his pride as he is of his hotels. (Jamie’s since been featured in magazines including Haute). The dichotomy of financial prowess with the treasuring of simple pleasures -- a good day’s fishing, a great meal, a stack of architecture, fashion and motor car magazines while flying on his private jet -- keep him grounded.

Even today, as afternoon gives way to early evening and it is almost time for church, we are in a room with a dozen couches and thick upholstered chairs and art work galore, but most of the interview takes place where Stewart is clearly accustomed to sitting -- at a plain, small square table in a corner with a view of his 73-foot Hatteras below. A member of staff knows his habits, brings him a yogurt, no designer label, just plain Activia, a little bran on the side which stays there, and a black coffee.

The two local daily papers are laid out in the order he likes to read them. When the phone rings, he picks it up. ‘A-lo,” he says, the Jamaican dialect making distinct singing notes of what would otherwise be an ordinary hello. No pretences. He calls another member of staff to bring him the new cell phone he requested. It’s a bottom-of-the-line model with a single compelling feature. It makes calls. “That’s all I want,” he says. I tell him my husband shares his views of phones that do everything but the laundry. “He just wants one that when you use it, the person on the other end can say, ‘Datchu?”

“Your husband is a very smart man,” says Stewart. I’ll pass along the compliment.

A student at the school in the Graycliff.

When one school door closes, Graycliff opens another

If anything serves to demonstrate how shockingly different 2020 was from any other non-wartime year, it could be what took place day after day in an historic restaurant in Nassau.

Their classroom – one of the world-famous Graycliff restaurants where the generous Garzaroli family, who have operated and maintained the treasured properties for decades, hired four teachers and made sure every child had a hot breakfast and lunch along with staying current with their curriculum.

“Schools were closed and we worried about what would all these children who live near us do,” explains patriarch Enrico Garzaroli.

“So we opened the school in Humidor. We couldn’t operate a restaurant during the lockdown, but we could do something so we did.”

For daughter Roberta Garzaroli, a thank you poster with pictures of students and teachers taken throughout the months-long sessions “was the best Christmas present I ever got. It brought tears to my eyes.”

The upside of a down year

There’s always that annoyingly positive person who insists the glass is half full when you know d---- well it is half empty and doesn’t hold enough of anything to quench your thirst.

I’ve been accused of the former more than once but usually by people who don’t know me that well. Nevertheless, there must be something to that unwanted Pollyanna moniker because even I was able to come up with a few random thoughts about

the positive, or up, side of a down year.

Here’s the positive that 2020 taught us.

• Casual Friday became Casual Monday through Friday, leading straight into the weekend and the week that followed, which saved wear and tear on clothes and allowed us to divert dry cleaning funds to more important uses like wine.

• Dress to impress only referred to above the waist.

• We learned that projecting is not predicting and that Netflix was an essential service which accounted for its 26% audience uptick and title best performing stock of the year.

• And we came to understand that you can be concise and precise simultaneously, especially at the 39th minute of a Zoom call.

• Speaking of Zoom, the hottest four-letter word in the spoken language, cell phone etiquette gave way to Zoom etiquette and the green room morphed into the green screen.

Mostly, we learned that even if there were times they got on our last nerve, it was good to have our family by our side.