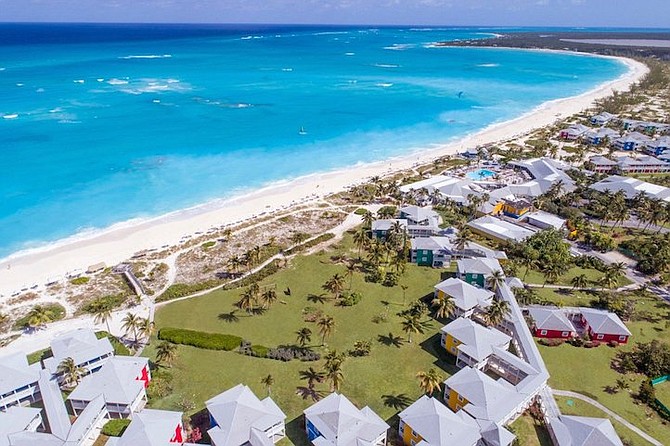 * Population drain fears as severance is paid out

* Employees given no hint of re-opening timeline

Fears were mounting yesterday that San Salvador will suffer a population drain as the island's Club Med "lifeblood" terminated its 190 staff amid warnings the resort may not re-open until 2022.

John Pinder, director of labour, told Tribune Business that the Government has been advised by the resort chain that it may remain closed throughout 2021 rather than re-opening in December as originally planned due to continuing uncertainties surrounding the COVID-19 pandemic.

These concerns were echoed by Darrin Woods, the Bahamas Hotel, Catering and Allied Workers Union's (BHCAWU) president, who said the all-inclusive property had not indicated a re-opening date in the termination letters handed to employees.

Confirming that the resort's staff, including the union's 172 members, received their due severance pay yesterday, Mr Woods said workers had received their notice and Christmas bonus the week before.

Club Med, in deciding to shutter the resort last September, had indicated it would seek to re-open its Columbus Isle property by mid-December 2021 in time to catch this year's Christmas and New Year's holidays. However, Mr Woods said: "In the letter to the employees they didn't give a date. In the original letter they said they don't see themselves re-opening before December 2021.

"We're very concerned. This impacts that island greatly. Club Med is the major employer on the island. In some instances you have a household where two persons are working at Club Med, and people who work elsewhere are also able to pick up additional shifts there during the day and night."

Acknowledging that many San Salvador residents may have to seek employment elsewhere in The Bahamas in the meantime, the union president added: "Where do you go in this environment? Where do you go? The only place to go is Nassau, and we have the same problem they have.

"I'm really, really concerned for that small community, especially with Club Med being the lifeblood for the island.... I can tell you that another blow to the hotel industry will take it right out and it will be another wash. We'll just have to wait and see how this unfolds at the end of the year."

The severance payout comes with San Salvador already reeling from its first confirmed COVID-19 cases. The island recorded its first-ever case on New Year's Day, and a second the following day, before a further four were announced on Wednesday.

This ties directly to the reasons cited by Club Med for closing Columbus Isle and placing it among the last of its resorts that will re-open once COVID-19 is brought under control. The resort chain, whose ultimate parent is Chinese conglomerate, Fosun International, said the property's remoteness and lack of healthcare infrastructure could endanger guests and staff if an outbreak occurred.

Mr Woods, disclosing that the union has a scheduled meeting with Club Med today to resolve "discrepancies" in severance pay calculations, added: "The reason why they said they are not opening is because of limited airlift, limited hospital beds and an inability to get healthcare right away.

"There's only limited healthcare, a clinic, on the island. Their thing is if something were to happen, their ability to get employees and guests proper medical care would only go so far." Club Med largely caters to a European client base, and guests would have a long way to travel with no frequently scheduled direct airlift if they were to contract COVID-19 and need urgent medical care.

Mr Woods said the hotel union had sought to facilitate talks between Club Med and the Government to see if the latter could provide support that would encourage a more rapid re-opening, and the resort chain had indicated the two sides met, but the severance payout suggested they were "not fruitful".

Mr Pinder, meanwhile, acknowledged concerns that Club Med's closure will take San Salvador's economy with it. "They did mention they were going to be severing the staff, and we were advised they were closing down until 2022," he told Tribune Business.

"That is certainly a concern as they were the major employer on San Salvador. They did not give any time as to when they will re-open. They just said they will probably be closed all this year and will re-open in 2022. They're just waiting to see how this whole pandemic pans out, and it is a concern with the number of persons on San Salvador needing to find employment."

While public works projects may provide some jobs, Mr Pinder hinted that alternative employment prospects were not promising "unless they're prepared to tap into fishing or farming". He added: "They may have to go somewhere else to find employment and find themselves in New Providence or the other islands. Displaced people again."

Dionisio D'Aguilar, minister of tourism and aviation, last year admitted that the Government had a “difficult mountain to climb” to persuade Club Med to re-open before December 2021 due to San Salvador's limited airlift and healthcare capacity.

"It's devastating for the economy of San Salvador for it to be that long," Mr D'Aguilar said then. "December 2021 is, as you can imagine, an exceptionally long time. It's 15 months, and Club Med is the single largest employer on that island, the only major employer. It's naturally devastating for the residents of that island.

"That's a very special situation given the fact the whole property's focus is on the European market. It's a bit different. Most of our Family Island properties are very American-centric, and it's so much easier and closer to come up with a 'Plan B'.

"If you're an American in the Out Islands it's much easier to get home if you fall sick even though it has to be by private plane. Most people if they're ill want to go back home, but if you're coming from France and Italy, which is the greatest source of visitors to Club Med, it's a long way away. You can't put them on a commercial plane, and you can't put them in our healthcare system as challenged as it is."

He confirmed that the main fears behind Club Med's decision were the inability of San Salvador's healthcare facilities to cope with a major COVID-19 outbreak, which was "compounded with the lack of international airlift" given that the resort operated just one flight per week in and out of the island from France.

"That was not considered sufficient," he added. "They're working their way through all the resorts in terms of what are the safest locations to open, given that there are not sufficient healthcare facilities on the island, given that there was no robust trans-Atlantic or international airlift, it reached that point where it ranked low in all their resorts in terms of opening.

"There wasn't much the Government of The Bahamas could have done in terms of removing those significant obstacles. They [Club Med] would wish for a scenario where COVID-19 is mitigated substantially, receded substantially or a vaccine is in place, would be my guess, before they go to a small remote location."

If one of the main issues is a lack of adequate healthcare and/or health facilities on San Salvador... how about fixing that problem? Why not build a new health facility on San Salvador? Don't the residents deserve that anyway? Aren't we living in the year 2021 and not 1905? Let's use this as an opportunity to bring San Salvador up to the modern times and improve their overall health system.

Costs would be the main issue. Looking online i see the population is around 1,000 (this is old though). Would putting a fully functioning healthcare facility there be worth it, or would that money be better spent opening another functioning one in Nassau. Maybe they should put one good one in Exuma which deals with the whole of the southern islands?

Maybe we could get Club Med to cover a portion of the cost? This might be especially attractive to Club Med since they have a substantial financial interest in San Salvador. Not too mention, to help ensure the safety of their employees too.