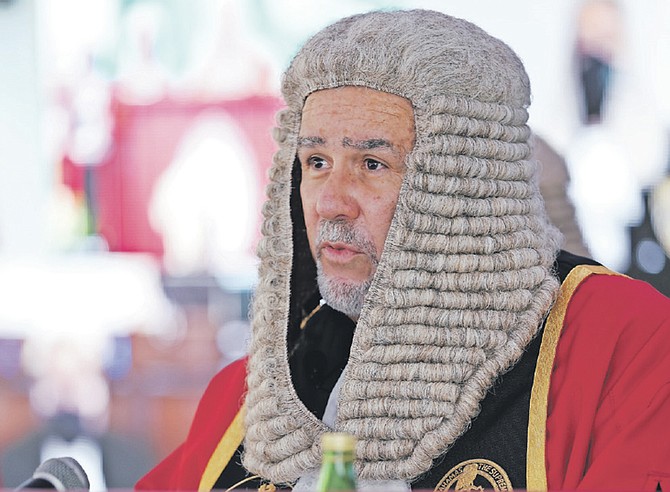 ONLY five percent of juvenile cases were completed during the last legal year, alarming juvenile advocates.

There were 1,348 juvenile cases in New Providence at the start of November 2019 and a net total of 386 new cases throughout the period ending on October 31. Only 73 cases were completed during the year.

Juvenile cases had the lowest completion rate of all case types listed in the annual judiciary report, lower than civil, criminal, family, immigration, National Insurance Board and traffic cases.

During the annual opening of the legal year event yesterday, Chief Justice Brian Moree acknowledged that “there are serious issues which must be addressed in the juvenile court”.

“This court deals with the future of our country, young people,” he said. “I have indicated to the presiding magistrate in that court that I intend to work with her and with the chief magistrate during the first quarter of this year to make significant changes.”

Chief Justice Moree said he might approach Attorney General Carl Bethel with proposed legislative changes that would enhance the court.

“There is a significant backlog that must be addressed. It is very possible that I will appoint a second juvenile court for a period of time although these are all matters which I will discuss with the chief magistrate and with the presiding magistrate as we move forward.”

Tavarrie Smith, a child rights lawyer and head of Project Youth Justice, an organisation that defends children and youth in criminal justice and child welfare matters, said the challenges facing the juvenile court existed before COVID-19.

“The juvenile court ought to have been one of the first and easiest courts to have made the pivot during COVID health regulations due to the fact that it is one of the few courts not ordinarily open to the general public,” he said yesterday.

“It has always been the law that the juvenile court is held in camera. The fact that it could not transition during COVID means that we must examine the entire juvenile justice system as it currently exists so that impediments are quickly addressed. The truth is, it is not a traditional court and until those in charge understand its uniqueness, it will continue to be challenged and fail in its obligations to meet the needs of our children and families.”

Mr Smith said officials have not presented a plan forward for the court.

“The result is that there are thousands of children out there with matters before the court who have no idea when or how or where their matters will begin proceedings,” he said.

He said Senator Bethel promised new juvenile facilities which, if delivered, would ensure the court is not subjected to crowd controls and health protocols “to the extreme level which we see at the Nassau Street Complex.”

“To date,” he said, “there is no plexiglass within the juvenile courts and those juveniles who are in custody still arrive in court shackled together. The reality is, the Nassau Street Court Complex is not a lawful or conducive environment for the adjudication of juvenile matters as it violates a number of local and international laws relative to the rights of the child.

“I know that the juvenile magistrate is more than anxious to resume matters and those of us who appear before her can vouch for her frustration at the delays facing her court.”

Mr Smith said the juvenile court should be relocated to a standalone facility, the juvenile panel should be replaced with a single magistrate who is trained in child rights law, a Minors Advocate Office should be established and a Juvenile Justice Act should be introduced “to cure the numerous defects with Part X to XIII of the Child Protection Act.”

“A failure to act and prioritize these issues opens the government up to liabilities for its failure to protect and enforce the rights of the child,” he said.

“The failure to give juveniles a quick and speedy trial is a violation of his rights under the Bahamas Child Protection Act and the UN Convention on the Rights of the Child.”