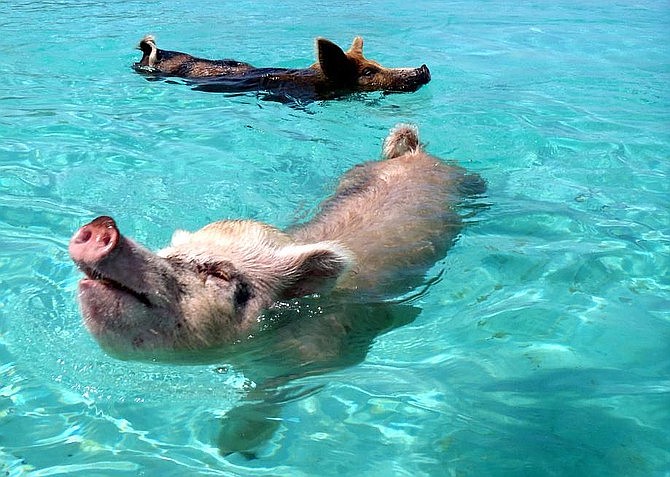 * Some object to $10 levy for their welfare

* But move backed by tourism and Gov't

Tour operators were yesterday urged to "show good faith and pay their way" by paying a newly-imposed fee that will help ensure the welfare of Exuma's famed swimming pigs.

Janet Johnson, the Tourism Development Corporation's chief executive, confirmed to Tribune Business that the Government was fully behind the move by the pigs' owners to levy fees on tour operators who brought visitors to Big Major Cay as a means to keep both animals and island in good health.

Responding to push back from at least one Exuma-based business, she told this newspaper: "There's an association, and they have been talking about starting to charge for the pigs' welfare. That's what it basically is all about.

"They've (the pig owners) formed a company and advised all of the tour operators that they were going to start charging on January 1 - $10 for adults and $5 for children. [Only] two of the operators are objecting.

"The money is going to the welfare of the pigs and for wardens to bring some order to the tour. The Tourism Development Corporation is fully supportive. It's long overdue, and the tour operators need to show good faith and pay their way."

Ms Johnson spoke out after Ray Lightbourn, Exuma Water Sports' principal, voiced his objections to paying the per capita fee - which is only being imposed on tour operators - to Tribune Business.

"Another issue going on right now is the swimming pigs at Big Major Cay," he said. "Some people claim they own the cay and are going to charge $10 per person to come and visit the pigs. Even if you don't come on the beach they want to charge you.

"The law in The Bahamas says you can go on any beach up to the high water mark. This just started on Monday. I haven't paid it yet, and am probably not going to pay it. They don't have a proper set up. Why charge an extra $10? It makes the place gimmicky.

"I asked them to show me the documents that prove they own the cay, but they told me to check with Lands and Surveys."

However, Bernadette Chamberlain, president of The Original Swimming Pigs Ltd, the company formed by the eight pig owners, told this newspaper that all Exuma-based tour operators had been fully informed of the plan to both levy fees and the amount months in advance.

Revealing that the owner of uninhabited Big Major Cay, the Gray family estate, was also involved with The Original Swimming Pigs Ltd, she added that none of the operators realised how costly and labour-intensive it was to keep the pigs fed, watered and in good health.

The swimming pigs have arguably become one of Exuma's major tourist attractions, and Ms Chamberlain argued that it was only fair for tour operators to contribute to the welfare of animals responsible for generating a significant amount of their income.

"This isn't anything new to the tour operators. We had a chat group with all of them and discussed this with them beforehand," she explained. Revealing that the discussions had started prior to the last COVID-19 lockdown, Ms Chamberlain said: "We told them what the plan was and wrote a letter to them, letting them know what the charge would be and what was needed to look after the pigs.

"A couple of them voiced opinions, a couple of them had problems with the $10 charge. Representatives came down from Nassau and Georgetown. They're fine; only two of them have a problem with it, saying they're going to the Government and that we are soliciting money and all that."

Ms Chamberlain, who runs Chamberlain's Cottage Rentals on Exuma's Staniel Cay, told this newspaper that The Original Swimming Pigs Ltd had already obtained the support of the Government for the levy - as confirmed by Ms Johnson.

She added that the pig owners, as well as members of the Gray family estate, had met with the Ministry of Tourism and its attorneys over the proposed scheme in advance. "They're working along with us," Ms Chamberlain revealed. "The Ministry of Tourism said to charge them $25 per head. We said that's way too much. We're the ones that brought it down to $10 once we saw what it takes to take care of the pigs."

While The Original Swimming Pigs Ltd was still analysing the true care costs, she said this involved quarterly visits by a vet; vast amounts of food and water per day; electrolyte shots and constant visits to Big Major Cay to take care of illnesses and cuts suffered by the pigs.

"These people don't have any idea what's involved in it," Ms Chamberlain said of the $10 fee's opponents. "They have no idea what we're going through with these pigs. None of us on the Board get paid but we have to run it as a business. All this talking, but they don't have a clue what it takes to take care of these pigs. We take care of them every day.

"We don't ask them what they do with their business. A lot of them started with one boat, but many of them now have three to four boats. That's from the swimming pigs. Many of them got rich while we did all the hard work."

As an example, she revealed that the pigs' two-and-a-half gallon water drums needed to be refilled four to five times' per day, requiring the presence of wardens to perform this task as well as preventing visitors from feeding the pigs inappropriate food and drink. Each vet visit costs $2,500.

Reminds when I bought my own printer and brought to work because the office printer was often out of supplies.

Soon enough I found myself surrounded by friends i never knew existed. These moppers went printing when I went out to lunch and drained my ink.

Some went even to HR to protest that I was keeping them from printing. The HR lady says: 1. Once it is in the office, everybody can use it. 2. the employer will not buy cartridge because they do not own the printer.

I took the printer home.

You all make a living of the pigs and do not even want to pay a little for the VET to keep them alive.

If it was a buggy horse it would collapse and die on Bay St.

Wonder if they pay for BLT when they go to restaurant? LOL

Total BS! These 'Original Swimming Pig' people are scammers. They don't own the pigs and can't even prove who owns the cay.

"Ms Chamberlain revealed. "The Ministry of Tourism said to charge them $25 per head. We said that's way too much. We're the ones that brought it down to $10 once we saw what it takes to take care of the pigs."

What a horse s**t statement. Only there to make it look like they aren't trying to ride the coat tails of the people who built the industry. They see someone make something good for our little country and can't help but try and 'get a little something for themselves' without doing any work. Anyone who knows the actual history of the swimming pigs and who started it and how they did it knows this is BS!