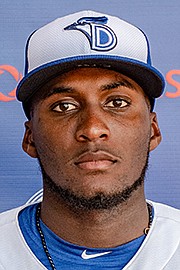 AFTER several delays to the start of the Australian Baseball League, Chavez Young finally had an opportunity to make his debut, but following an injury in his first at bat, the switch hitting outfielder has been sidelined.

Young got a hit in his first at bat for the Canberra Calvary in the season opener against the Melbourne Aces, but was thrown out trying to stretch a single into a double. Following the play, he displayed some signs of discomfort and was substituted out of the game and was seen in an air cast the following day.

He has missed eight games thus far and no timetable has been set for his return to the lineup.

According to “Future Blue Jays” - which offers news and analysis of Toronto Blue Jays prospects, Young has been limited with a nagging, but not serious foot injury.

“It turns out that Young is likely struggling with plantar fasciitis, a condition familiar to many athletes. The good news is that it’s highly treatable, but the bad news is that time seems to be a huge part of any recovery, Canberra staff don’t believe it’s a situation that would require him to return to the Blue Jays complex in Florida for treatment, but it’s no doubt a situation they are monitoring closely.

The Cavalry is 4-5 on the season but the amount of games played thus far has varied due to COVID-19 restrictions and a constantly evolving schedule.

While he has been sidelined, Young has become a fan favourite with the Canberra fanbase with his work as a commentator with the Cavalry’s announcing team.

Several videos of Young’s work in the commentary box have gone viral on social media for his colourful antics and use of Bahamian vernacular.

Young is ranked No. 30 on the Toronto Blue Jays’ prospect list, and joined a Cavalry club that has advanced to one championship series and three semifinal appearances in the last four seasons.

This season for the ABL features two conferences (Australian and International) with the traditional 40 games condensed to a 24 game regular season.

Young was called up to Spring Training prior to the COVID-19 pandemic and in his short time there, impressed the Blue Jays’ front office in the Grapefruit League both on the field and to move up the rankings on the prospect list.

It was his second consecutive offseason spent with the main roster in spring training.