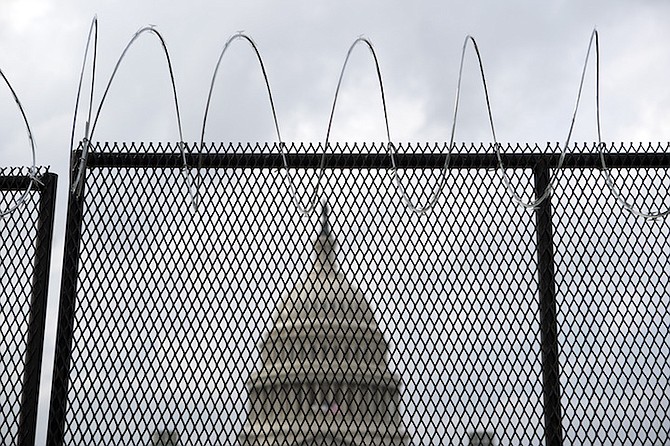 The U.S. Capitol is seen behind a fence with barbed wire in Washington Friday. (AP Photo/Jose Luis Magana) 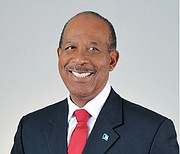 BAHAMAS ambassador to the United States Sidney Collie said all Bahamians living in the Washington area are safe as US fears mount over possible violence ahead of President-elect Joseph Biden’s inauguration on Wednesday, January 20.

Last Wednesday, a mob of Trump supporters stormed the US Capitol building as lawmakers were carrying out the ceremonial act of ratifying President-Elect Biden’s win.

The mob, fuelled by unproven conspiracies that the election was “stolen”, stormed the building to forcefully get Congress to overturn the results. After many hours, the military eventually gained control of the situation.

Five people, including a police officer, are dead because of the violence.

Armed forces and security have increased in the area in the aftermath.

“Everything you see in the media truly reflects the state and atmosphere here in the entire region – Washington, Maryland and Virginia. Ground zero is Washington and particularly downtown, Capitol Hill and the federal area,” Mr Collie said.

“The latest advisory coming from the mayor’s office today says residents and visitors should stay away from the downtown area. In addition we got advisories that most of the major roadways, in and around the Capitol and even extending beyond the Capitol, have been closed down.

“So the federal area, which includes the White House, the Capitol and a slew of federal buildings are all inaccessible. For us at the embassy as well as the consulate, we have no need to go downtown. We have been working remotely pursuant to the mayor’s order for two weeks now which ends on the 19th. And, I imagine she will probably extend that until after inauguration.

“We have two offices. The consulate is downtown and the embassy is on Embassy Row on Massachusetts Avenue which is not in the downtown area. We are all safe. We have sent out advisories to members of the diaspora who are in our database just to caution them to stay away from the downtown area and to stay safe.”

As safety concerns mount about more violence on Inauguration Day, Ambassador Collie said the best thing for everyone to do is just avoid the area completely.

He said: “(From) all accounts everyone is safe and doing well. We have a regular check in every day and everybody’s fine. The immediate staff of the two offices are on a group chat and so it’s very easy to stay in touch. So everybody’s doing well. It is more difficult to get timely information on Bahamians in the diaspora, but from all accounts from the information we are getting there are no incidents involving Bahamians.

“The area is very militarised and from all accounts there are about 20,000 National Guards, federal police, Capitol police and DC police and the FBI. I won’t go as far as to say it’s a war zone, but it’s very militarised. The best advice is that everyone just stays away from the area.”

The ambassador is hopeful that the city settles down and retains some level of normalcy on the days following the inauguration.

How the hell does this protected person know that all Bahamians, and there are a few, living in the DC area, are safe???

I believe the phrase "from all accounts qualifies that he doesnt speak.for every single Bahamian in the DMV. Idiot.

Speak for your idiotic self🤣