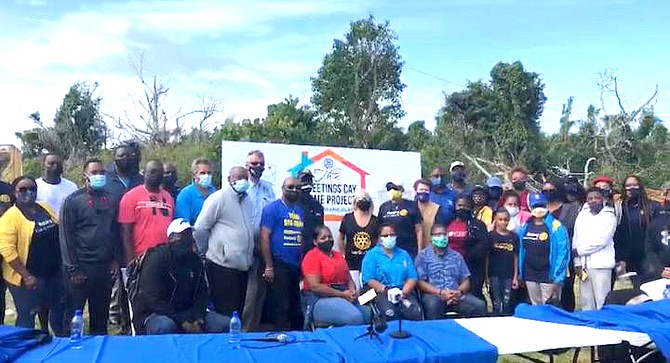 The Rotary Clubs on Grand Bahama have embarked on the Sweeting’s Cay Home Repair project to rebuild homes on the cay, where residents have been living in tents and displaced for the past 18 months since Hurricane Dorian.

Nine homes will be constructed during the first phase of the project, which is being undertaken and spearheaded by Rotary through funding provided by a private donor, the TK Foundation.

Rotarians travelled to Sweeting’s Cay on Monday, January 11, to officially announce the project to residents there who were very excited and eager about it. Nearly every structure was destroyed on the cay during the storm in September 2019.

Most residents who had evacuated before the storm are still displaced, living in Grand Bahama with relatives and in rental apartments in Freeport.

Chief councillor Gladstone Russell, of Sweeting’s Cay, said the community is very excited about the assistance the Rotary Club is offering. He said their prayers have been answered after some 18 months.

“Rotary has helped us with boat engines to get the fishermen back up and running, and now they are helping us rebuild homes,” he said.

The Rotarians will be staying on the cay, working 18-hour shifts six days a week until the project is completed. They have enlisted the help of contractor Cyril Harvey of Utmost Construction.

According to Rotarian Darren Cooper, one of the project coordinators, they will build two-bedroom one-bath homes four feet off the ground on concrete stilt beams, with hurricane impact windows.

Mr Cooper said they will also be putting in the sheetrock, and providing a functioning bathroom - toilet and face bowl, but residents will be responsible for the kitchen and installing the finished floor.

Rotarians will be staying in tents at the Anglican Church on the island.

“We are committed to the success of this project and building it within budget and on time,” Cooper said.

Contractor Cyril Harvey said that he is happy to be a part of the project. He said they will be using a two-bedroom government-approved floor plan. “We made a lot of changes to it, and the houses will be elevated four feet, on concrete stilts and concrete beams, and we will lay a stronger foundation,” he said.

Rotarian James Sarles, of the GB Rotary Disaster Relief Committee, said that, since Dorian, Rotary has repaired over 1,000 homes from roof repairs to muck and gut, and sheetrock installation. They have also rebuilt and repaired over 119 boats, and given over 60 engines in the east.

He said that the work continues through partnerships with private donors.

“We worked east to west since Dorian, but the one area that really was left behind by the NGOs and the government alike was Sweeting’s Cay. It is very difficult to get to the cay and those people, unfortunately, a year and a half later are still living in tents,” said Mr Sarles.

“Rotary saw the problem and evaluated needs and found a donor, the TK Foundation out of Nassau that wanted to do something for the east when they heard of the plight. So, Rotary put together a proposal and through funding provided by TK Foundation, we have launched a programme to build nine wooden hurricane-resistant structures for the neediest and, following that, another nine homes and other groups out of Nassau are looking to assist us. We are going to help them get out of tents and into homes and get their lives back,” Mr Sarles said.

Peter Turnquest, MP for East Grand Bahama, said the project would bring relief and restoration to the cay.

“We are all aware that over the last 17 to 18 months that you have had to endure significant hardship as your lives would have been turned upside down as a result of Hurricane Dorian. We have been the beneficiary of much generosity from various NGOs who have come in to assist with food, medicine, and other services,” he said.

“But the final hump is to build homes for those persons displaced at the moment. And, we are particularly grateful to the Rotary Clubs on GB and their sponsors who have agreed to come along and partner with the community and the contractor to rebuild several homes on the island.”

MP Turnquest noted that the rebuilding of the clinic is also needed.

“Hopefully, as part of this overall effort, we will also be able to have that work done, simultaneously, so that persons who are coming back, such as the elderly, will benefit from the presence of the nurse,” he said.

“We know other works are being done with water and electricity, which we anticipate will be restored soon by the time the homes are completed. I want to thank Rotary for all it has done. You’ve been a fantastic support for this island, and I dare say we could not be where we are today without your support, from the water plant, food distribution, and clothing distribution. For all the things done over the last year and a half, we owe you a tremendous debt of gratitude.”

Mr Turnquest encouraged residents to assist the Rotarians by being an active part of the rebuilding project on that island.