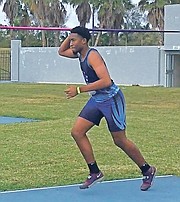 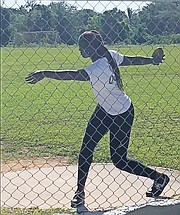 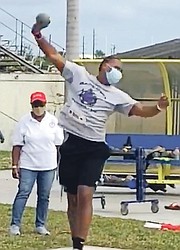 WITH competitions limited due to the coronavirus pandemic, the Blue Chips Throwers Club is all set to stage its first throwers meet at the original Thomas A Robinson Track and Field Stadium Saturday, January 30.

Club founder and head coach Corrington Maycock said there is a need for the throwers to have a meet to compete in so that they can remain in competitive form going into the season that includes the postponed 2020 CARIFTA Games in Barbados.

In December, the club hosted a meet where at least seven athletes from the Blue Chips (one of whom was too young) attained the qualifying standards for CARIFTA and Keyshawn improved on his qualifying performance in the under-20 boys’ javelin at the T-Bird Flyers Track Classic, the first meet held in January at the Thomas A Robinson National Stadium two weeks ago.

Maycock is anticipating that some competitors from the other clubs will surpass the standards in either the javelin, discus or shot put when the meet takes place from 10am to noon.

“The main thing I’m looking for is that other kids from the other clubs will come out and get better in the field events,” Maycock said.

“This is just to keep the flow going and to have such a long break in between meets. So this is like a filler.”

Based on the performances he saw in the last meet in December, Maycock said his throwers are back into the weigh-room, so he doesn’t envision any spectacular performances from them, but he noted that they will be in competition mode as they contest the four attempts in their respective events against their rivals from the other participating clubs in the under-15, under-17, under-20 and open divisions for male and female.

“It’s normally easy for throwers to qualify for meets like CARIFTA. That is why we have done so right at the beginning of the season in meets like these,” Maycock said.

“Track athletes have to run themselves into shape. The throwers have a different level of competition and the more they throw, the better they get.

“So we can’t afford to take off the time like the runners. They have to constantly compete to get better.”

Like the Bahamas Association of Athletic Associations has mandated for their meets this year, due to COVID-19 restrictions, the meet is off limits to any fans in the stands.

Only athletes and officials will be able to attend the meet.

Maycock said it’s expected to be short, so they are encouraging athletes who wish to participate to be on time to register, warm up and compete.

So far, the throwers who have qualified for CARIFTA are: