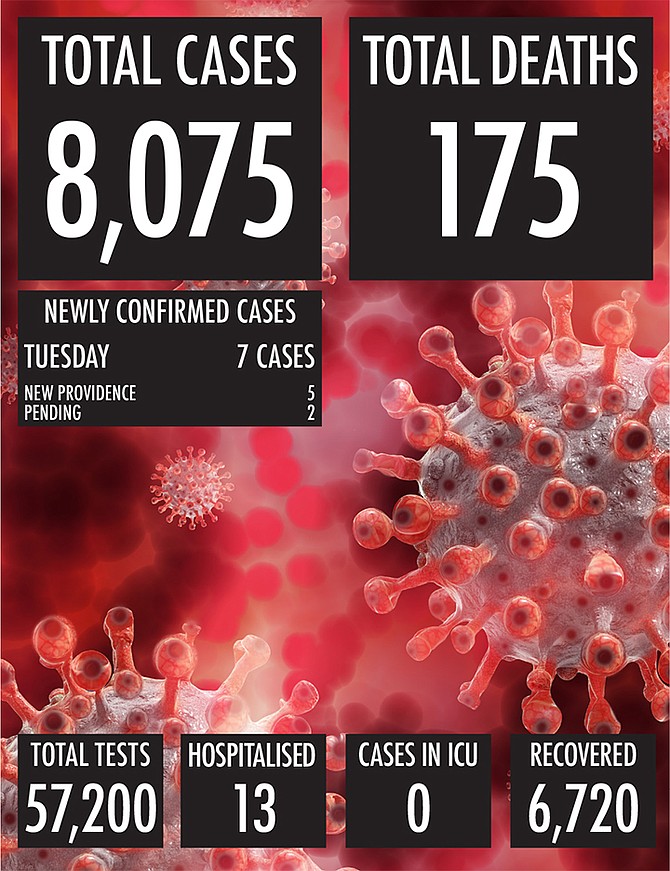 THE head of the Consultant Physician Staff Association believes more healthcare professionals should have been appointed to the government’s National COVID-19 Vaccine Consultative Committee.

The committee members were announced on Sunday. It is chaired by special health adviser to the prime minister, Dr Merceline Dahl-Regis while director of business development of Nassau Cruise Port Ltd Ed Fields is deputy chair.

CPSA president Sabriquet Pinder-Butler said she was a bit disappointed with the committee’s make-up.

“Certainly a bit disappointed that all of that information would not have been forthcoming and that the general main group does not have more healthcare professionals on that committee or something of this nature,” she said.

She added: “Well I thought that based on the composition there could certainly be additional physicians. . .Immunisation specialists, IV infections disease specialists, other persons that are involved with the healthcare team more intimately that sort of thing. You could’ve had experts from the various specialities of medicine including emergency medicine, family medicine….

“I expected more representation at that level on that committee.”

Although she is glad that the government has finally named a vaccine committee, she thinks it could have been done earlier.

“When we’ve been talking about vaccines roll-out I think from about last year and the government has indicated that they’re hoping by the end of the first quarter that they would have this in place, I would’ve expected that a committee would’ve already been formed even though it might not have been named.”

In a press release, the Office of the Prime Minister also said the National COVID-19 Vaccine Consultative Committee is currently working to finalise an operational plan to distribute coronavirus vaccines to eligible residents in the shortest possible time across the country.

Vaccinators are currently being recruited, who will be among the first to receive the jab once the drugs are available in the country.

As the government prepares for the arrival of World Health Organisation approved vaccines, baseline surveys have already been carried out among healthcare workers and the general public, OPM added.

The statement noted there also will be the formation of specific subcommittees made up of additional members of the public and private sectors for wider consultation and support where needed. Ms Pinder-Butler is hopeful that the subcommittee would have a better composition of people who will be impacted in the first instance by the vaccine distribution.

She indicated the association has not been directly contacted related to doctors receiving the first vaccines, but they have received an email regarding a survey.

As for the feelings amongst her members surrounding taking the vaccine, she said: “Yes, there would be mixed feelings because you know the information like I would’ve said we’re still getting feedback from persons who have had the vaccine, persons who are having different types of vaccines.

“So you know when something is relatively new, usually wait to see how it impacts persons who’ve had it to determine if this is a vaccine that you would be willing to take. Certainly I think most persons are willing to be involved with things that would (safeguard) themselves, their family, and the greater population.

“However, we all know that it’s still a relatively new vaccine. There are a lot of different things that are being worked out related to the vaccine itself and so I think it’s fair enough for persons to have mixed feelings as to whether or not they want to take the vaccine should it be available and which vaccine it is that they will be offered.”

It is a good thing that doctors are not the majority in this committee.

Doctors are too eager to lockdown people.

I am connected to PLP and FMN , hook me up with a high paying job, oh, I have no experience, but I am still connected.What you gat for me?

Don't need any doctors on the Committee because all we are doing is following CDC protocols. Anybody can follow protocols without thought. Here in the Bahamas if you are walking down the street 200 feet from anybody, you have to wear your mask. 1000 feet? Mask. A mile? Mask.

What more protocols you want? Next thing will be rubber masks to wear in the shower, and a nurse will have to observe your shower taking, to ensure compliance. Call 242-SHO-WERS to book your appointment - LOL.