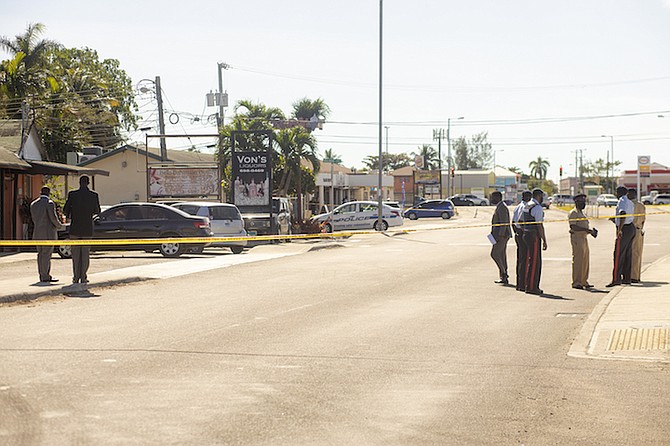 Police at the scene of the shooting on Village Road. Photo: Donavan McIntosh

A MAN is dead after a shooting at Village Road yesterday.

Details were limited up to press time, but police said around noon they were alerted to a shooting. Officers responded and were told the occupants of a blue vehicle approached a man and shot him multiple times in his body.

The victim was taken to hospital in a private vehicle. He later died from his injuries. He is the eighth person to be killed this year.

This comes three days after a woman was found dead in an area off Marshall Road with blunt force trauma to the head.

Assistant Superintendent Audley Peters told reporters at the scene that Monday’s victim appeared to be in her early to mid-twenties and was in the early stage of rigor mortis, suggesting she had only been dead for a few hours.

Anyone with information is asked to call the police at 502-9991 or Crime Stoppers at 328-TIPS.