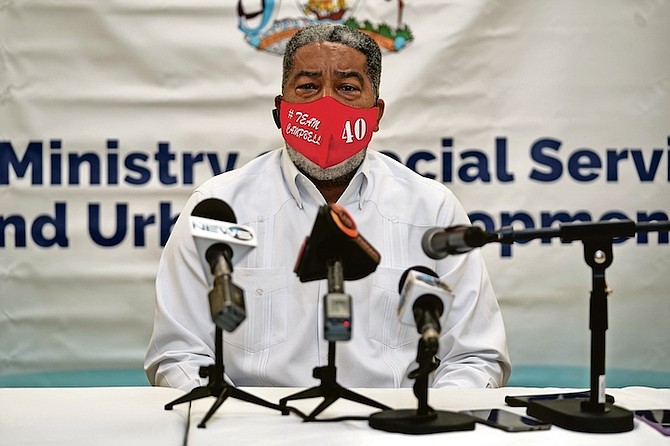 FOUR female staff members at the Children’s Emergency Hostel have been “relieved of their duties” after shocking surveillance footage showed numerous children at the care home being severely beaten.

In addition to the suspensions officials have turned the matter over to police for a full-blown investigation.

Minister of Social Services Frankie Campbell said initial investigations conducted by the Child Protection Council (CPC) revealed there was sufficient information to involve the Royal Bahamas Police Force, which will determine if more action is needed.

This comes less than a week after surveillance footage circulated on social media showing caretakers whipping a group of children with what appeared to be sticks.

Responding to the video last week, Mr Campbell told reporters that no stone will be left unturned in a full, impartial investigation held by the CPC.

Giving an update during a press conference yesterday, he said preliminary findings showed that more investigation was needed by the RBPF.

“The matter has been referred to the Royal Bahamas Police Force for an investigation,” Mr Campbell said. “I can advise that persons who were directly involved have been relieved of their duties pending the investigation.

“I can advise that I’ve been in communications with the chairman of the board of directors of the Children’s Emergency Hostel and they are fully apprised of what has transpired and where we are at this point.

“I give you the assurance myself as the minister, the ministry and the assurance of the board that we in no way form or fashion approval of any form of abuse of the children in our homes throughout The Bahamas.”

He said some 24 children are expected to receive counselling as a result of the incident, which is believed to have transpired sometime late last year.

He also suggested that more staff members could be terminated pending the outcome of the RBPF’s investigations.

“We’re seeking to use their counselling department. It is within the remit of the government, but it is independent of the Ministry of Social Services. I would also say that we have been offered some funding for private counselling, but we haven’t worked out the details of that so I’m unable to say if that is something that we would accept because the terms and conditions have not been discussed as yet.”

The minister could not say whether officials have uncovered similar incidents that took place in the past at children’s homes, only telling reporters that police will conclude the matter.

However, he admitted that the situation has forced the agency to review protocols to prevent similar incidents from happening in the future.

“We are very much displeased of where we are with this investigation, but we believe that this is an opportunity for us to continue the work that we’ve been doing – putting together a management agreement for all of our homes which has a component of discipline in it,” he added.

“But this is an opportunity for us to review our protocols and to ensure that there are no additional loopholes that would in the future allow for anything like this to happen. I’m satisfied that based on what we would’ve received from the National Child Protection Council that there is commission and omission, and we will await the report coming from the Royal Bahamas Police Force.”

Asked if anyone could face prosecution, he said that is up to the police to decide.

The Children’s Emergency Hostel is a quasi-government short term residential childcare facility that houses minors between the ages of 12 months and 12 years old. According to the minister, it is one of three homes that is government-owned.

Yesterday, Mr Campbell explained that only the administrator “has the authority to issue corporal punishment” at the home as a last resort.

However last week, child’s rights attorney Tavarrie Smith highlighted Section 27 of the Residential Care Establishments Act, which outlines how people in residential care are to be treated.

Discussions on corporal punishment on children have been reignited since the alarming videos surfaced online, with many calling for an end to the archaic practice in schools.

Asked about the ministry’s thoughts on the issue, Mr Campbell refrained from giving his position but only said a committee is reviewing disciplinary practices in children’s homes.

“I won’t give a definitive position at this point, but I would’ve indicated earlier that there is an ongoing committee that is discussing the entire question of a management agreement for all of our homes and there is a component in that agreement which will cover discipline and a position will be taken and I’m satisfied.”

Last week, Education Minister Jeff Lloyd told this newspaper that officials are having a “vigorous conversation” about whether corporal punishment should still be allowed in schools, but noted that there are some who are opposed to phasing out the practice.

The four suspended staff members are not the least bit worried about a police investigation because they know that many in our society, like Frankie Campbell, Paul Rolle and Jeff LLoyd, are incapable of distinquishing between corporal punishment and child abuse. The instigated police investigation of this matter is nothing but a political ploy and will not result in any serious charges being pressed or prison time for the abusers who no doubt for years have been engaging in child cruelty of the worst kind. Just think how many children have had their lives ruined by the physical abuse and mental torment inflicted on them by these most evil women. Truly sad.

I'm still somewhat confused on whether the persons who were "relieved of their duties" were suspended or terminated. Those two words mean 2 very different things, but are used throughout the article.

This investigation is designed to "go nowhere". . .persons who are chosen to investigate the matter are not the "best" persons to carry out professional child-care investigations!!

Any professional child-care investigators are pulling out their hair to see this group of "political hacks" who are all ways happy to sing for their supper brought up to the plate to do the investigations!!

These people have been around for years mucking up thing, ducking and dodging good and quality professional work!!

I have spend many years reviewing work by some of them. . .believe you me. . .they are usually "in the photo shoots" at the beginning of any real work. . ."gone with the wind" when time for real begins and "back in ya face" when the real work is finished. . .all grinning in the papers and thing!! BUT ONE THING REMAINS THE SAME. . .NOBODY CAN GLEAN A DANG GOOD PIECE OF DATA FROM THEIR WORK. . .THEN BECAUSE THE DATA IS USLESS, EVERYBODY "WALKS" BACK IN TO THE "BUSHES" AND FORGETS ANY REAL WORK WAS DONE!! No fair and balanced investigations will be done and they will give the "preconceived" conclusions they had when everybody was giving their opinions from day one!!

I was tempted to contact them because of the seriousness of this issue. . .then I decided that as in the past, political hacks are NOT there for good quality and professional work, work that will change things for the better. . .but they are USUALLY there "to be seen to be there". . .and they are placed there SO POLITICIANS can say: "we sent persons there". . .no more or no less. . .this is show only!! I have been around them long enough. . .I know the quality of work that will come from that group. . .confusion and "showboating"!! As for the particulars of the incident. . .THE WORLD MAY NEVER KNOW!!