Face To Face: A Leap Of Faith Put Ren On A Path To Self-Discovery 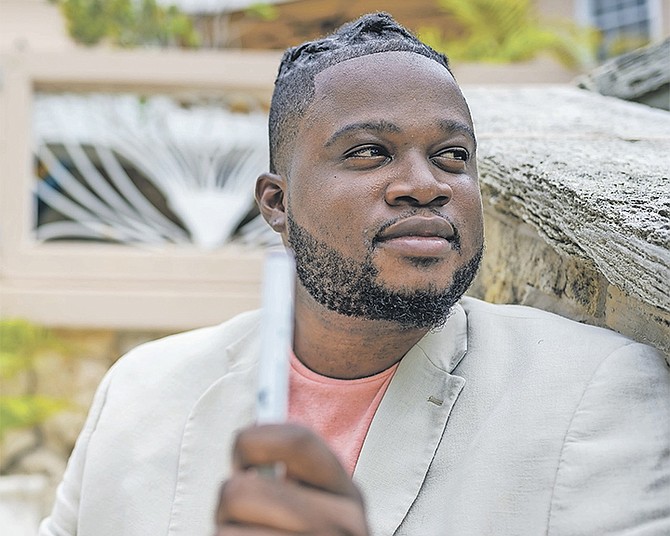 In the summer of 2018, my husband and I were attending the Bahamas Bridal Show. We were engaged at the time and it was just weeks away from our wedding. The bridal show was an exciting event and one we won’t soon forget. Among the memorable moments of the day was meeting up with Renbert “Ren” Mortimer, also known as “Waynehead”. The caricature artist was busy scribbling works of art in record time, giving couples a wonderful keepsake of the occasion. When it was our time, I was amazed that in just a few moments, Ren had already made a connection to us and by having a brief conversation with a huge smile, he was able to capture our spirits in a lovely caricature. He manages to exaggerate just the right facial features to encapsulate someone’s characteristics in such a way that the recipient can’t help but smile... even laugh at themselves.

This gives Ren life. He has found a purposeful path by moving away from what was expected of him to take a leap of faith into the world of art.

“I decided I wanted to focus more on people and the art of communicating effectively... connecting with people on their level,” he explained.

“I listened to my parents, I got my degree. I studied areas people thought I should. I have done what the system said to do, followed the status quo, and still I was not satisfied. I spent five years in the hotel; I have worked in managerial capacities. I have worked as a facilitator for young men looking for a better way. After doing all this, I can tell you there was no greater joy than choosing to believe in my gifts. My God-given gifts - the ability to draw, to think, to influence people through my story (as a motivational speaker) - those gifts have propelled me more quickly and more effectively than my resume ever did.” 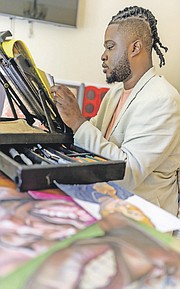 Ren got a full Catholic education as a youngster, attending Our Lady’s Primary School followed by St Augustine’s College. He went on to attend the College of The Bahamas where he obtained an Associate’s degree in Sociology and a Bachelor’s of Science in Psychology. He also spent time in Ontario, Canada at Brock University. Ren then found himself working in a major hotel, taking a path that could have resulted in a climb up the ranks of that institution for the rest of his career. But he started to see life differently years earlier. In fact, when he was a COB student, he started to see the system as something that impeded him from greatness. He became COBUS president, but had the unfortunate experience of being arrested.

“I remember my lawyer telling me to shut up, and that I was too smart. I decided that day that I wanted a different path in life. I have learned to write stories and illustrate books all off of learning basic skills. I am the man in the Bible with the ten talents who changed them into 20. There’s a quote I love: ‘ A jack of all trades is a master of none’. That half statement has been used to hold down creatives. The full statement ends: ‘Oftentimes better than a master of one’. So the people with many talents - the creatives - we are the ones who are always fed. We have so much to offer. We know photography, videography, graphic design, we are coming with so much more on our plate than they ask for. The business world is now crying for the creatves, the innovators. They can’t lock us down.” 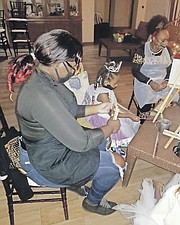 A FAMILY enjoying art at a Waynehead Productions event at Balmoral.

Eight years ago, Ren started Waynehead productions. What started as a hilarious nickname in high school because of the size of his head became the mascot for his growing business. Interestingly, Ren has been drawing exaggerated heads ever since! In 2017, I featured him in Tribune Weekend when he was deemed the “World’s Fastest Caricature Artist” by the International Society of Caricature Artists. He has travelled all over the world - throughout the United States, Mexico, China, Europe - and has done caricatures for thousands of people. He has proven that passion does drive and deliver a meaningful purpose. A simple love of drawing, coupled with a love for people and a desire to connect with them, has resulted in his business being a smashing success. But drawing is just a fraction of his focus. Ren has become a sought-after branding artist who has helped many of the major companies in this country launch and maintain successful advertising campaigns.

Even his old stomping ground called him back home. Ren is currently the Public Relations and Brand Coordinator for the University of the Bahamas. The popular Mingoes - the branding and concept, came from his creative lead and continues to develop successfully. Knowing the rocky path that led to his realisation of self, he spends much time ensuring the students there have a smoother journey to self discovery. 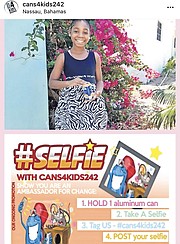 ONE of Ren’s most recent creative campaigns.

He takes joy in investing his time and energy into the students.

Among his other efforts at the school, he hosts the university’s Daily podcast ‘MINGOES Express’, the UB Alumni Talk Series ‘Dr Alumni’, and the UB Athletics highlights. He also hosts several other podcasts including his personal one - Creative Leadership - which also has a UB edition. His other podcasts include: Union of Students, From the Sideline, Off Season, For New Norm, and Show My Walk You Got”. It’s all in an effort to inspire people, he says, noting that “it’s not about the money” but about changing lives.

“I, too, went through trauma,” he shared.

“I am meeting with people, counselling with them, helping them deal with depression and suicidal thoughts. I have been through it, and I had to get counselling too. I want my life to be a testimony and inspire people to believe in themselves as I chose to believe in me.”

Ren has grown tremendously and continues to evolve not only as an artist and creative director, but as an innovative entrepreneur. He has produced scores of books for others, serving as writer for some, illustrator and producer. He has produced his own book as well, entitled “How to Tame the Beast”.

Since the pandemic began, Ren says he saw more people depressed and disillusioned and he wanted to come up with a way to help people to still connect, have fun, and find some stress relief amid all of the uncertainty.

He came up with the “New Norm Experience” a component of his RGMII Waynehead Productions Marketing and Animation company. It has been hosting a series of unique events since they were allowed to launch through the pandemic, assuring that all proper protocols are adhered to. One event was ‘Beer Yoga’, or ‘Sip and Stretch’ combines the therapeutic properties of yoga with a refreshing beverage.

Another event, sing and paint, allows people to express their creativity through art while being entertained by singers and motivated by psychologists and counsellors.

“Toote and Scoop” is where a musician with an instrument, currently a trumpeteer, performs while families come out and enjoy ice cream. Two of those have already been held, with flavours like sour sop and cotton candy ice cream being amongst the favourites. Waynehead teamed up with Siparoni for the popular ‘Sip and Paint’ events.

“Every event we have is not about emptying people’s pockets or making a profit,” he said.

“It’s about providing a safe and affordable experience for people who want to get out of the house. Costs start as low as $35 including everything. That has caused some people to think we don’t exist, but I can say with great confidence, once people see what we are giving, it’s about giving people great experiences with art.”

Waynehead works closely with Balmoral Club, which has provided the beautiful backdrop for the events. Ren now wants to make even more collaborations between music and art. Another event is “Bring Your Own Blanket” where families can come out to the beautiful lawn and stretch out on their blanket and enjoy the festivities. Sawyer Boy Entertainment Comedy Show, Collage Entertainment Reunion with Glen Sherman, Tyrone Burrows, Das Quay and Ross for fun filled comedy events. They are currently gearing up to host more Bahamian-centric events to help keep the culture alive, especially for young people.

There’s also a Dread Experience, Meet the Artist, and Gift - private workshop where talented Bahamians get to share their story.

“We want to be that positivity,” Wayne said.

“We want people to feel safe and also feel better holistically - not just in their body but in their mind and soul. We want to let them know they have the strength to make it through these challenging times.”

Find Ren by email: waynehead242@gmail.com or on most major social media platforms.