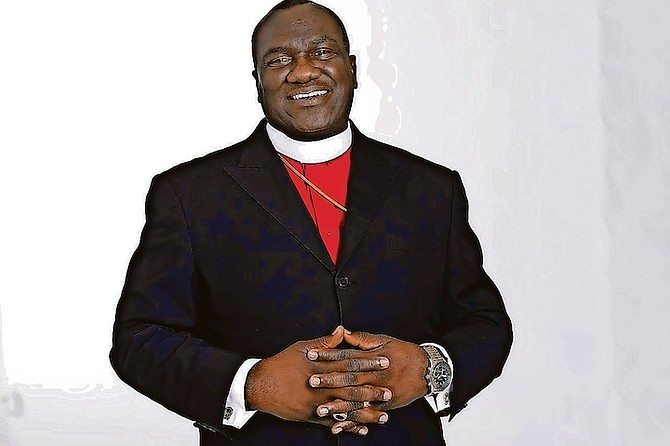 BAHAMAS Christian Council president Bishop Delton Fernander has questioned the government’s logic in placing a strict limit on the number of people who can attend funerals despite the fact that larger numbers are allowed to congregate in churches for regular Saturday and Sunday services.

He also highlighted issues with people not being able to hold memorial services without a body to remember the dead due to COVID-19 restrictions.

He said: “If you are saying that we can worship 300, 400 in large facilities on Sunday and Saturdays, we can’t do the same worship at the same time, same place to remember our dead and then go to the graveyard.

“We have got to have some logic to it. It cannot be just the Cabinet…dictate, stating things without running it by all the stakeholders.

“The state has responsibility when they make decisions, it has the openness of expression to help us realise... that while we can have the Saturday and Sunday service at the same time, but we cannot have without a service without a body to remember our dead and that can be expressed in a scientific way. We trained enough, we’re professional enough.”

After a warning from police about funerals on Monday, Bishop Fernander said all pastors are cautioned to not hold any services in contravention of the order.

However, while cautioning pastors, he said the council invites “no intrusion” of the state to become “the police of the church”.

“We also caution the state that they must make sure that the ‘funeral’ is not a service going on without a body that is happening in a sanctuary,” he said, referring to memorials. “That we don’t cross the line between church and state.

“We hear their rules and we will abide by the law of the land, but we invite no intrusion of the state to become the police of the church and we understand our role and pray that they understand theirs.”

In a release on Monday, the Royal Bahamas Police Force (RBPF) reminded the public that funeral services may only be held at the graveside with a maximum of 20 people in New Providence, Abaco, mainland Eleuthera and Exuma. Previously the maximum number of people that could attend a funeral at the graveside was 10.

Police said it came to the attention of the Commissioner of Police that pastors were officiating funeral services at churches in contravention of the COVID-19 orders.

Bishop Fernander told The Tribune the council is aware of the statement, released shortly after Prime Minister Dr Hubert Minnis made a presentation in the House of Assembly urging Bahamians not let their guards down –- pointing to recent funerals and Junkanoo parades in violation of protocols.

The police force was under fire back in September when a police funeral live streamed on the RBPF’s Facebook page showed more than 10 people gathered despite the COVID-19 Emergency Powers Order restrictions at the time.

The incident drew backlash towards the police for being hypocritical of trying to enforce orders yet not following them. Commissioner of Police Paul Rolle admitted that the event had exceeded the limit number and assured that officials will do their best to ensure a repeat does not happen.

A refreshing change to see. The photo shows a smiling senior member of the Bahamas Christian Council who prefers wearing a big expensive Omega watch rather than a Rolex watch.

there is enough space in graveyards for social distancing. so that law makes no sense that only twenty persons can attend.

but who can really expect any sense from this FNM government.?? T

What? When last you went to a graveyard?