Davis: Pm In Breach Of Rules 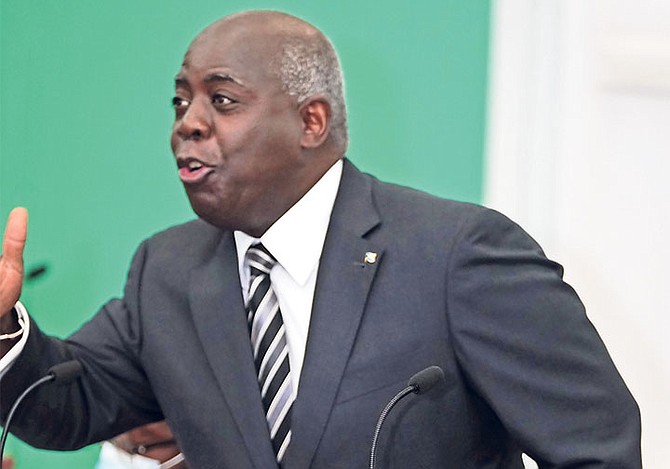 PROGRESSIVE Liberal Party Leader Philip “Brave” Davis claims Prime Minister Dr Hubert Minnis is in breach of the Emergency Powers (COVID-19 Pandemic) Regulations because he has failed thus far to submit a report to Parliament that details the “expenditures, suppliers for the goods and services procured and the reasons those suppliers were chosen."

The disclosure requirement is in Section 11.2 of the regulations.

Mr Davis' comment came during a debate in the House of Assembly yesterday on extending the emergency measures until May.

The PLP opposes the extension, with Mr Davis saying the pandemic could be managed through ordinary legislation.

“Twice the proclamation of emergency has expired – at the end of June and in November, and neither time did you comply with that requirement," he said. "Neither time. You are in breach of the law, sir. Why? What do you not want the Bahamian people to know about how you are operating behind closed doors?

“Which expenditures and which suppliers are so controversial that he cannot disclose them to the public, as he is so required? Perhaps we shouldn’t be surprised. Every promise ever made to the Bahamian people about accountability is sitting in the dustbin.”

When contacted for a comment on Mr Davis’ statements, Attorney General Carl Bethel said: “I am sure that the Ministry of Health can supply any procurement records.”

Yesterday, Mr Davis also said: “The same Prime Minister who is so quick to impose heavy fines on Bahamians for the most minor infractions is himself in violation of his own regulations.”

Noting he supported the initial emergency proclamation, Mr Davis said the measures were intended to be short-term, “a means of giving the government the flexibility to manage a new and urgent public health crisis.”

“Some ten months have passed since the Prime Minister appointed himself as the sole competent authority, and for ten months he has ruled without consultation, without transparency, and without accountability,” he said.

“Any new measures needed to keep Bahamians safe can be enacted through ordinary legislation. This government’s own attorney general has confirmed this.”

Mr Davis said Dr Minnis has once again extended for himself the power to spend public funds outside the ordinary procurement process, to punish and reward businesses and people, to pick favourites and to make decisions without having to debate or defend them.

He said: “The obvious question is: why is this Prime Minister so determined to operate without parliamentary oversight? The answer has nothing to do with public health, and everything to do with avoiding accountability.”

Question. Are there fundamental freedoms written into the colony's constitution?Shakehead a quick once for Upyeahvote, twice for Not?

Wow. Mr. Davis is once again making a mountain out of a mole hill. And playing politics with the lives of the Bahamian people. He should recognize, and I am sure He does, that Parliament and a Court of Law are two different things.

We have a pandemic that is currently destroying the health and wealth of our nation and this man is trying to score political points by turning to protocols which are irrelevant. One is tempted to think that he is mixing up his role as a parliamentarian and as a trial lawyer.

From a medical perspective, the empirical evidence shows that one of the lasting effects of COVID-19 on the individual is long term memory loss and confusion. And without wanting to wish this gentleman anything bad, I suggest he make a return trip to Florida to see a neurologist ASAP. This is because the signs of mental confusion are showing in his behavior.

I wish the gentleman well and recommend that he immediately begins a regimen of Turmeric and Vitamin D.

If the law should be seen as a mole hill, why follow any of them?

Our pandemic is PM Minnis and his enabling Cabinet. They all need a serious brain vaccine.

I'm trying to figure out what expenditures did emergency orders create that have to be reported?

FOI, FOI, FOI, Freedom Of Information, IS ALL WE THE CITIZENS OF THE BAHAMAS NEED URGENTLY, then everything will work itself out.

The spicey news be's startin' rollout tomorrow Friday goin' see the corrupted shutters across the colony flungin off and runnin' for cover. Shakehead a quick once for Upyeahvote cannot just be making such nonsense up. twice.

Pharmacudical companies stand to earn at least $150 Billion this year if they manage to vaccinate one half on the world’s population this year. And since the vaccines will be an annual event, go figure