Residents To Protest Over Issues In Abaco 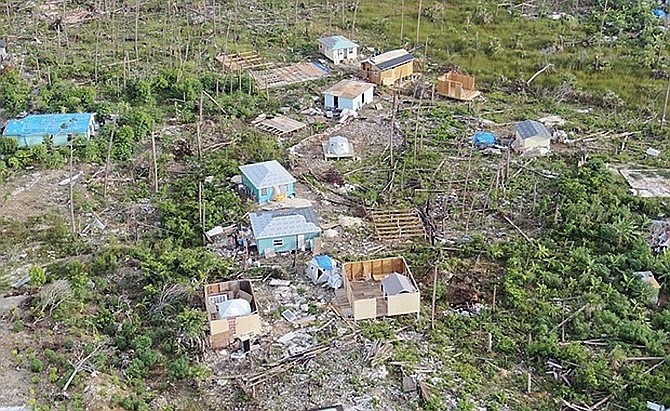 ONE of the issues residents are concerned about is new construction of shanty homes in the Farm Road area - pictured here last year.

A PEACEFUL demonstration is set to take place in Abaco tomorrow to allow residents to voice their frustrations about the post-Dorian rebuilding process as well as other issues.

Event organiser Crystal Williams told The Tribune she decided to host the event after being contacted by various locals, who said their cries for help have been falling on deaf ears.

This is not the first protest the long-time resident has planned.

Saying Abaconians are just tired and fed up, Ms Williams said they will be protesting against several issues like the immigration problem on the island and the government’s “failure” to live up to its promises.

She said: “This particular platform is set for persons to be able to speak their views on how they’re being treated… but for me, this platform is mostly about our immigration (issues).

“It’s as though the law is only put in place for Bahamians, but it shouldn’t be.”

Residents there have been sounding the alarm about the issue for months, noting the matter, if not dealt with soon, could mirror the pre-Dorian situation which saw several large unregulated shanty towns on the island.

“We did an aerial and when we did it, I wanted to faint,” said Ms Williams.

“Your eyes couldn’t imagine that all of that is going on in the back there...

“You have some of those homes that have metal on their roofs and we only had one NGO on this island giving out metal roofs so all of these things make you question which direction is the government actually taking?”

Added to these concerns, according to Ms Williams, is the need for further extensions of the Hurricane Dorian tax relief measures, which are said to be critical to the rebuilding efforts on Abaco.

The economic recovery zone plan provides businesses and homeowners in storm-ravaged islands with a variety of tax breaks and concessions.

While several tax concessions have been discontinued, the latest amendment to the Special Economic Recovery Zone Order allows for tax exemptions related to building materials, as well as the elimination of VAT on construction services to continue until June.

Construction services on Abaco and Grand Bahama will be VAT-free through June 2021 provided they are fully paid for by the end of September.

The import of VAT-free vehicles has also been extended for an additional month, which was initially set to end in December.

Ms Williams also said that residents there are fed up with the Disaster Reconstruction Authority.

The agency’s Small Home Repair programme was suspended after the suppliers did not receive payments from the time the initiative was launched last February.

However, officials have already said that they expect the programme to resume in a matter of weeks.

According to Ms Williams, protestors will also be joined by supporters of Bahamian Evolution, a group that has been agitating for change as it relates to the country’s natural resources.

“So, I’m expecting a great turn out,” she said.

It is about time the good people of Abaco make their voices heard! Not only immigration, but the ineptness of the government to help Abaco rebuild is a shame. Taking weeks for electrical inspectors to arrive, NGO water plants being shutdown making even drinking water start to be scarce. These poor people deserve better. Way better. If they don’t get the economy going soon they may hit the tipping point. And, the government reducing the tax breaks and only extending part of them for another 6 months when travel is difficult,expensive and almost impossible is another crime by the government!