DIANE PHILLIPS: What we should learn from the Surfside tragedy 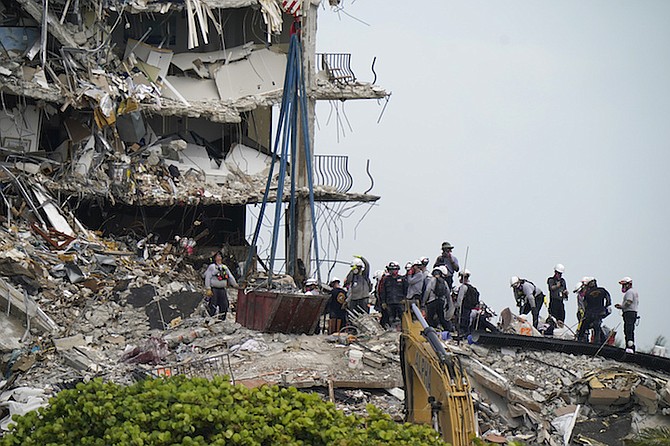 For days after a 12-storey luxury high rise in Surfside, Florida crumbled, leaving a scene that looked more like a bombed-out city in Syria than an upscale coastal town in America, we were glued to the screen. As the hours passed, the horror of what happened hit harder, loss of life climbed, hope of finding survivors waned.

Day One, one death, 99 missing, one 10-year-old boy rescued from the rubble. Day Two Morning, 102 unaccounted for, Day Two Afternoon, probable death toll rising, the number of missing soared past 150, Day Five, still more than 150 unaccounted for and hearts sinking. It would take a miracle to find even one person caught in an air pocket clinging to life.

It is likely to be months before an official report is released, but even before structural and civil engineers, architects and inspectors cull their findings, enough information sifted through the dust and debris for the general public to understand the cause of the collapse was, at least in part, due to a sinking foundation and long overdue structural repairs that had been bypassed.

The pancaking of the building indicated a weakening at the bottom. News reporters kept talking about the 40-year-old building as if it had built-in obsolescence like a toaster oven. Buildings aren’t supposed to deflate after 40 years. Look at the castles of old in Europe and the homes up and down the inner cities of the east coast of the United States that pre-date the invention of the automobile or the suburban spread that followed the mass production of the Model-T.

So, we ask ourselves: why? Why did this particular high rise, still a sought-after address right on the beach in the heart of an active community, suddenly do the unthinkable and just fall down? If it was sinking, if it was a victim of rising sea levels and previously undetected flooding that seeped through the spindly columns of its foundation, what does that mean for other buildings in the area or of the same vintage?

And what can we in The Bahamas learn from the tragedy of Surfside?

First, we need to take inspection seriously. Champlain Towers South, the building that collapsed on one side, had just undergone its 40-year inspection and reports emerged that a $15 million assessment was being levied over a multi-year payback period to make the necessary repairs. At this point, we do not know if correcting what appeared to be a steady sinking over a decade was among those repairs.

What we do know is that we have a lousy inspection process in The Bahamas. Actually, that is a misnomer. We have NO inspection of older buildings and to the best of my knowledge, the only part that gets inspected on an annual basis is the elevator and I can only assume, fire-fighting equipment like fire extinguishers in commercial establishments and resorts.

We only have a handful of our version of high rises on the beach. Why not require inspection of the foundation, concrete composition, roof, fire escapes, plumbing and common electrical every five years and a deeper dive with more extensive equipment every 20 years? The condo association would bear the cost as it should but inspections and the recommended repairs should be mandatory. What would happen to our tourism industry if a major hotel collapsed?

Our hearts break for those who waited as canine units sniffed for any sign of life and broke even more when they stopped sniffing, but for God’s sake, let us learn a lesson and make sure what happened in Surfside never happens here.

You can’t make this stuff up

This is a true story.

A man is driving his vehicle down Shirley Street. It’s mid-afternoon on a workday. A single police officer pulls him over.

Officer: Can I see your licence please?

Man: Yes sir, I just have to take my seat belt off to get it. It’s in my wallet.

Officer says “Do you know why I pulled you over?’

Officer: For not wearing your seat belt. Hands the man a ticket for $100.

See, you can’t make this stuff up, but guess who lost – good police officers who will no longer benefit from the man’s generosity toward the Police Benevolent Trust Fund or even a local station’s Christmas party. He will share any spare change where he will not be treated as a fool who is probably too polite to argue with police.

If you’ve noticed slight improvements downtown and somehow a few places look fresher, you can thank a group that has been working quietly behind the scenes. Called T-PULSE (short for Tourism Pulse), they are a diverse group headed by the most unlikely of people, unless you know her personally, a dynamic force of a woman driving a town car delivering instructions while delivering guests to a hotel or the cruise ship embarkation point at the British Colonial Hilton.

T-PULSE is on a mission and a roll – creating a clean island, and I wouldn’t be surprised if that involves a bit of name and shame. And it’s about time. So, congrats to them and to whoever sees them coming and clears a pile of trash, hauls away an abandoned vehicle or works with a neighbourhood or civic organization to make a difference where they are. Emai me if you want more info on how to help.