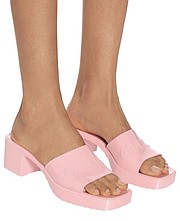 Looking for the perfect Summer footwear? Well, it’s time to look to the past (your past, if you’re over 40) and consider jelly shows, because those colourful plastic shoes we loved wearing as kids are making a huge comeback in 2021.

Jellies are popping up everywhere, ranging from the plastic flip flops that you can get for a couple of dollars, to designer versions retailing for hundreds of dollars. Gucci, for example, has a boxed, high-heeled mule version for just under $400. So, no, these are most definitely the jelly shoes of the 1980s. 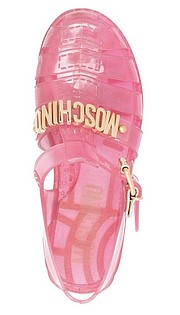 But like in the past, today’s jellies also come in a variety of colours, from clear to black, to sparkly, and in a variety of styles, making it easy to find one to fit your budget and taste. And they are being worn by all ages.

“I used to kill my jellies when I was a little girl,” said Tribune Woman reader Katrina.

“I had them in every colour. I loved the T-strap version and the flip flops. I was so excited when I saw some the other day in my three-year-old daughter’s size, who is a three in size. I can’t wait to find a matching set for me so we can be twins.”

“I like that they just look cool and sometimes you want a cute shoe instead of saying an open toe sandal and jellies are perfect for that,” said fashion lover Tracee. She has already purchased several pairs to wear this summer.

Gina, however, said regardless of the price, she thinks jelly shoes just look cheap.

“I didn’t like them growing up and I definitely won’t be wasting my money on them as an adult. They just look cheap, no matter how you try to style them,” she said.

Renata said that while she likes the look of jellies, there is a practical reason she can’t wear them.

“Jellies don’t breathe, of course, and my feet sweat and then the sweat rubs against the shoes and my feet end up just gross. Oh, and then jellies just end up smelling really bad and if any dirt gets inside them then you just have smelly dirty shoes, so they are a no for me,” she said.

While Paula agreed that the non-breathable aspect can be a problem with traditional-looking jellies, some of the new styles are much better.

“I’m really liking the new styles like the sliders and the wedges. Plus, if they do end up getting sweaty and nasty, you can just run water over them, and voila, good as new. The more open styles don’t have all the little, hard-to-get-to crevices,” she said.

No one can agree on where jelly shoes came from. Although they became a huge trend in the 1980s and could be sometimes be purchased for less than a dollar, it seems the T-strap variety, in the colours of black and brown, were extremely popular as school footwear in Australia during the 50s and 60s. Some think the shoes were first designed in France after World War II when there was a leather shortage in Europe. Another story claims they didn’t come into existence until the late 50s when plastic became more commonplace. The Brazil-based shoe company Grendene Shoes claims to have introduced jelly shoes to the US market in 1982, though a New York Times article published on June 1, 1980, also mentions them. Meanwhile, Juju Footwear claims to be the creator of the original British jelly shoe, having manufactured them for over 30 years now.

Whatever the story, it seems that like so many things from the past, nostalgia – and perhaps the cycle of fashion - has helped bring back and reinvent what once was a joyful childhood staple for so many of us.