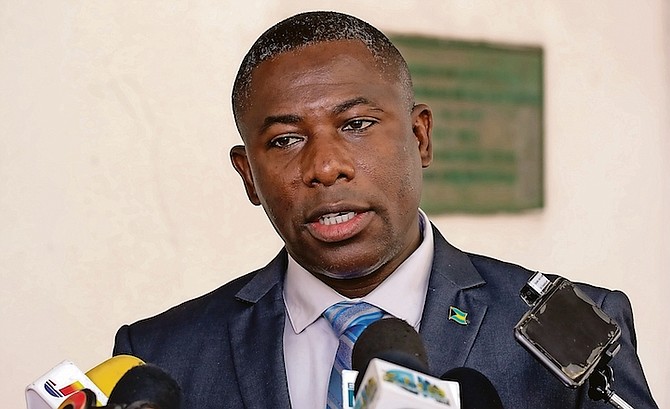 HEALTH Minister Renward Wells said the country is expected to receive its first doses of the Pfizer vaccine through the World Health Organisation’s COVAX Facility soon, with additional doses of the brand anticipated to arrive in the country later this year.

Speaking to reporters before yesterday’s Cabinet meeting, Mr Wells said the first shipment of the Pfizer vaccine will consist of 57,330 doses and added that officials are hoping to have those vaccines here by the end of the month.

“We will have a more definitive date when the Pfizer vaccine will arrive in (the) country by Friday of this week,” Mr Wells said.

“The COVAX Facility, through PAHO, has informed the Caribbean region as to what is available and the Bahamas has been offered some 57,330 doses of Pfizer through PAHO. “You would also be aware that we are entitled to some 33 plus thousand doses of AstraZeneca. The date for arrival of that vaccine is July 26 and so we are eagerly awaiting AstraZeneca on July 26. We’re also awaiting the update through CARICOM for the donation directly from the United States as to how much doses of that vaccine we will be receiving. We should have that update this week as well.”

The news comes amid concerns about low vaccine supply in the country, with vaccination sites only showing available bookings online until late July.

To date, the Bahamas has received 67,200 of vaccine doses from the COVAX Facility, with the remaining 33,600 doses expected to be delivered at the end of this month.

Twenty thousand doses were donated by the Indian government in March.

Yesterday, Mr Wells said the government continues to be engaged in discussions with its Caribbean counterparts to shore up on its vaccine supplies.

He also said the government is still in talks with China concerning its offer to provide the country with its Sinopharm vaccine.

“We are sourcing vaccines from everywhere we can possibly obtain vaccines under the. . .guidance of WHO rules and so we are looking to continue with our vaccination programme in country and I want Bahamians to go to the site and sign up and we will continue to vaccinate as vaccines come in country,” he said.

The Pfizer vaccine is currently approved for emergency use in children aged 12 and older.

In recent weeks, more young Bahamians have been catching COVID-19 and becoming seriously ill during the third wave of the virus than what was seen during previous waves.

The country’s youngest victim to have died from the virus is a five-month-old girl who passed away on June 26, according to health officials.

Yesterday, Mr Wells said officials will consider setting a portion of the Pfizer vaccines aside specifically for young children.

“We will most certainly take that into consideration as a part of the overall vaccination programme,” he said when asked about the issue. “You know our kids are going back to school in September so obviously, we need to be able to take that into consideration so that is one of the reasons why we sought to source Pfizer because Pfizer is the only EUL approved vaccine for individuals under the age of 18.”

The Bahamas has administered 97,992 doses of the AstraZeneca vaccine, according to the Ministry of Health.

Health officials said 60,303 people have received their first dose, while 37,689 have been fully vaccinated against the virus.

Asked if the government is still hoping to end the current state of emergency next month, Mr Wells said to his knowledge, there has been no change of plan.

He said when the emergency orders end, there will also be no vaccination day for fully vaccinated people as was previously announced.

“The state of emergency ends on August 13,” the Health Minister said. “If there’s going to be any change to that, obviously the competent authority, the Cabinet of The Bahamas would have to come back to the Bahamian people to say so, but right now there is no discussion about changing the fact that the emergency orders end on August 13.

“But if it was to change, the Government of The Bahamas will come to the Bahamian people in the shortest possible time and inform the country as to what direction we are to go in.

Since the pandemic, The Bahamas has recorded 13,233 cases of COVID-19. Of this count, 926 cases remain active.

Crap about vaccinating young children knowing the Vax damages their heart muscles. My fifteen grand children will not be vaccinated.

We can only hope the Communist Chinese Party has not ordered the making of "knock-off" Pfizer vaccine adhesive labels to be put on AstraZeneca vaccine dosage bottles distributed by the WHO/PAHO to third world 'beggar' countries.

Pretty sure that Europe,Canada and the US have not approved the Chinese vaccine…so good luck trying to go to any of those countries if that is what you get vaccinated with.

No vaccine has been given approval, all are simply under emergency temp use.

So what’s your point.

AstraZeneca is not even approved for emergency use in usa

After was rated as the most prosperous amongst Caribbean countries, is a painful read how we has been reduced engagement in a vaccines Layaway Plan, as we only means of purchasing lifesavers.
Wasn't it talked that the REDS had refused a vaccine offer from Bermuda, and which ended going to the Cayman Islands, yes?

Correction:
A donation of 9,000 AstraZeneca COVID-19 vaccines was generously gifted by the Government of Bermuda to Trinidad & Tobago, not the Cayman Islands, which arrived in T & T May 24, 2021, yes?

There was a student nurse in Brazil who rationed the vaccine and vaccinated ten people from the same vial and needle.

Had they not stopped her, she would have vaccinated the 5,000.

I'm happy for pfizer to be coming here. It has a better safety profile then the astrazenneca, that's for sure. Of course none of these should be mandatory and absolutely up to the individual to accept the risk.

The not-lawing of mandatory vaccine jabs are okay but only for as long as they at all times carry with them, acceptable proof of being medically certified to remain unvaccinated but for only as long as they don't engage in government nor private work, enter into business nor public premises nor be caught traveling nor attending private nor public functions nor events nor socializing nor seeking out PopoulacesPurses supported healthcare, yes?

I feel you Tal. The government's bullying definitely just falls short of mandating....

Why on earth aren’t we doing an national antibody test?

Latest from Israel 40% of those cases in the new wave of covid were doubled vaccinated...versus less than 1% reinfections or that were known to have COVID...

Dr. NIKKIAH FORBES saud that is just not done. It would be expensive.

Shush, many vaccinated never acquire antibidies. My brother had to get hepatitis vaccine ahead of surgery, backed by antibody test.

He was vaccinated 3 times and the medics said the vaccines were not kept at right temperature.

Ever think of the coolers in the hot sun while politicians take pictures ?

the truth about these vaccines is nobody knows. the long term effects that is. Because its impossible to know. The only thing they know is they stopped the deaths for now, which is good. What happens tomorrow? Hopefully God is with us.