‘Don’T Listen To Him - Only I Know The Election Date’ 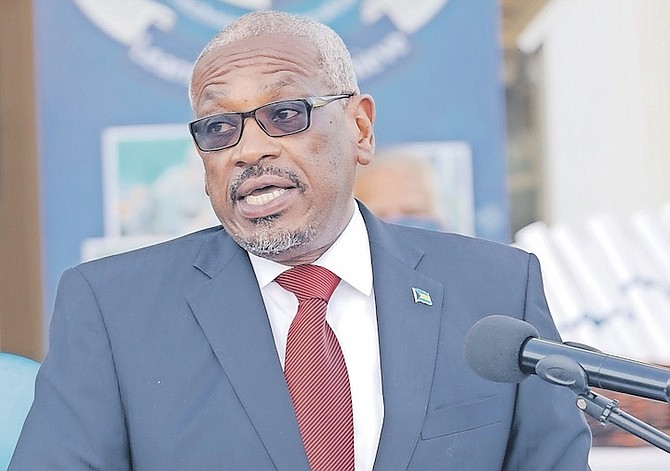 PRIME Minister Dr Hubert Minnis stressed yesterday only he knows the timing of the next general election, not Progressive Liberal Party Leader Philip “Brave” Davis nor anyone else.

His comment came after Mr Davis on Sunday said “all signs point” to the election being called this week with Parliament dissolved as early as today.

Dr Minnis, however, told reporters at Baha Mar yesterday: “Only the Prime Minister makes such decisions.

“The PLP, unfortunately, is always in denial and they have demonstrated that in 1992 when the FNM won the government, they were in denial and saying that it’s only temporary. They demonstrated that again in 2007 when they refused to accept defeat so I’m not surprised by the statement made by the leader of the opposition. But the leader of the opposition is not the Prime Minister. The Prime Minister makes those decisions, not him.”

Pressed on whether he will dissolve Parliament this week, Dr Minnis repeated: “The Prime Minister speaks, not the leader of the opposition. The leader of the opposition said there will be dissolution. The Prime Minister did not say that. I didn’t say we’re having an election now, you know. We’ve been campaigning, yes, but we’ve been doing it in a responsible manner.”

Although the next general election is not due until May 2022, some inside the FNM expect Dr Minnis will soon call an early election.

Yesterday, Dr Minnis also responded to Mr Davis’ claim that he will increase taxes if he wins the next election.

He said: “I note that the former Deputy Prime Minister who is now the leader of the opposition, he’s made a statement that we would increase taxes.

“Our tax plans were designed to stimulate economic growth in the southern islands and to ensure entrepreneurs get access to long-desired concessions. In keeping with our three-year fiscal strategy, our targeted measures to generate new revenue are focused on compliance and collection of existing taxes, and high-value, niche industries that are now paying their fair share.

If ever you needed proof of a politician’s motives, ie proof that the politician’s main goal is to use any and all possible power and resources to preserve their position.

A true leader would lead, and not need to manipulate the system to get re elected.

A true leader would set fixed election dates, not use his power to his advantage.

Any leader who believes in democracy would ensure that all major decisions to be made, that were not pledged as part of a political platform during elections would be decided via easily understood referendum.

Minnis is no leader, nor a champion of democracy.

Chucky so you're implying that just because Dr. Minnis refuses to have an early election means that he's incompetent? However, PM Minnis probably isn't ready to call an election yet probably not until next year in May 2022 when it's originally suppose to be

Just pointing out that Minnis is using his inside advantage, ie ability to call / control when the election happens as a tool to help himself in his re election aspirations.

A leader with the interests of the people would not do this.

A leader has no right to take any actions beyond what he promises to do as part of his election campaign. Ie if he ran on a platform of healthcare reform, he has no mandate from the people regarding vast changes of say expanding the debt to fund military spending, while cutting school budget. Anything major beyond what is proposed during elections must be put to referendum if a leader professes and wants to be truly a champion of democracy. Minnis has shown contempt for the will of the people since day 1

doc can not even get his own lies together. He said on the house floor he and they would decide when an election is called now it is only him. They have nothing to do with it.

As far as an increase in taxes is concerned. doc is a big liar. remember he was against VAT then he increased VAT by 60%.

That is him. That is his record.

When he says he is going east and then go west he changed his mind.

Thee might as well save his talking, except for his political lackeys, cause few amongst PopoulacesGeneral, does have reason to believe em's a single word.
Fact is, might as well hear it here, Even more than needed be will deaded'** from one the viruses, under a 35 House-elected and politically appointed red authority, yes,

Can anyone with a clear head believe Brave's PLP would have performed better than the FNM during this pandemic....most of the unvaccinated are proud clueless PLP

Your strong suit certainly isn't logic. Presumably you are aware that only about 10% of Bahamians have been fully vaccinated with these warp speed developed experimental vaccines that have been authorized for emergency use only by those who volunteer to get jabbed. And presumably you also know that most Bahamians are hesitant to get vaccinated out of fear of the unknown consequences down the road and great mistrust of the so called 'powers that be'.

Logically you must therefore believe that the 90% of the Bahamian population who are unvaccinated are "proud clueless" supporters of the PLP. I seriously doubt that but I'm certainly hoping most of the unvaccinated will vote for an independent candidate or not vote at all. A vote for Minnis would be a vote for the worst of all evils.

We talkin Brave and the PLP here... get real. So even you can not endorse Brave and crew. Who are these "independents" that can convince the unvaccinnated to follow science. At least Minnis studied science .....

What I do know is that the vaccines have had a 70, 80, 90% success rate in preventing Covid. I do know in the United States they report that 99% of current Covid deaths are the non vaccinated. In some States, no vaccinated persons have died from Covid in a month or more. Follow the science not facebook or loud mouths on comment forums.

I suspect you're either watching too much cable tv or visiting too many mainstream media websites that have a political agenda. And suppression of unliked news information of a factual nature is unfortunately the order of the day for most high tech and other corporate controlled media outlets.

@Quavaduff, explain how is it even possible that Brave, could've had less than zero stockpile vaccines?
Is not truth say that the deaded, and will still become deaded from amongst the PopoulacesGeneral is unnecessarily higher under the 35 House-elected, and politically appointed's red authority, yes?

Huh....put the rum down before you write Mon

Did he pay for the residents of Bimini? No, he did not a private company that cared about the people of BIMINI organized the whole matter.

The only thing doc can do better than most is tell lies.

Brave have the country running around in a frenzy to register because of his careless statement.....yet he is again wrong! I waited all day to get the announcement, nothing, but no surprise. For those who want him to run the country... here is another example of a clueless clown!

Wrong. It's the oppressiveness of Minnis that has the people all stirred up in a frenzy, and rightfully so.