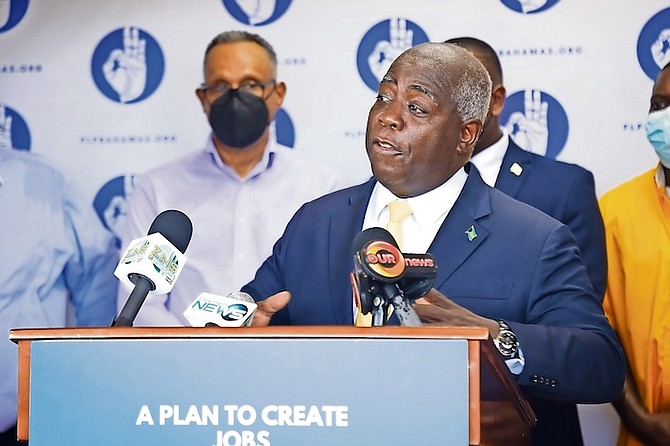 PROGRESSIVE Liberal Party Leader Philip “Brave” Davis has accused the government of voter suppression based on claims that Hurricane Dorian victims are expected to file police reports at their home islands as a prerequisite for voter registration.

Given the travel costs associated with the COVID-19 pandemic, Mr Davis said the requirement is burdensome and left no other explanation than there being an attempt by the government to exclude these people from voting.

Registration centres have seen an influx of people rushing to either transfer constituencies or register to vote after Mr Davis voiced an expectation that a snap election would be called this week.

Prime Minister Dr Hubert Minnis has dismissed the claim, saying only he knows when an election will be called.

National Security Minister Marvin Dames, who has responsibility for general elections, did not respond to inquiries up to press time.

“We are so encouraged by how many Bahamians have lined up at registration centres over the last two days,” Mr Davis said in a statement last night. “It is clear that Bahamians are ready to participate in the upcoming elections and have their voices heard.

“As a country, we can be justifiably proud of our history of high voter turnout.

“However, the legacy of fair elections with high turnout is now being threatened by the current government. In the last few days, we have had a flood of reports from voters who describe the difficulties they are facing as they attempt to transfer their registration because they have moved since 2017.

“The burdens placed by this government on voters who were registered to vote in previous elections but have now moved to a new polling division or constituency, are so heavy as to exclude a large number of Bahamian voters from the process. We have made our concerns known on multiple occasions.

“We are not talking about a small number of voters. We are talking about thousands – thousands displaced by Dorian, and thousands who have lost jobs during the lockdowns and therefore been forced to change their living arrangements. Haven’t they been through enough? Let me give you an example.

“A voter who left Abaco or Grand Bahama after Dorian and moved to New Providence, and does not have their 2017 voter ID, should, according to this government, file a police report in their original constituency, before they attempt to register to vote in New Providence. So, this voter is being asked to get a negative PCR test, buy a travel visa, and fly to Abaco or Grand Bahama in order to file a police report. They are supposed to do this in the middle of an economic crisis and a fourth wave of COVID cases.

“This makes no sense. The only possible goal here by the government can be to exclude these voters from the process. The right to vote is fundamental in a democracy.

“The government must act to lift these burdensome requirements immediately.”

Mr Davis continued: “If you can swear by affidavit to your current address as a first-time voter, you should be able to do the same if you are transferring your registration.

“If the government does not change these requirements, the only possible conclusion is that they are deliberately acting to exclude from the vote those Bahamians who have been displaced by Dorian or by unemployment caused by the lockdowns.”

Although the next general election is not due until May 2022, some inside the FNM expect Dr Minnis will soon call an early election.

Dr Minnis, however, told reporters at Baha Mar earlier this week: “Only the Prime Minister makes such decisions.

“The PLP, unfortunately, is always in denial and they have demonstrated that in 1992 when the FNM won the government, they were in denial and saying that it’s only temporary. They demonstrated that again in 2007 when they refused to accept defeat, so I’m not surprised by the statement made by the leader of the opposition. But the leader of the opposition is not the Prime Minister. The Prime Minister makes those decisions, not him.”

Pressed on whether he will dissolve Parliament this week, Dr Minnis repeated: “The Prime Minister speaks, not the leader of the opposition. The leader of the opposition said there will be dissolution. The Prime Minister did not say that. I didn’t say we’re having an election now; you know. We’ve been campaigning, yes, but we’ve been doing it in a responsible manner.”

Suppressing the poor black man and woman. The racist .