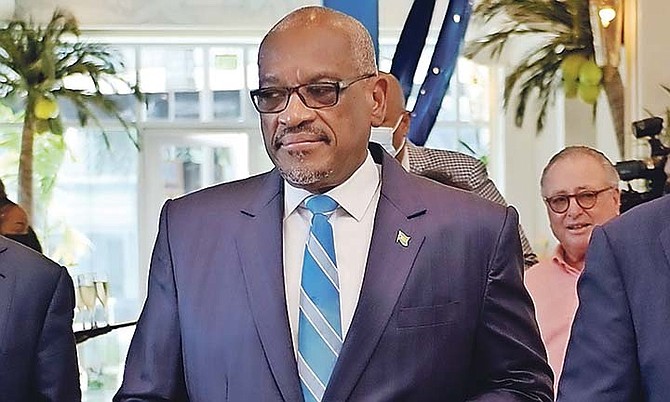 Prime Minister Dr Hubert Minnis at the opening of the Margaritaville resort at The Pointe yesterday.

According to a memo obtained by The Tribune, Ragnar Research Partners conducted 400 interviews between July 1 and July 6 by live telephone operators and asked the respondents if they approve or disapprove of Dr Minnis and Mr Davis.

The pollsters said: “Quotas on age, gender, ethnicity and region were used to ensure a representative distribution. The study’s margin of error is five percent.”

The poll comes as some in the Free National Movement suspect Dr Minnis will call an early election. Dr Minnis is said to be buoyed by the internal poll results and the FNM is expected to put the leadership battle between him and Mr Davis at the front and centre of their campaign. The party is said to be planning a short but vigorous campaign.

No public polls relating to the next election have been released to date.

Joey Gaskins, senior partner of Open Current, a research and government public relations firm, said yesterday that as with public polls, the methodology of internal party polls must be carefully scrutinised.

“Just because a poll is internal doesn’t mean it shouldn’t be trusted, although when internal polling is released it often comes with an agenda,” he said. “This is something to be especially wary of if only certain questions and not the results in their entirety have been released. Trusting a poll should be based on its methodology and how representations are made about the results of the poll based on that methodology.”

The FNM has relied on polls by Ragnar Research Partners head Chris Perkins before. A poll he conducted between November 29 and December 5, 2016 showed Bahamians disapproved of the direction the country was heading in at the time.

FiveThirtyEight, a well-known website that assigns ratings to pollsters based on the historical accuracy and methodology of an organisation’s polls, has assigned Ragnar Research Partners a B/C rating on the basis of two polls the company conducted in America.

“Any poll is worth something as long as you state the methodology so that any reader of the poll can take the right things from it,” he said. “We shy away from using a sample of 400 if it’s anything where we need the margins to be more specific and you want to get as granular as possible.

“To draw conclusions at the national level of a poll of 400 randomly selected people might lead to conclusions that are not entirely representative. The margin of error is five percent, so that could result in a ten-point swing. If you have a ten-point swing, that could completely change what you are looking at. At Open Current, when doing a national poll we try to make sure we’re using as robust a methodology as possible. With a representative sample size of 400, for example, Grand Bahama is only 15 percent of the population, so you would essentially have about 60 people representing 50,000 people. That reduces the likelihood that you will find 60 people that adequately represent Grand Bahamians from East to West End. A chunk of that 60 could be concentrated in one area and that could skew your results and looking at the margin for error for that subset, you may not be as accurate on the ground as you’d want to be,” Mr Rahming said.

For his part, Mr Gaskins said: “Any poll we do for public release, we definitely aim to use a sample size of 1,000. For us at Open Current, a poll of this nature can be very informative but we would not in our internal operations consider it to be decisive. At Open Current we think that polling as it relates to government and policy in particular, it’s an important part of the democratic process.”

A spokesperson for the PLP said: “This is a garbage poll with a non-representative sample conducted by foreign interviewers -- it does not reflect national sentiment. Bahamians have had enough of Minnis’s failed policies and contempt for the people. The FNM is lying about the poll just like they lied about a fixed election date -  just like they’re lying about not intending to raise taxes (again) on the small man. Lies are all they have left.”

The simple poll is enthusiasm on the streets. There is much disappointment and discontent reflected in Independence Day disillusionment and half of hard core FNMs are in shocked silence and 100% of PLPs that voted against Christie and Brave have returned to PLP, 100% swing voters have already leaned. Cruise Liner FNM has already sunk with plenty of us on board.

... the poll also showed that a mangy dog has a higher approval rating than Minnis. When the choices are Minnis or Davis its time to start praying for a miracle!

So, we still don't have a leader that the majority of us want? How many elections has it been like this? It is clear why they don't want us to be able to vote for a Prime Minister - because no-one they put forward would win.

Sickened I think Lincoln Bain would make a great PM.

Biscuit is better than crackers, any day

I'm just wondering if the votes will be counted here as safely and securely and accurately as they were in the USA last November?

Yes they will and they were in the US as well. tRump loss by over 8 million votes.

GuavaDuff your 1/2 right But let me help you!

Yes! I too hop that our scared electoral process remains uninfected with ills of power hungry decrepit. Furthermore, this shows the astuteness of our forefathers that drafted our great constitution, there are some flaws, but nothing that can't be fixed: amended or ratified!

NOW TO HELP EDUCATE YOU ON THE STATEMENT YOU MADE EARLIER

We must understand that presidency is done by a all or nothing system of state votes, which is my colleges. each college carry a weighted mean. It is not judged by popular vote but by college vote. Therefore when you make a statement that he lost by 8 million votes, its is deceitful if it is intentionally and you know better or it is bias rant of emotion and not knowing any better. But that is what this community here is about to help educate and help the blind to see, the lame to walk, the dumb to hear. In the words of Jay-Z, "You can pay for an education but you can buy class"! .

Our constitution tackles that clearly and decisively, HOA is not by popularity vote it is my constituency gained. Never loose site of the war when you are in a battle!

Minnis over brave is a as they say " a no brainer" ...if the PLP has any hope they have to drop any notion that brave could be a Prime Minister.

He should call the elections if he trusts these poll numbers...LOL

Agreed! I can't say whether or not the FNM or PLP will win the next election. But I truly believe that pigs will fly before Minnis wins his seat. With all the garbage Minnis has done, I don't see how he can win. Don't know where they getting the 54% foolishness from???🤷‍♂️

Before Republics conducted this polling, I hadn't known about there being 400+ residential landlines even to call up in Lyford Cay.
The Republican pollsters smart sufficient not to call landlines in Abaco and FREEport and surrounding areas where they'd been educated in a whole new local vocabulary tongue of, Go Fuc# Yaself and the THEE, yes?

Oh, really? Would any sensible person ever expect a poll conducted and paid for by Minnis and the FNM party to give the 'approval lead' to Davis and the PLP party? LMAO

This is what is called ‘manipulation of data’ or attempting to sway public opinion. First off, everyone knows both Minnis and Brave Davis are unpopular leaders. But while Brave Davis may be unpopular outside the PLP camp, Minnis is unliked even in his own camp. Now that being said, the question must be asked why did they poll about the popularity or like ability of the two leaders? The real question should be ‘ ‘ how will you be voting this election? PLP, FNM, DNA ir other… so one must guess they didn’t like the results of that poll… go get your vaccines and party till election!

Everything about that polling does not pass the smell test! It was like the polls and media input on the election of 2012 USA Presidential Race of Donald Trump vs. Hilary Clinton. Too many skewed and a poor ethical and moral approach. Shame shame on Ragnar, triple shame on Culmer and FNM for trying to play the Bahamian people and electorate as fools.

The biggest problems with this poll:

(1.) Credibility (2.) Independency (3.) Methodology (4.) Believability in the interpretation of the results. (5.) Format and Intent (Ethical approach)

The biggest issue by far, and they even know it via statistical means. Which is the Bahamian electorate is more than 100,000 and 1% of that is about 1K and yet they took less than 50% of that and used that as a sampling pool. It would not surprise me if a Bahamian files a legal case against Ragnar and worst is the case if it can be proven that the stimulus of this originated somewhere in Detroit, then we would have foreign powers intentionally and obviously interfering in a country's electoral process. the only way that it can be solved is legally in a court of law for the facts to come out. Accountability must be established and culpability commissioned! Come on man you can't fool bahamians that easily!

ADVICE TO THE FNM AND MINNIS MACHINERY

Drop down on your knees and ask for the people's forgiveness. Use the 2020 concept of the Baptized Prostitute becomes a Virgin Mary. Bahamian people are a forgiving people but they don't like to be played like a fool, because this dangerous love affair is beginning to become toxic and the jolted lover could end up doing very terrible stuff that may gain their way into Bahamian history if the FNM and Hubert Minnis try and play the people again. The Bahamian people just want Equality, Justice, Fairness and most of all Transparency and Accountability. There is a whole lot of Haitian descendance in the Bahamas and a disgruntled Haitian-Bahamian community at the brink of exploding and know you add the Born Here True Bahamian and things could look very ugly. (You get the picture?).