My Govt Car? I’M Looking To Buy It 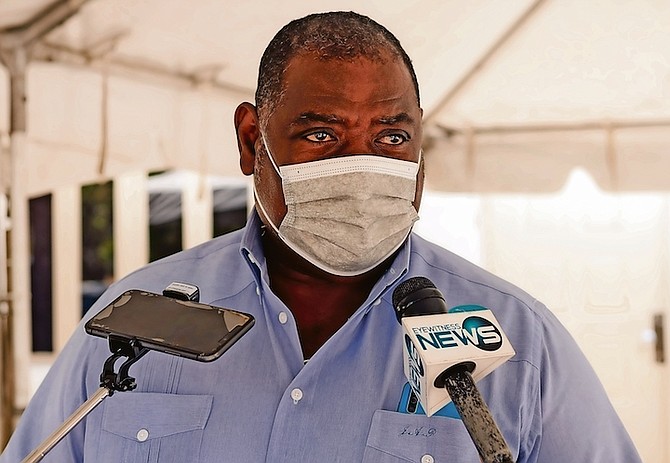 AFTER being accused by the opposition of being “deceptive”, John Pinder, the Free National Movement’s candidate for Fox Hill, said while he has retired as director of labour he still has his government vehicle because he intends to buy it.

Mr Pinder came under heavy fire from members of the Progressive Liberal Party who felt he should have resigned his post as director of labour the minute he was announced as a candidate in the upcoming election.

The PLP said its candidate for North Abaco, Kirk Cornish, an employee of the Water and Sewerage Corporation, was forced to take a leave of absence immediately after his candidacy was announced.

Mr Pinder was officially ratified by the FNM last week. He told The Tribune on Tuesday that he officially retired from the civil service this week.

However, Mr Pinder’s government vehicle was spotted at his Fox Hill constituency headquarters, with which the PLP took issue. Pictures of the vehicle parked at the building made the rounds on social media.

In a statement to the press, Senator Fred Mitchell, who is the PLP’s candidate for Fox Hill, said the vehicle is being used for campaigning, even though Mr Pinder is said to have retired from the public service.

“Clearly former labour director John Pinder, Prime Minister Minnis, and the entire FNM bunch belong together,” Mr Mitchell said. “Their political word means nothing. They are not to be trusted during this election campaign season.

“John Pinder told a national daily yesterday, 20 July, that he has officially resigned from the public service. Only to find that he remains campaigning in Fox Hill in the government’s vehicle.

“This is the kind of deceptive and abusive behaviour that makes John Pinder a perfect fit for a Dr Minnis led FNM. John Pinder is not fit to represent the people of Fox Hill in Parliament. And Dr Minnis is absolutely not fit to lead our nation’s future,” Mr Mitchell said.

Contacted by The Tribune about the accusation, Mr Pinder offered a simple explanation.

“... Presently it still has a plate (government red licence plate) on it, but I am in the process of purchasing it.

Mr Pinder, a former Bahamas Public Service Union president, is being accused of saying whatever sounds good in the hope of being elected.

“Dr Minnis, like John Pinder, is prepared to say whatever sounds good to get votes during an election campaign,” Senator Mitchell continued in his press statement. “Dr Minnis is again promising he will not raise taxes if re-elected. We know what he did in 2017 and he will not fool the Bahamian people again.

“The minute Dr Minnis got power, he increased taxes by sixty percent. The minute John Pinder was appointed by Dr Minnis as labour director, John Pinder betrayed union leaders and members throughout this country.

“. . .Dr Minnis, John Pinder, and the FNM cannot be trusted. We call on John Pinder to do the right and honourable thing – turn in the government’s vehicle. And again I remind Dr Minnis that he campaigned against the uncertainty of a general elections date in 2017. The PLP says – stop playing games Dr Minnis. Call the election. The Bahamian people want you gone.”

This story is hilarious. It’s way funnier than anything that guy who claims to be a professional comedian has ever posted.

This is corruption regardless of how John Pinder attempts to dress this up. He was actually doing well until he started lying

And the same can be said of Minnis who personally approved John Pinder being on the FNM ticket for the Fox Hill constituency. Corrupt to the very core.

There is nothing hilarious about any ex-government worker still driving about in a PopoulacesPurse's Fleet Motor Car, presumably with official government plates, affixed, yes?

Wow, this is just a tease of all the Redshi# the pro red mainstream media has been covering up that social media reporting has resulted in but em's being only the first amongst Reds 39 candidates to be forced resign even before assuming the job as an MP?
And, if you see a former Red candidate out there hitchhiking, honk ya horns. You just couldn't make this juicy pre-general stuff, up, yes?

The corruption is just so engrained.......

The whole exercise is rightly seen by the PopoulacesGeneral as one of the privileged taking advantage PopoulacesPurse while being permitted to continue to perform government responsibilities and enjoy all the perks of the job, all whilst actively campaigning for a seat nomination a political party, was/is/remains most questionable....even the more so when the political party, just happens also be in charge powerful instruments, including one weilding influence, as government, your damn employer, yes?

The forest for the trees?

Wow, does he really believe that people think it's OK to use a Gov't vehicle once retired? Mr. Pinder, you are no longer in Public Service & should only be using this vehicle once purchased.

@ComradeBobby2, oh yes, it's the Red Virus strain has spread throughout thee most privileged where rules are meant for enforcement against the LowerClassPopoulacesOrdinaries, yes?

While you are looking to buy the car why don't you leave the car with it's rightful owners - WHICH IS NOT YOU??!!??! When you buy it, you drive it.

Has you never heard of the PrivilegedRedClass, who exclusively can take advantage of the "Drive in Class, Whilst on PopoulacesPurse's Motor Car Payment Free Hire Purchase Layaway Plan," which also includes payment-free maintenance, gas, and Insurance.
@Comrade Sicken, shakes head** a once if you think, you shouldn't be engaged in the profession of just makin' this shi#, up, yes?

So he offered the car for sale ay? Set the price too ay? And was the only person interested in buying the car ay? Well , see you at the polls John.

whos been paying the gas bill? Not that the smart people have done a great job... but we dont need any more dumb people in power

Not to mention now in what now seems like measured in months since we've last heard a single peep out that other Government Director, who relocated to go live in the USA, all the whilst, remaining a livin' and, communicating from abroad Director, during a COVID crisis period and on the PopoulacesPurses's payroll?
Is he still too assigned a government fleet car, chauffer, free gas, maintenance, and insurance?
@AnyComrade, willin' shakes head a once, if you think you shouldn't be engaged in the profession of just makin' this double whammy government director, shi#, up, yes?

Yall following Fred in this foolishness aye? Yinna know how them government deals for directors them go. . .they can buy them carry them cars with them!! Fred knows that. . .after all it is his former deprtmrnt that is involved!!

In fact that is something public and private institutions do. . .perks for directors and other offficials them so!!

For the license plate being on the car still. . .YINNA DON'T ASK ME NO STUPID QUESTION PLEASE!! ARE WE SO DANG DUMB THAT WE CAN'T FIGURE THAT ONE OUT? READ MR. PINDER STATEMENT AND BOOM. . .THE ANSWER RIGHT THERE PEOPLE!!

And if he kept the government car like Fred says. . .WHY YINNA ROWING MR. PINDER. . .HE DON'T RUN MINISTRY OF LABOUR!!

As for campaining in the car. . .WHO GOES CAMPAINING IN A CAR. . .IN A LITTLE AREA LIKE FOX HILL? Any of yinna ever see any Bahamian political party campaining in a car??

As far as I ever saw them campaining, they are always on foot!!!

Yinna tell petty Fred to go sit he tail down and get real about his campain. . .WHO EVER ABUSED ANY GOVERNMENT PRIVILGES LIKE HIM. . .FLY AWAY FRED!! OR HE FORGOT?? He mussie forget which party he is in aye?? They wrote the book on abuse in governments!!

Lets deal with real issues and leave the dumb petty crap out of this cut behind one of their parties will get!!

Weeell muddoes, mudda tek sic! Mr. Pinder clearly indicated he has officially resigned from the public service" The red plate vehicle should remain under govt. custody for onward use or transferred over to govt depts critically needed for use, especially in areas where hospital, clinics etc nurses have to carry out duties using their own vehicles.. Thses red plate vehicles must be under some generall insurance coverage for theft, damages etc. and if the non govt employee gets in accident wrongfully who pays? Why should many other govt employees for years have to endure sacrifices, cutbacks in departments and those at the top getting "privilages" and where is it "privilages"documented? Not long ago Official supposed ""privilage" of having meals at restaraunt and govt entity having to pay for it was exposed by auditors which seemed to not been a "privilage." and wrong. Right is right an wrong is wrong.

....er, wasn't this very same Director of Labour months ago been telling nurses who have already done duties incl owed money for their own car use promised before and not paid and that govt dont have money. And the nurses been protesting in front of Parliament. Many nurses and people hurting.

I see yoon know much about how government do they cars them!! Government cars don't get insurance to be on the street. I do hope you can read. . .cos ya acting like you can't understand!! If ya driving a government car and ya "buck-up" you will fix that car yasef!! You are either ignorant of how all executives in government or private get treated by their work places!! Some places buy their gas for the cars given to them by the company, take the car with them when the leave the company, school fees paid, family group insurance, cooperate credit card, family travel and live in them expensive homes out east and west or PI!! Bouy either you is so dumb or you playing the thing wid two big ears them so!!

Fred Mitchell got those same privilages as well. . .so did his party peoples dem!! Cooperate and gov levels executives getting "gravy" deals in their employments is a global pratice. . .how come yoon know this fella?

Take for instance the president at UB. . .almost a 1/2 million a year, car, house out east paid for by gov, cooperate card etc. Thats ha they do things dese days boo!!

You been living in the bush too long aye?? Is it fair to the "lil" man. . .perhaps not! But don't talk like it een what alla dem does do!!

You need to ask Fred about his 1st class travels, hotels, restes and the likes!!! I never thought that he was over extravegant and wasteful of public funds. . .even though some did think he was (dem FNM of course)!! Obviously those funds were made avaiable for him. . .he took full advantage of them. . .good for him!!

This one with this car thing is just that. . .Fred talking nonsense. . .hipocritical nonsense!!!

@licks. WEEEEELL,......WHAT ???, WHAT???,.....WEEEELL...MUDDA TEK SIC..!!!!!!....THANK YOU...Thank you, thank you, thank you.licks2. Sincerely, thank you for bringing dis all out. I an plenty Bahamiams obvious condemned to live in da bush wid all dis done been going on. No wonder where the VAT GONE and Bahamians cupboards bare. Thank you licks2 for bringing this all out.