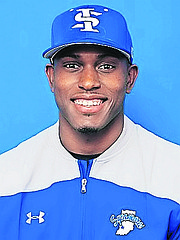 ELLISON Hanna II earned an opportunity to enter the professional baseball ranks with the Missoula PaddleHeads of the Pioneer League.

Following the first Pioneer League tryout, Hanna was one of three prospects chosen by the Paddleheads to join the franchise, based in Missoula, Montana.

The Pioneer League is not affiliated with Major League Baseball (MLB) but is an MLB Partner League. Formerly known as the Missoula Ospreys, the franchise was an affiliate of the Arizona Diamondbacks from 1996-2020. Both “Jazz” Chisholm Jr and Kristian Robinson spent their respective rookie seasons with the Ospreys. Following the restructure of Minor League Baseball out of the COVID-19 pandemic, the Pioneer League was converted from an MLB-affiliated Rookie Advanced league to an independent league and granted status as an MLB Partner League.

Hanna, a 22-year-old outfielder, recently completed his collegiate career with the Indiana State Sycamores in the NCAA Tournament’s Nashville Regional.

He hit .429 in the Sycamores’ three tournament games before they were eliminated and scored five runs. He went 3-4 and scored two runs as his team opened play with a 7-6 loss in the first matchup against Georgia Tech.

He followed with a 3-4 night and three runs in a 9 -2 win over Presbyterian to stay alive in the bracket and went hitless in the second loss to Georgia Tech.

The Sycamores finished the season 31-21 and were runners-up in the Missouri Valley Conference Championships.

He finished the 2018 season with a .318 batting average, 15 doubles, 10 home runs and a pair of triples for a .573 slugging percentage, 55 RBIs and scored 45 runs and 12 stolen bases in 59 games. He transferred to the Division I level at Indiana State, and in his first season with the programme, played in 16 games while making eight starts.

The following season was cut short due to COVID-19, but in nine games he hit .231 with six hits, one double and a triple, scored three runs and drove in one run.