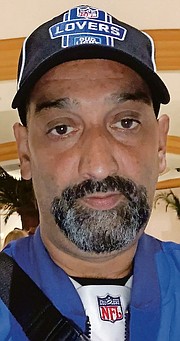 THE Bahamas’ very own Michael Strachan, the talented rookie wide receiver with the Indianapolis Colts, is making waves and turning heads in Colts training camp.

Strachan, who was drafted in the seventh round in April, is poised to have a breakout training camp.

In fact, if you hear what Colts scouts had to say in terms of what intrigued them about Strachan during the pre-draft process, you’ll buy into the hype.

Colts head of scouting Chad Henry had this to say about Strachan after his pro day :

“He blows up the testing, and then they go to run routes and it was clear that this guy has been busting his butt. He put on a show. He said: ‘I can do more than just run streaks. The D-II guy who goes to the Power 5 Pro Day, and he was the star. The star of the day. And there was never a doubt the entire day.”

NFL teams look for players who dominated the competition who they faced regardless of the games outcome. Strachan did exactly that over the 2018 and 2019 seasons for Charleston, racking up 2,326 receiving yards and 27 touchdowns. Strachan has all the measurables at 6-foot-5, 226-pounds.

It’s obvious why Indianapolis decided to draft Strachan … who seems to be establishing a nice rapport with newly acquired QB Carson Wentz by the way.

Strachan, like with all rookies, will have his ups and downs and there is always a huge learning curve.

However, Henry recently admitted to reporters that if Strachan can refine his route-running and develop a quick understanding of the playbook and how to read defences, he could threaten for the final wide receiver spot, with a chance to ascend even higher on the depth chart.

Not too bad for a seventh-round pick out of tiny Charleston, via the Bahamas.