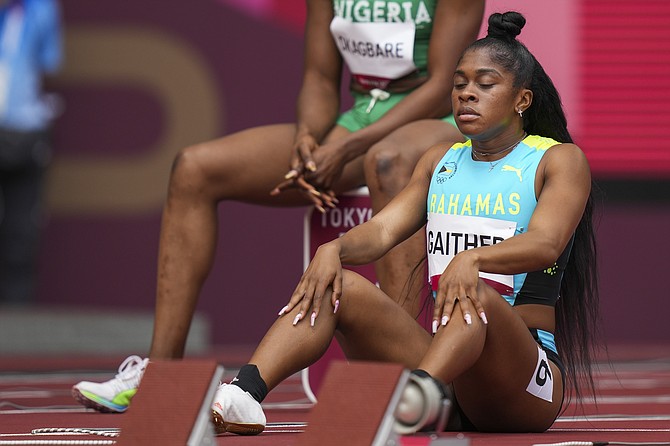 As the track and field competition got started for Team Bahamas at the 2020 Olympic Games in Tokyo, Japan on Saturday, Grand Bahamian sprinter Tynia Gaither was the first to advance to the semi-finals.

Competing in the women’s 100 metres on day one, Gaither emerged out of the sixth of the seven heats in third place in 11.34.

Before being suspended because of a doping violation, Nigeria’s Blessing Okagbare won the heat in 11.05 with Great Britain’s Asha Philip taking third in 11.31.

The 28-year-old Gaither, who is hoping to improve on her Olympic debut in 2016 in Rio de Janeiro, Brazil where she didn’t get out of the first round of the 100m, but reached the semi-final of the 200m, will now prepare for the semi-finals on Saturday at 6:15 am when she will come out in lane three in the last of three heats.

The University of Southern California graduate will need to be among the top two finishers in three heats or secure one of the two next fastest times in order to book her ticket to the final, scheduled for Saturday at 8:50am.

Missing from the field will be Okagbare, who failed a drug test. The 2008 Olympics long jump silver medalist was provisionally suspended after testing positive for human growth hormone before the Tokyo Olympics, the Athletics Integrity Unit said in a statement.

Among those in the semis are the Jamaican trio of Shelly-Ann Fraser-Prayer, Elaine Thompson-Herah and Shericka Jackson, along with Ivory Coast’s Marie-Josee Ta Lou, Great Britain’s Dana Asher Smith and American Teahna Daniels, who are all expected to provide some fireworks.