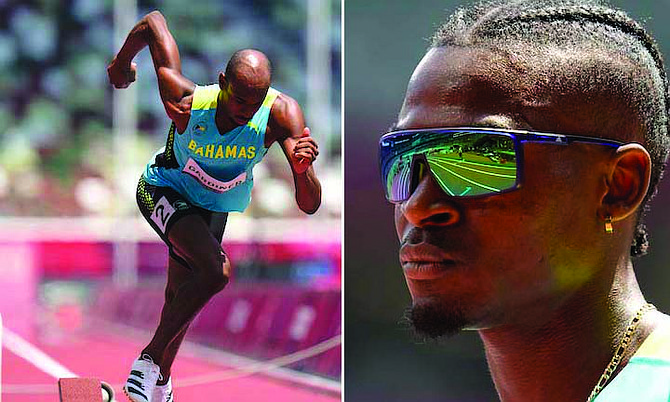 IT was an easy run for national record holder Steven Gardiner of Abaco, but a gallant comeback for Grand Bahamian Alonzo Russell as the two Bahamians advanced out of the heats of the men’s 400 metres on Sunday morning at the 2020 Olympic Games.

In the scorching heat in Tokyo, Japan, Gardiner, in his bid to add his first Olympic medal in his second appearance, was unchallenged running out of lane two in heat five. He took one glance at Trinidad & Tobago’s Deon Lendore midway on the home stretch before he coasted to victory in 45.05 seconds for the victory and the seventh fastest time overall.

Lendore finished second in 45.14 and was followed by Netherlands’ Jochem Dobber in 45.54 for the three automatic spots.

As he got the ball rolling for the Bahamas, Russell came through in fifth place in a season’s best of 45.51. He had to wait until the seven heats were completed to join Gardiner in Monday’s semi-final with the last of the seven fastest losers spot, although he was 21st overall, beating out two automatic qualifiers.

The top qualifier was American Michael Cherry, who won the third heat in 44.82. Four other competitors also dipped under the 45-second barrier to advance, while Grenada’s two-time Olympic medalist Kirani James and world record holder and Olympic champion Wayde van Niekirk trailed Gardiner on the list as the eighth and 12 qualifiers respectively.

The 25-year-old Gardiner, who won gold at the 2019 World Championships with a national record performance of 43.48 in Doha, Qatar, came into the games with a season’s best of 44.47 as the top ranked competitor in the world.

Also in his second Olympic appearance, the 29-year-old Russell had to storm back on the home stretch to get into the mix coming into the finish line. But he didn’t have enough real estate left to catch the top contenders.

Botswana’s Isaac Makwala pulled off the win in 44.86 for the second fastest qualifying time with James, the 2012 Olympic champion and 2016 Olympic silver medalist, coming second in 45.09. Belgium’s Jonathan Sacoor was third in 45.41 and Jamaica’s Demish Gay got fourth in 45.49.

The lane assignments for the three heats of the semis were not completed. The final is set for Thursday.