Passengers Hurt After Ferry Ran Aground 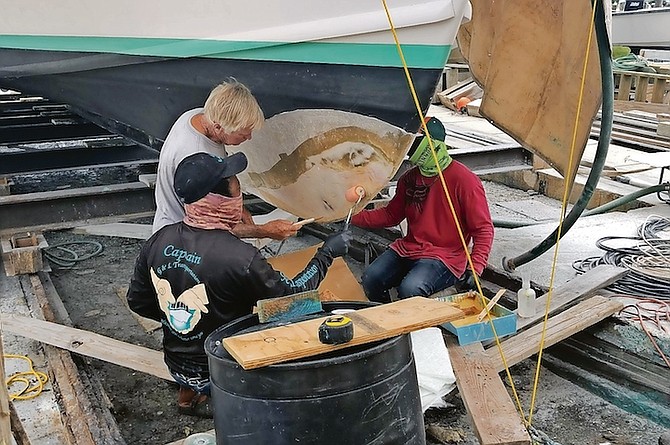 REPAIRS under way on the vessel yesterday.

The boat at dock.

MORE than a dozen passengers received minor injuries when a ferry boat they were on ran aground in waters near Man-O-War Cay, Abaco, on Sunday evening.

The 43ft vessel, operated by G&L Ferry, left Guana Cay around 9pm with 14 passengers, including one child, on board.

According to police reports, Abaco Police received reports of a boating accident shortly after 9pm in the area of Matt Lowe Cay, near Man-O-War Cay.

When police arrived at the scene, they spoke with the captain of the vessel. He told officers that the boat ran onto some rocks and that the passengers were thrown forward to the bow.

Mr Grant Albury, co-owner of G&L Ferry, told The Tribune this is their first boating accident since they started the ferry operations nine years ago.

He said the vessel sustained some damage and is under repair.

“We have it hauled out and repairs have begun, Mr Albury said. The engines are fine, and some of the running gear has to be repaired. It’s a lot of fibreglass work, but repairs are well underway.”

According to Mr Albury, the vessel has been in operation for about four years and has liability insurance.

When asked about conditions on Sunday, he said: “It was a very dark night, and the captain, I guess, lost his bearings on where he was going and ran aground.”

Mr Albury stated that the incident occurred near Johnny Cay.

“No one was thrown overboard as per reported earlier,” he said. “A few people had sustained bumps and bruises, and all the passengers I have been able to contact had very minor injuries, and all seem to be doing okay. There was one child on board, and that child was in a carrier and is doing fine.”

G&L Ferry has been in operation since 2012. It transitioned to a full-time service operation in 2016 when the company was contracted to carry the high school students from Man-O-War, Hope Town and Guana Cay to Marsh Harbour.

Unfortunate but glad that no one was injured. However, investigators should also check to ensure that they followed procedure and did a roll call of all passengers who were thought to be onboard to ensure that they all were. Even if there were only two passengers on board it would be good to know if the captain (or office) knew their names and called them out - just in case in the future someone is thrown overboard and no-one knows who they were. Let us learn from this.