Adventure Of The Seas Set For Inaugural Voyage From Nassau 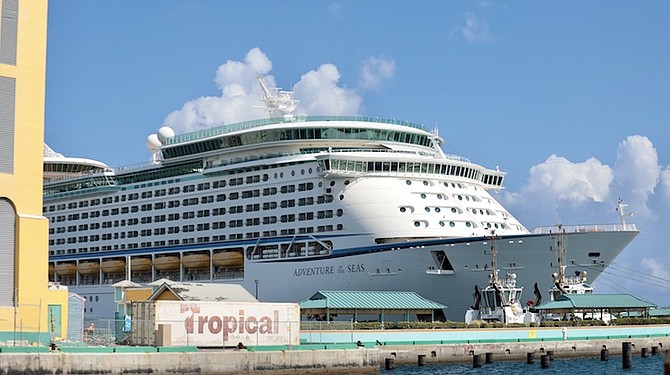 The Adventure of the Seas pictured earlier this week. Photo: Donavan McIntosh/Tribune staff

“So after 15 months of not sailing from the Americas, I am really, really happy that the ‘Adventure of the Seas’ is home porting here in Nassau and she is going to sail her inaugural voyage from Nassau tomorrow (Saturday) and we are incredibly excited to be here this weekend,” Mr Benford said on Friday.

“We have thousands of our guests who have flown in from all over the world, mostly from the United States and they are going on a seven night voyage from Nassau and a week later they will return and we’ll have another ship of cruise passengers departing from Nassau. So we are super excited.

“Once those guests actually fly into The Bahamas, mostly from the United States … a lot of folks came in days ago …. so they were booking stays in hotels so you are seeing hundreds of hotel nights that have been booked by cruise passengers which is great for the economy.”

Cruise lines ran into trouble early in the pandemic when their passengers and crew became infected with COVID-19 and sailing was brought to a screeching halt by the US Centres for Disease Control. Mr Benford said that Royal Caribbean is doing everything to ensure the safety of its passengers, crew, and the people of The Bahamas.

“We are going to start at reduced capacity,” he explained. “We are going to start at a little bit less than 50 percent. The most important thing is that we return to cruising safely. We’ve worked for many, many months on a set of protocols to make sure that we keep not only our guests safe, but most importantly we want to make sure that we keep the people in The Bahamas safe as we return to cruising. We are also changing the way some things work on board the ship.

Mr Benford said there are two types of cruises that will come to The Bahamas and both will be beneficial to the people of this country.

“There will be two types of cruises,” he explained. “Tomorrow we start with the home port ship. As it relates to the economy, one of the first conversations we had for example was with Bahamasair. So Bahamasair started to figure out how they were going to ramp up flights and fill seats on planes which was a very good thing.

“And, then once the cruisers return later in June and early in July from the United States, Nassau will be a port of call day. Folks will come in early in the morning, they will take tours. Thousands of people will be taking tours. They will be shopping, eating at local restaurants.”

Grand Bahama will not be left out. Royal Caribbean understands the plight of that island which has had its share of setbacks due to Dorian and COVID-19 and it plans to assist in putting it back on its feet.

“I think it's great, not only for Nassau but we are also going to be in Freeport, Grand Bahama as well,” Mr Benford said. “For this inaugural cruise from Nassau, we are going to spend the whole day in Freeport. We have worked for months with the taxi association. We’ve worked with the people who own resorts … people who have attractions, just to make sure they are prepared and ready to receive our guests.

“We’ve been looking for years for additional capacity to bring our cruise ships and we think Freeport, Grand Bahama is a perfect place to do that. This is not just for Royal Caribbean, but we think the cruise ship industry has a lot of opportunity for growth in Grand Bahama so we are excited to be a part of that work.”

He said over the next year Bahamians will see the start of a transformation in Grand Bahama as it relates to the cruise industry and Royal Caribbean is happy to lead that effort.

He also said how excited guests are to return to cruising.

“We feel very good about where we are and our guests are incredibly excited,” he said. “I flew in yesterday. The airport was full of people at the immigration line. There was a long line of people when I checked into the hotel. The line was wrapping around so the energy is really high.

“I heard lots of people talking that they were going on a cruise Saturday morning, so we were incredibly happy to do this and just really proud to have come back here into The Bahamas as this is the first place where we have ever sailed a cruise ship to 52 years ago. I think it’s only fitting that when we return to cruising it happens in The Bahamas.”

Not goin' take 50-years of close encounter of sailing the seas aboard a cruise ship to get to know, "What Does A Chain is As Strong As Its Weakest Set of a Rehearsed set of Protocols link goin' Mean" to the many, many months of rehearsing a set of protocols to safeguard the health of the many thousands of cruising passengers who are being lured to come aboard as willing Lab Participants at heavily discounted Sun n' Sea inaugural voyages out of the ships Temporary Home Port of Convenience (THPC) out Nassau?
I sure as hell don't remember it being the Cruise shipowners who were the ones that ordered their ships to be brought to a screeching halt and immediately return to any port that will accept them, or to just drop the anchors of the ships?
The Realm's ship registry has long been the Flag of Convenience (FOC) choice flown by many ships owned by the world's biggest shipowners..
Are we now adding, becoming a Temporary Home Port of Convenience (THPC), registry, yes?**

Ship is owned by Royal Caribbean. Passengers in isolation. No immediate plans to terminate cruise. But will ports of call allow ship in or passengers to disembark?

It's hard to believe that over 9 billion people have died so far worldwide. When will it end?

Cruise ship visit seems to be successful. Many Bahamians smiling .