DIANE PHILLIPS: There was no one quite like Sylvia Munro and now she’s gone, leaving the saving of a legacy behind

It was easy to miss the notice. Fortunately, The Tribune’s astute Eileen Carron called it to my attention, suggesting I reach out to Sylvia Munro’s son, Charles, former Bahamasair chief pilot.

CHARLES Munro with photosphere created by his grandfather JE Williamson.

I met Charles, now 63 and retired, at a family cottage on Lightbourne Lane. The cottage itself is over 100 years old and restoration is ongoing, but it is the object outside that was spellbinding. 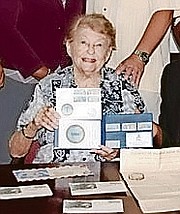 I’d always heard of The Bahamas undersea post office but to see it on land, up close, its rusting but still proud belly-shaped camera lens with the cap over the drop slot for mail on top, the thick prism glass on the front, was jaw-dropping. You know, when you get those moments when you see something you know you will never forget? It was like that.

The photosphere that served as housing for his underwater filming and in 1939 became the undersea post office was the marketing stunt of inventor and filmmaker John Ernest (known as JE) Williamson, the recently deceased Sylvia Munro’s father and Charles’ grandfather.

Williamson is best known for his early cinematography, most notably his superb version of 20,000 Leagues Under the Sea, a movie production ahead of its time. Shot in 1914, it was the industry’s first full length, hour long feature film. Its underwater set made it even more thrilling. But Williamson, the genius behind the celluloid strip, was more than a maker of movies. With a passion for everything ocean, he seemed to explode with ideas for inventions. Some called him eccentric, a nutty scientist, cranky as he aged, loud and animated, a showman commanding an audience and fulfilling its expectations. Nearly everyone called him the most alive person they knew.

Williamson brought Hollywood to The Bahamas and showed the majesty of Bahamian waters and coral reefs to the world.

Lest we paint a too-perfect picture of the original Bahamian legend of the deep, not everything that JE Williamson did would be approved today. In 1928, he led a team from the Field Museum in Chicago digging up living coral reefs in Andros to create an exhibit at the museum. They loaded their haul of Andros coral reefs onto boats bound for Florida and from there on to cargo trains to Chicago where the reefs of Andros were preserved and remain on display today.

Williamson’s justification for taking the corals was education and science, says grandson Charles, one of three children born to Williamson’s daughter Sylvia, who passed away quietly in her sleep in April at age 92, her death triggering a reawakening of interest in the Williamson impact on Bahamian history and what could be the single most valuable and underrated moveable artefact in the country.

Now it is up the grandchildren. Charles and his younger brother, Larry, both became pilots, Charles for Bahamasair and Laker Airways, Larry, now a captain with Southwest. Sister Cynthia became a teacher. Now retired, she lives in Florida. Only Charles remains in The Bahamas full-time.

Sylvia, his mom, was born during that possibly environmentally tarnished time when Williamson was working on the Chicago exhibit. Her mother was a well-known actress and both mom and daughter would star in JE Williamson’s underwater films. Sylvia’s childhood must have been the kind dreams are made of - swimming, diving, sailing, starring in her father’s films, movie reels capturing her as she swam the sea gardens off Athol Island. She was nicknamed the Little Captain.

Sylvia and her husband, Charles Munro Sr, met through sailing. As son Charles tells it: “My mother spotted the man she wanted, he ‘rescued’ her during a sailboat race in the harbour and she got him.” Though it’s hard to imagine a woman as comfortable in the sea as anyone could be needing to be rescued, she got her man. Good-looking, he, too, loved the water. Sylvia and her new husband shared that love of the sea, even if he spent a little too much time on it to lead a fully productive life, according to family lore. He was an Olympic athlete who sailed in the Star class with Durward Knowles and Godfrey Kelly in the 1960 Games. Charles Munro played around with boats, worked at his trade in accounting for RH Curry, and later operated a small shipyard called Consolidated Boatworks specializing in fibreglass and paint. A quiet man, he passed away in 1995.

Now, Charles who has buried both of his parents, has taken on the task of firing up interest in a facet of Bahamian history that can never be replicated. It’s right outside what will be his bedroom window when renovations on the historic homestead are complete.

The photosphere weighs four tons. It’s been moved three times, first onto land where the Williamsons, including Charles’ mom, Sylvia, lived on East Bay Street west of Sir Sidney Poitier Bridge and the former Pan Am building, Later, it resided at a family cottage at the eastern end of Fox Hill Creek and now, its six foot tall hulk and cylindrical body containing a series of oiled canvas coated steel rings, sits hidden among the trees in bird’s eye view of the Harbour Bay Shopping Centre on a narrow lane of Bahamian style cottages.

The Smithsonian wanted that beast of history for its collection but Prime Minister Lynden Pindling understood its value and refused to allow it to leave the country. Perhaps he envisioned it in front of what was going to become the National Museum, Collins House.

Truly one of the nation’s most historic artefacts, the officially homeless photosphere is not unappreciated by the grandson of the genius who refined an invention his own father had initially developed and used to expose the rare beauty of a Bahamas teeming with life under the sea. Coral reefs were alive back then. Even Bahamian currency was decorated with the vivid hues of marine resources, a sight that would be hard to find today.

In August, 2014, on the 75th anniversary of the undersea post office, Sylvia Munro, who never lost her love of the sea or her goal to keep the legacy alive, was honoured during the unveiling of the Bahamian stamp celebrating her father’s novel underwater attraction.

Eileen Carron adds to the memories of JE Williamson, the man we have failed to celebrate and to his daughter, Sylvia, who spent the last 20 years of her life bringing recognition to her father’s.

“I remember the last day I saw him,” says Mrs. Carron. “He was a frequent visitor to The Tribune, where he was always bristling with new ideas, blue eyes sparkling with excitement over his future plans. I vividly recall that last day. As usual he was full of plans for his post office. However, he was tired, and asked if I would give him a lift home. At that time they had left the Eastern parade and lived a little farther down Bay Street. I took him home. It was the last time I saw him. He took to his bed and died shortly afterwards.

“He was a most exciting human being, full of wonderful plans, a face that age had not creased, blue eyes and an infectious smile. I wonder what invention he told God about when he arrived at the Pearly Gates!”

Goodbye Little Captain. May you find peace in heaven and may we find a home for the historic treasure your father perfected and your son is protecting before the elements or natural disaster steal yet another piece of a unique heritage.

Nice article I guess... I would like to recognize wonderful Sylvia Munro whose Nursery School so many of us attended. What a lovely lady. She will be remembered fondly by those of us “ little folks” who knew her. God bless.