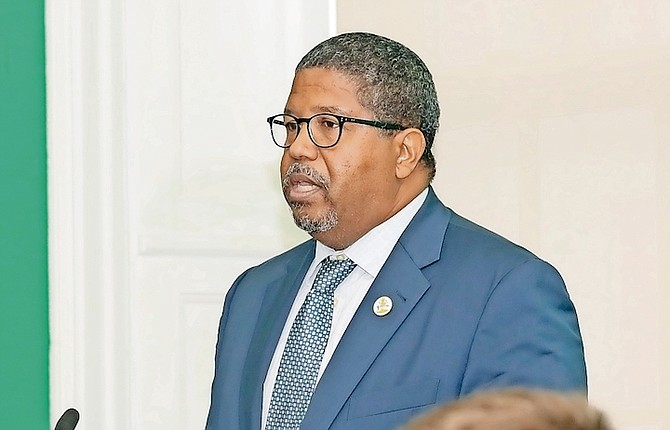 The East Grand Bahama MP said the Access to Affordable Homes (Amendment) Bill, 2021 would create concessions for one group of people to the “ultimate exclusion” of others who have equal barriers to homeownership. He urged the government to reconsider the initiative.

“This bill is extremely worrisome to me as it is inherently discriminatory on many fronts, though well intentioned,” Mr Turnquest said during the budget debate in the House of Assembly yesterday.

“Every citizen of The Bahamas is an equal taxpayer and has an inalienable right to enjoy equal benefits provided by the state. This bill, however, seeks to carve out benefits for a specific group to the ultimate exclusion of other groups equally as disenfranchised when it comes to the affordability of land and construction.

“Leaving the fact that the bill is Nassau-centric in its design, the bill proposes to use taxpayer money to grant concessions to one group over another. I’m not sure how we make up the revenue foregone, but what if a young professional is unlucky in receiving one of these lots? Why should they be penalised in the compounding of insult to injury of having to pay full price for their own lots as well as full customs duty for the construction of a home, as well as property taxes, while across the fence their friend and neighbour is fully exempted? Why should I or you be held to a different standard in equal circumstances?

“Again, I get the laudable intent but in my mind this bill goes against the principle of fairness and equal treatment under the law and invites a court challenge. I recommend finding another way.”

Earlier this year, Dr Minnis revealed a planned housing programme geared towards young professionals will include certain exemptions such as waived customs duty on building materials and appliances and real property tax exemption for up to two years after the homes have been constructed.

The proposed development in western New Providence will allow people between the ages of 18 and 45 to buy lots for about $50,000. However, the lots will be worth $150,000 once the necessary infrastructure is installed.

Yesterday, Mr Turnquest also urged the Minnis administration to make “hard decisions” regarding the viability of state-owned enterprises which have been a “drain” on the central government’s resources.

“We just cannot continue to support these entities with taxpayer dollars and make believe that they will not cause a ballooning in the national debt that will eventually come crashing down around our feet,” Mr Turnquest said.

“The current models are not sustainable and must be fixed sooner rather than later. Overall, the planned increase in expenditure of $252m must be managed extremely carefully and a tight rein kept to ensure these expenditures do not get too far ahead of planned revenue otherwise a serious cash flow crisis can develop requiring emergency borrowing, which will not be optimal.”

Speaking on the City of Nassau Revitalization (Amendment) Bill, 2021, Mr Turnquest said the current legislation has yet to produce a tangible solution for revamping Bay Street, particularly east of East Street.

“I remind us of the definition of insanity. Truthfully, without an incentive and a concession tied to an action, nothing will happen seemingly and these properties will be passed from generation to generation in their current condition.

“I propose for consideration a carrot and stick approach. Grant the extension of the concessions for one year, two years max if you feel pressed. . .and if development happens extend it for the full five years on application. If it does not happen in a year or two, the concession should fall away and the full tax become due retroactive to July 1, 2021.

“With New Providence responsible for approximately 85 percent of GDP today, how do we continue to afford to give these concessions without economic activity to compensate for it?”

He also lamented the pace of restoration efforts in his constituency post- Hurricane Dorian, a point he has raised in the House of Assembly before.

“I remain disappointed that the DRA has not followed through on its commitment to provide temporary dome homes to residents in the affected area in need of accom- modation. I understand the challenges but when one considers the costs allocated to continued debris management, to administration of the programme, the cost to erect and provide 40 resident families with some accommodation is insignificant. I do not accept the present situation and regret that I am forced to mention it again.”

He called for the removal of derelict vehicles and also said no attention has been paid to the dock at Sweeting’s Cay or Water Cay, adding he has been “begging” for a replacement seawall in High Rock.

Mr Turnquest, who is not running for re-election, ended his speech by thanking former Prime Minister Hubert Ingraham for giving him the initial opportunity to be the Free National Movement’s standard bearer in 2012.

Well, I was partial to this fella when, in opposition, he spoke on the application of VAT on top of customs duty.

I gave up on him when he I saw him on TV jeering LBT. Then he raised VAT. Then he witnessed his friend hog donated generators after the hurricane and did nothing.

He did try a little bit of fiscal austerity, but then he got booted. Yep, the long standing matters were kept in the freezer until it was time. KARMA.

But those left have gone wild with the spending.

Your time to make a difference has passed.

Right you are. He was quite content to go with the flow and keep his mouth shut on so many important matters as long as he had a good seat on the gravy train. Why he thinks his telling remarks can a difference now is beyond me too.

And, no, the housing thing is not fair. But age discrimination is allowed. You just have to peruse the newspaper to see how many age-restrictive job offers are printed.

Also there is a roving 50+ population who see themselves displaced and told they are overqualified. I have actually seen an termination letter where the employee was told she was too old, while she was in fact the most competent in her position.

The constitution does not offer age and gender discrimination protection, so the talk show callers say,

He is right. Astute comments from someone who I hope our country will not "throw away", ignore, or force into leaving the country.

Not so! He's just as wrong as Lanisha Rolle in doing what he's doing now. You just don't keep silent about things you know are fundamentally wrong while you're a cabinet member only to later wag your tongue about them once you've been removed from office.

Peter Turnquest was simply incompetent as a finance minister. A campaign general of a current senior FNM cabinet minister explained in a post the scheme he was involved.

According to polling by The Institute of Politics just released on Wednesday, June 9, has roughly two-thirds of the just now being discovered Gated Communities atheists who believe that the underlying force of evil has not yet finished with bitin' chunks out of the former contestant for the unfair evil played out on the floor of red party's convention when KP was up against Comrade Sister Loretta for deputy leader the red party. How sweet-a-bite that Comrade Karma, can be, yes?

Those of us who are not people's time voters knew that all along. Now he knows.

birdiestrachan I think there's a much bigger picture behind this situation. I think Minnis main issue is he doesn't want that particular subdivision looking like another Nassau Village or Pinewood Gardens in a next decade or two.

Must disagee with Turnquest here. This is black crab syndrome at work. So no encouragement then for students to become young Bahamian dentists, engineers, accountants, air traffic controllers? I guess not. Listen up students, just get ya D average and suck teet. That's what your entitled to as a striving studious Bahamian. Nothing. Dont waste your time. Make sure your phone got all the Regae downloaded. That's what matters in this life.

The doctor when he found out that people were against his discrimination against certain people, He said it included barbers and hairdressers some folks know better.

When he opens his real estate office he can do whatever he wishes.

You forget, prior to the PM's job, he held the position of leader of the red party opposition, and also was for years a major leaguer in the millions dollars Lessor (Agpapautang) to the governing PLP, yes?

is it justice for D graders and those who listen to Reggie music be made to pay taxes so that those who are favoured by the PM be allowed tax breaks and special upper class lots.

Then he says he is the poor from Bains town

These comments are spot on! I just find it sad that former Ministers can only find their voice after losing their lofty positions in Government. This isn’t Dr. Minnis’s first discriminatory decision. He’s been making them for a while now particularly in his role as Incompetent Authority. Time’s up! He gatta go!