Commodore: We’Re More Ready Than Ever For Hurricane Season 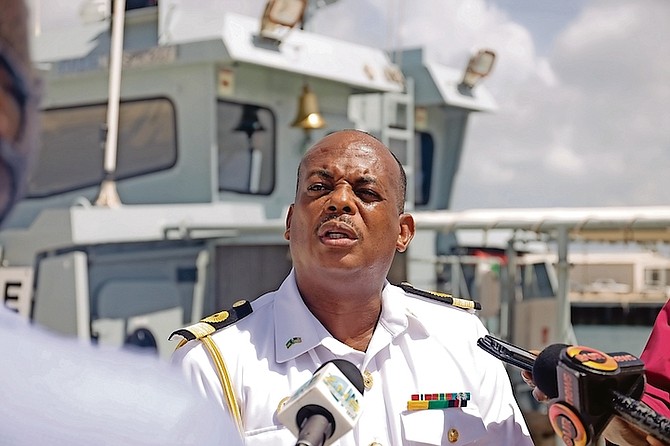 THE Royal Bahamas Defence Force, having received a quantity of new equipment, is prepared more than ever before to take on the hurricane season, according to Commodore Raymond King.

He spoke to journalists just after receiving donations from the government of the United States, valued at some $5.9 million.

“We are prepared,” Commodore King said. “On assuming office here, I established a crisis risk along with our disaster unit, which I renamed the Disaster Risk Management Unit.

“Those two units have been running training continuously prior to the season. Also we have been the recipient of a number of disaster related equipment from the United States government. I must say everything that the Defence Force asks for to prepare it, we have graciously received. In terms of training, having the necessary equipment and being able to maintain it, we are far better prepared.

“Our sister agency, the National Emergency Management Agency (NEMA), they would have been the recipient of some $3 plus million worth of equipment from the United States. Essentially, that equipment will be made available to the Defence Force because we will more than likely be the first entity on the ground to respond in terms of humanitarian assistance or disaster relief. We are far better prepared now.”

Addressing the items the US donated, he said the greatest assets for his Force are relationships.

He itemised the donated equipment and pointed out its usefulness to the operations of the RBDF.

“We have been the recipients this morning of several critical pieces of equipment,” he continued. “There are three safe boats. Those safe boats will be used in our counter drug trafficking operations particularly for the Southeast Bahamas as well as migrant smuggling that is going on in the Northern Bahamas.

“The biometric equipment gives us an opportunity to validate persons who we interact with to determine if they are flagged, if they are wanted and if they have a criminal background. It helps us to determine who we should detain for a further (interview). The other aspect of it has to do with analysing the information on the person’s cell phone. So whenever persons are arrested, we will be able to go into that equipment to see who the organised persons are in the background.”

Meanwhile, when asked about vaccine hesitancy on the Force, he said: “In terms of any potential of perceived hesitancy, there has been a softening. We had an uptick in a number of members who would have prevented themselves to be vaccinated. We are waiting now on word from Dr Dahl-Regis and her team to come on board HMBS Coral Harbour, to hold a series of meetings and forums with the various ranks to hear what their concerns are and to try address those concerns.

“Then we are going to set up here at Coral Harbour again as a vaccination centre. It’s regrettable that we are not going to be able to trace the uniform branches and classify them as an entity. The vaccine database is simply uniform branches. We have seen a significant uptick in members going forward to be vaccinated.”

Sometime in mid-May, the Royal Bahamas Defence Force confirmed that its vessel the HMBS Lawrence Major sustained “structural damage” when another motor vessel collided with it in Suriname. Lawrence Major was there for repairs at the time.

Commodore King said this boat is now enroute to the Bahamas and the matter is now being handled by the Attorney General’s Office.

Although the matter seems to be under control, Commodore King had his concerns. “My concern as the commander of this Defence Force is that the extent of damage is not readily seen to the naked eye,” he noted. “What may happen years from now? It might be something as simple as a hairline crack. Once the ship gets under operating conditions, this may manifest.

“We should still maintain some obligation from Tropical if some defect comes evident years from now. The legal teams made a proposal and it’s at the AG’s Office now.”

... the last time these dimwits said something like this we had Dorian and it did not turn out too good! Bravado is not a substitute for competence!

They learn nothing from successive storms, Andrew, Floyd,Francis, Jean, Wilma, Sandy, Irma,Matthew, for the simple reason of zero continuity of the Civil servants having to deal with these storms as they occur. To say nothing of the switching Political leadership we suffer. Each administration has nothing to go on from prior admins, and initiate their own fiascos and confusions. The NEMA act says what powers they have, but they still don'thave an operations manual! (otherwise called a field manual) They also refuse to listen to those who do know what to do, often interfering with efforts that work and work fast. And it will happen again, with Government as always, unprepared.

For Commodore King to be able to say "We’re more ready than ever for hurricane season" means he has either yet to be told or simply refuses to accept that our country is now for all intents and purposes bankrupt. Like most Bahamians, it's best he do a whole lot more praying between now and the end of hurricane season.

in other words, you are not ready.

How can they be 'more ready' when they only have about half of the original fleet in operation? And... one of them is the landing craft that is/was a great vessel for moving equipment to a site.

Its kind of funny with every press conference they have at the base 9 out of 10 of those big patrol boats are sitting there in the port.

Sounds like they are ready to stop drug smugglers in the event of a Hurricane. Good Job and definitely the number one concern for all. I am more ready for the Olympics than ever before. Still fat and out of shape but more ready than ever.