A Comic's View: Lots Of Talk But Little Action When It Comes To Citizenship 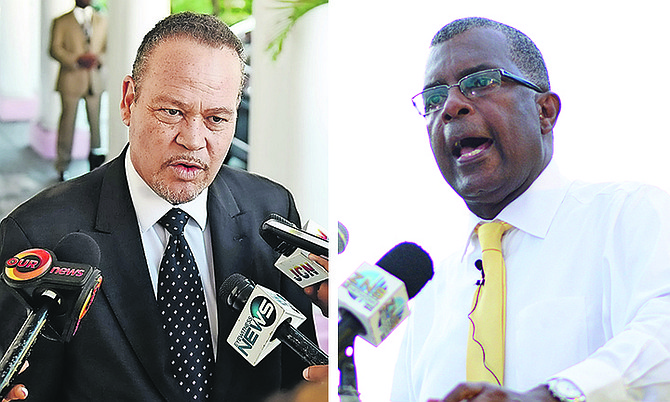 THIS week, I watched something that I usually (aggressively) try to avoid; the televised Senate proceedings.

My aversion to Senate debates stems solely from the fact that the “upper chamber” is quite boring.

Actually, compared to the ‘Bam! Bam! Bam!’ business of the House, the Senate still needs a few fistfights, a ripe slap, and a cuss word or two (looking at you, Brave) to reach boring status.

Alas, as far as entertainment goes, watching senators argue is like watching ink dry on a very big, very wet rubber stamp. Which, ironically, is what happens there.

Yesterday, though, faced with the House on hiatus for half of the rest of the year (no, seriously), I grudgingly tuned in to the Senate.

Lo and behold, imagine my surprise at witnessing sworn enemies – senators Carl Bethel and Fred Mitchell – agree on, well, anything. (That’s one of the signs of the apocalypse, right?)

Attorney-General Bethel and Mr. Mitchell found an issue they united around; our own Court of Appeal’s recent decision around citizenship. They both want an appeal to the Privy Council in London.

Who knew all it took to end their bitter blood feud was the idea of having ten British lords and two British ladies (sipping tea more than 6,000 miles away) tell Bahamians who is and isn’t a Bahamian?

I grabbed a cuppa myself and glued my eyes to the screen. Their friendly-ish exchange was indeed a thing to behold:

Yes, they agreed, the AG Office needs to get a stay and appeal our Appeal Court’s decision.

Sure, they opined, judicial rulings are fair game for fierce, political criticism. Because, after all, no law is above the law!

And just when I thought they would join hands and sing ‘Kum Ba Ya,’ their fragile alliance fell apart.

Mitchell insisted that when it comes to judicial decisions, the jurisdiction ‘resides with the judge,’ meaning a judge in our system can make a decision on a case before our courts from anywhere in the world.

Bethel found this ludicrous, asserting, “The Court of Appeal resides in The Bahamas.”

Mitchell was back on his feet, saying jurisdiction –- like a bad case of gas – travels within the person of a judge, who can let loose anytime, anywhere.

And with that, Bethel and Mitchell were back to bickering.

More interesting than their short détente was what they did not say. But reading between the lines, it seems that neither the government nor the opposition is prepared to address the citizenship and immigration issues plaguing our country.

In 2017, Prime Minister Dr Hubert Minnis promised sweeping amendments to the Immigration Act, which should have addressed some of these issues before our courts.

On November 6, 2017, The Tribune reported on how Carl Bethel himself said that “the Minnis administration will not just grant automatic citizenship to children of Bahamian women born abroad upon application, but to children of unwed Bahamian men as well”.

By 2018, not much got done, and Doc joked, “We’ve only been in one year and a half, you know. You want me undo everything in one year and half? We still have seven and (a) half more years to go.”

Bethel’s promise to put the two disenfranchised groups on “broadly equal footing” was prescient, in that governments’ consistent failure to get any legislation passed means neither group had a leg to stand on.

Until the Appeals Court took a position this week.

Now our AG is alarmed and arguing against what he was arguing for just three short years ago.

To up the political ante, the AG also made a dodgy claim that millions of people supposedly stormed government offices like Gollums searching for “precious” voter’s cards. In the two days since that ruling!

Not passports, mind you, but voters cards!

If you’re expecting Fred Mitchell and the Progressive Liberal Party to do anything differently, think again.

Mitchell wants to keep the status quo. In other words, go beg your minister like you’ve always done.

In 2018, Senator Mitchell said, “the Bahamas Nationality Act gives the minister the power to give citizenship to any child. So there is no need to do anything other than improve the administrative procedures.”

Note how the two major parties may disagree, but on immigration, they don’t really disagree.

There is a reason these two rivals agree on bringing the Privy Council into this mess of our making. The plan was always to talk a lot, but do very little. Citizenship and immigration are mere talking points.

But now, the Appeals Court has spoken, upsetting the apple cart.

So, all that is left to do is wait and see which way the wind breaks across the pond.