DIANE PHILLIPS: A Rose that will always bloom 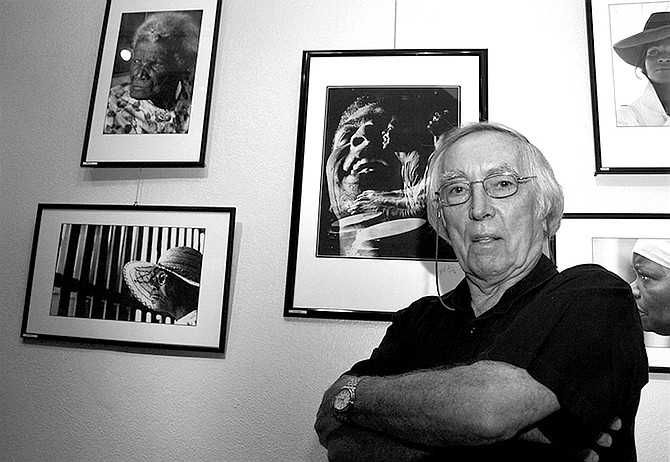 Roland Rose with Peanuts Taylor at the Central Bank Gallery, in the exhibit A Rose and a Fleur: Motion & Emotion, open from January–March 2008. Photo: Eric Rose

THERE are photographers and then there was Roland Rose.

Other photographers gave him his title, the Dean of Bahamian photography. Some called him the Master. When he passed away on June 16 at the age of 84 from cancer and a note went out from friend and fellow photographer Linda Huber, more than a few tears flew back and forth across a circle of photographers who knew that even at their very best, it would be hard, if not impossible to do what Roland Rose did.

He aimed a lens and captured a world.

In vivid colour for nature and black and white for emotion, Rose seized moments and froze them, preserving them for the day he would no longer be here to record them. Peanuts Taylor beating a drum so powerfully you could see it in slow motion, building momentum, then a crescendo. You could feel the wind and water whipping from an approaching storm surge barreling down on a small vessel, the pulsing gyrations of a Junkanooer.

Rose created images so alive they told a story without words, vibrating with energy or quieted by stillness. And yet from this same man came a gentle body of work of the flora and fauna of The Bahamas unmatched by anyone who followed. The soft sand of a beach so lifelike you can feel the warm grains slip through your fingers. Flamingoes marching. A two-toed sloth making its way up a tree. The sun’s waning rays casting a shadow on a beached dinghy. Yellow elder in bloom or his favourite, the deep magenta bougainvillea that he often used to frame a subject when just a touch of colour turned image into art.

Nothing was beyond Rose’s camera reach. From portraiture to breaking news, Rose was agile, antsy, ready and a perfectionist who demanded from others the same standards he applied to himself. But there was one incident he could not master, a tragedy that haunted him to his dying day – the burning of his official photography of The Bahamas Independence ceremony at Clifford Park in July 1973, the exploding with pride moment when the flag of Great Britain was lowered and the Bahamian flag raised. Negatives and photos were accidentally thrown into a fire during a clean-up at the Bahamas News Bureau. 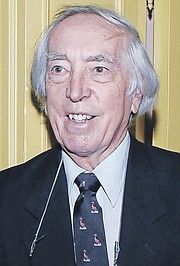 Two years before that in 1971 and at the same Bahamas News Bureau, Rose met a young and eager photographer named Wendell Cleare who at 21 had just walked into his first job. It would be the start of a lifelong friendship between the photographers.

Cleare was among those shaken by the loss of the Master. He shared these thoughts: “As a young photographer, Roland treated me as a little brother. He trained me and gave me directions in the dark room and on the field. He was always willing to teach me. He was always willing to show me and assist me with any request I had. He was special to me; not only in the photography world but in life itself.”

Linda Huber (Flowers of The Bahamas, Nassau’s Historic Landmarks) also praised Rose for his willingness to share, never hesitating to demonstrate the best angle, what aperture to use, judging light, speed.

Rose was so Bahamian it was hard to think of him as anything but. In fact, he came to this country at the age of eight or nine from Italy when his father accepted a job as head of groundskeeping and landscape for the owner of what was then Hogg Island, now Paradise Island. Taking pictures of what became such a passion that by the time he was 13, he traded in his most prized possession, a harmonica, for a camera.

As a teenager, he joined the Bahamas Development Board, the precursor of what is now the Ministry of Tourism, and for the next nearly seven decades chronicled the highs and lows and special moments of Bahamian life. With his wife, Barbara, and two children, he travelled the world and though he grew up in a developing island nation, was always eager to experience something larger, newer, different and every photographer who knew, or all but worshipped the work he produced, marvelled at how quickly he adapted to digital and how proficient he became at using technology to enhance images effectively.

Says Derek Smith, another of the greats with a camera: “Roland was a true professional. I met him in the early 70s at the Camera Club of The Bahamas, that’s when the professional photographer taught the budding photographers how to take good photographs and he became my mentor. Roland always kept up with the times with his camera equipment, he always had the best. He used Canon equipment and I do, too. I recall in 1993 at a Photographic Exhibition held by six professional photographers at the Central Bank, he pulled me to the side and said ‘You remind me of me the way you take photographs’.”

To Smith, that was the greatest compliment of all, for the Dean of Bahamian Photography to say he resembled him in style.

In recent years, Rose’s work appeared on The Tribune’s most colourful page, Through a Rose Coloured Lens, which ran every Friday in the Weekend section.

In our office, we worked with Roland Rose over the years on wide-ranging assignments from the gardens, animals and birds at Ardastra to official ribbon-cuttings. In 2008, I helped arrange and coordinate a photography exhibit at Central Bank showcasing the work of Fleur Melvill-Gardner and Roland Rose, both now deceased. It was called ‘A Rose and a Fleur: Motion & Emotion’ and many of the images that circulated upon news of his death came from that show. It was the least I could do for someone who, every Christmas, remembered us at DP&A bringing us a large, framed Roland Rose photograph. They decorate nearly every wall. I gaze at a b&w of a closet with discarded choir robes, a few drums and a tear rolls down one cheek, Wendell Cleare, you were right when you said: “The photography world in The Bahamas was blessed to have Roland and you will be sorely missed. I love you, Roland.”

We all do. We always will.