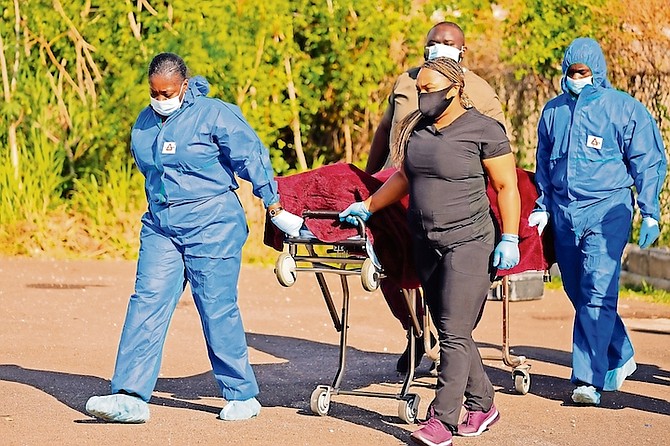 The body is removed from the scene. Photo: Donavan McIntosh

Head of the Criminal Investigations Department, Chief Superintendent Shanta Knowles said shortly after 7am police received reports that an unresponsive male was found in the community just off Pine Barren Road.

“Officers and medical personnel responded to this location (and) discovered the male who had injuries to the body and later he was pronounced deceased,” she said.

Asked if there was anything to suggest if the individual was homeless, she said: “We don’t want to say that he’s a vagrant. We believe that he lives in this community and so that’s the reason for us having our officers on the ground so that we can possibly find relatives who can eventually make a positive identification.”

Police suspect the body may have been in the area overnight. The deceased appeared to be about 50 to 55-years-old.

This comes after a spate of murders last week.

A single mother was fatally shot in the Coconut Grove area on Friday night a day after her uncle was killed at the same address.

A close relative has identified the deceased woman as 26-year-old Shavonna Adderley. Her uncle was identified as Gladstone Francis Jr. They were two of four people shot in two separate incidents outside the same home.

Earlier on Thursday, around 4pm, a man was killed and a woman was injured at a shooting on Peardale Road.

Police are appealing to members of the public who may have information that can assist with the investigations into these homicides or any other crime to contact the Criminal Investigations Department at 502-9991/2, Crime Stoppers at 328-TIPS (8477) or the nearest police station.

Psychologists say that ‘for every 1% increase in the misery level, there can be at least a 13% increase in crime and violence. And The Bahamas is attesting to that. The deadly shootings over the past several weeks is simply intolerable. And the fear and uncertainty of the future and the anger of losing loved ones, jobs and other assets and freedoms leads to a feeling of hopelessness and helplessness. Government must now push a message of help and hope. Not further divide the country or send messages of forcing people, who are already in fear and distrust, to take vaccines.