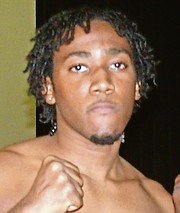 LESTER Brown Jr’s return to the ring ended in disappointment against a highly touted amateur prospect in his professional debut.

Keyshawn Davis, of the United States, stopped Brown in round two of their scheduled four-round lightweight bout Saturday night at the Hard Rock Casino in Miami, Florida.

In round two, Davis scored the only knockdown of the fight with a right hand to the head that sent Brown to the canvas.

Later in the round, Davis backed Brown into a corner and delivered several shots that prompted the referee to step in at the 2:50 mark.

“I did enough but I didn’t feel like I showed all my talents at all.

“My opponents will bring the best out of me and I still got a lot more to show,” Davis said.

“I was kind of upset that they stopped the fight in the second round, I felt like the kid had a lot more to go, but he was hurt so I appreciate and respect the stoppage.”

Davis came into his pro debut as one of America’s most star-studded amateur fighters with a record of 76-12.

The 22-year-old was considered a frontrunner for the country’s medal hopes at the Tokyo Olympics.

He was scheduled to fight American Jesus Vasquez Jr last August but COVID-19 restrictions forced the bout to be postponed.

His last match was a December 2019 third round loss via TKO to Cuban Manuel Correa in Miami, Florida, for the ABF super featherweight title.

His 2019 campaign also included his last win, an unanimous decision over Alvin Brown on March 6 in Fort Walton Beach, Florida.

He followed with a draw against Quantae Mitchell on April 19, a loss to Abel Aparicio on July 6 and a draw to Roderick Gilkey on October 5.

Saturday night’s match was on the undercard of the Canelo Alvarez versus Avni Yildirim fight.

Alvarez scored a third round TKO.