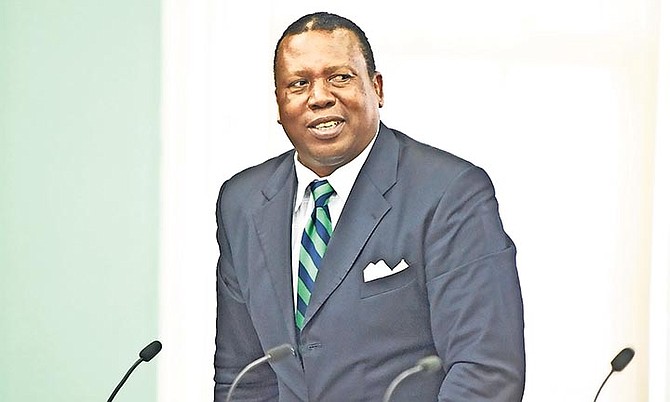 MANGROVE Cay and South and Central Andros MP Picewell Forbes announced in the House of Assembly on Monday morning that he is not running for re-election.

“Today I stand to take my last political breath, my name would never rise again in political cycles,” he said in a shock announcement. “My work is done politically.”

He said the communities of his constituency are better off today than they were when he first represented the area 13 years ago and had a message for his detractors.

“To my detractors. . . I did not get everything right, there was some missteps. I am not a slave of fear but I am an imperfect child of God.”

He also said: “I will not be offering in the 2022 general election but to those in my constituency who are concerned, I am okay. God has taken care of everything and will continue to do so.”

It had been anticipated that Mr Forbes would secure a nomination for the next general election along with other Progressive Liberal Party incumbents.

In November 2020, PLP Leader Philip “Brave” Davis said only something egregious would prevent incumbent PLP parliamentarians from being ratified as candidates in the next general election.

He made the comment as he suggested it was unlikely that Monique Pindling, the daughter of former Prime Minister Sir Lynden Pindling, would be successful in her bid to replace Mr Forbes as the party’s nominee in the South Andros constituency.

More on this story as it develops.

Poor Picewell was no doubt told to make room for Monique Pindling or all of his skeletons in the PLP closet would be made public. LOL

Time to ask Fred Mitchell to "come clean" on why Forbes ain't running for reelection.

Is that you, John Travolta?

I had posted to keep all eyes stay focused south and central at constituency House-seat to suddenly out blue give way by February's-end - Monique P. Yes?

Seems like all the political parties are pulling out long daggers as the silly season goes crazy. And only a few olive branches are being extended. Truth of the matter is parties have their foot soldiers on the ground and they may be seeing and hearing what the general public does not see and hear. So the parties are cutting the suit to fit the cloth, so to speak and hey Election Day is not more than 14 moths and a few days away. And Donald Trump says he may run again too!

Election day is a few months away at very most.

I am going to vote for Zoidberg.

He was pressured or persuaded not to run for reelection. He was probably promised something in exchange for not running in this election.

That goes on in both major political parties here in the Bahamas, the FNM and PLP. Ask Halson Moultrie what position he was promised by Dr. Minnis for not being on the FNM ticket in this upcoming election.

@Bone, any old, long memories of an F.A. Dean of Wulff Road? Comrade Halson reminds me, lots him.

MP Picewell Forbes should now stand in the Honorable House and expound on all the contributions and initiatives to country and people!

It won't take too long.