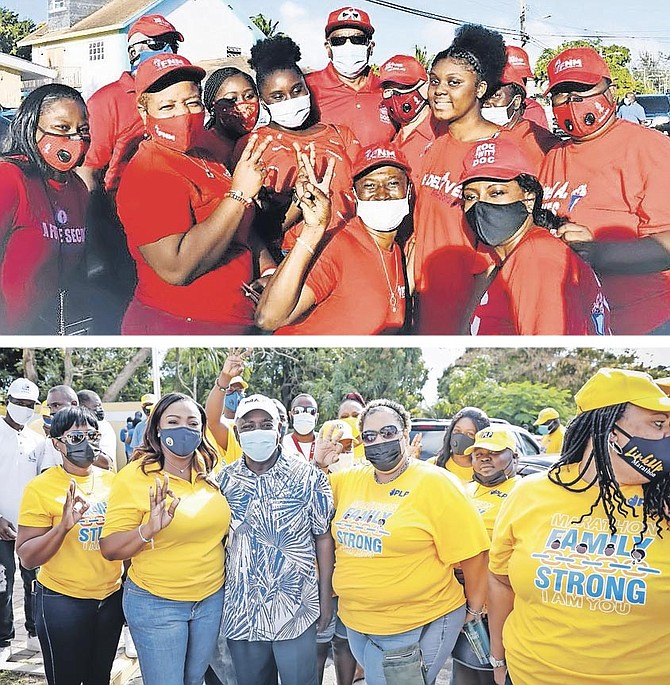 THE FNM walkabout in Golden Gates, top, and a PLP event held at the weekend, above.

DEPUTY Prime Minister Desmond Bannister said yesterday he has not seen “any evidence” of large gatherings being hosted by the Free National Movement in contravention of the COVID-19 emergency orders, saying if anyone has those types of gatherings, he’s certain “the law will take its course”.

Videos posted on social media of the group making their rounds in the area showed over a dozen people.

According to the COVID-19 Emergency Powers Orders, social gatherings are not permitted in New Providence.

When asked to address concerns about the party having large gatherings while other Bahamians are being cited for participating in such events, Mr Bannister replied: “I have not seen any evidence of gatherings over the requisite numbers and if anyone, nobody is above the law, so if anyone has those type of gathering, I’m sure the law will take its course.

“The second thing is if anybody does have them then the law should take its course. The third thing is remember what the doctors have said. We are not past the danger in this pandemic so we have to be very, very careful about that and I’m sure that the police, the authorities are listening to the medical advice and if anybody breaches the law, I’m sure they’re going to respond appropriately.”

The works minister said the same rule also applies for other political parties.

On Saturday, the Progressive Liberal Party also held an event at its headquarters where free curbside breakfast was offered.

The event was criticised by some observers after photos showed a number of people outside the headquarters.

“Our gathering was not a gathering,” Mr Davis told reporters when asked about the issue. “It was just people coming in and picking up breakfast and they ought to take the bibby out their eyes before they try to take it out of others.”

In a statement released Sunday, police said they cited 23 people for attending social gatherings over the weekend.

In the first incident, shortly after 4pm Saturday, officers acting upon information went to the parking lot of a local business located on Robinson Road.

After arrival at the scene, officers saw several people boarding a vehicle advertised as “a party bus.”

Police said: “A short time later, the bus exited the lot, the officers intercepted the vehicle and found five people on board. A field search was conducted, each person was cited for breach of COVID-19 emergency order and warned of prosecution.”

Several hours later, police cited 18 people after officers were alerted to a large party being held at Boatswain Hill.

On Sunday, police reminded Bahamians and residents that hosting social gatherings and bars is still prohibited.

Dr Minnis has also repeatedly warned about large social events, noting them to be super spreaders for COVID-19.

some not properly wearing masks yet they harass common folks, and this is clear evidbnce

Our gathering was not a gathering,” Mr Davis told reporters when asked about the issue.

That right there is the biggest joke there is. They had a gathering but it wasn't a gathering. Wow. You can't make this stupidness up.

Mr :;;Banister has a problem he lies all the time. The PM is breaking his own laws

People are allowing these politicians to turn them into suck up idiots again........big sad sigh