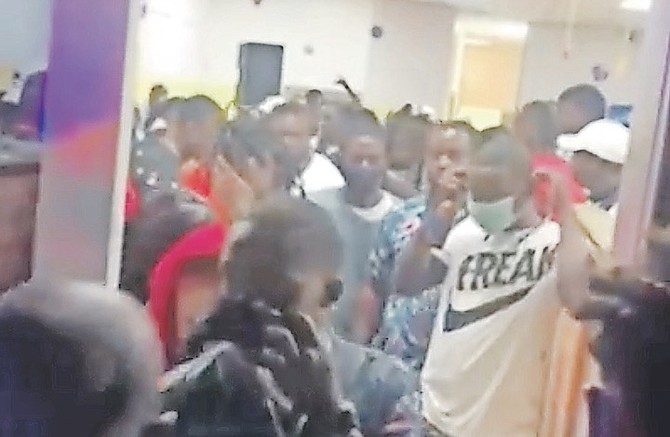 AN IMAGE taken from video showing the interior of Chubb’s Kitchen as people were filmed leaving.

THE co-owners of an Abaco lounge were ticketed $30,500 for breaching COVID-19 Emergency Powers Orders by having nearly 100 people crammed into a space only meant to hold 24.

The news of the citation was released by police after a video was circulated on social media showing dozens of people pouring out of Chubb’s Kitchen, a restaurant and lounge. The video showed men and women, many with drinks in hand, leaving the lounge while being ordered by police to put their masks on. The individuals were not practising social distancing and many either were not wearing masks or had them pulled down to their chins.

There were 95 people in the space, when it should have only had 24 persons, police said.

While the business was not named in their release, police said shortly after 9pm on Friday, February 27, Abaco officers were on mobile patrol when they saw a number of vehicles in the Central Pines area at an establishment.

“On further checks, officers observed a large crowd on the inside who were not social distancing and were not wearing face masks,” police said in a release.

“Upon further checks and (a) headcount, there were a total of 95 persons in a space that should only occupy 24 persons in total for social distancing compliance.

“As a result, both co-owners of the establishment were warned and spoken to by police in regard to the breach of the Emergency Powers COVID-19 orders. They were ticketed in the amount of $30,500.”

The island currently has an 8pm-5am curfew, which went into effect on Sunday, because it has seen a recent spike in coronavirus cases. North Abaco island administrator Terrece Bootle-Laing told The Tribune last week it is expected the curfew will reduce the number of gatherings.

“The evening hours tend to be the more high social gathering time and that is what we’ve paying attention to in terms of you know when persons begin to socialise and intermingle with each other and found persons have not been strictly adhering to because as you move in and about and you get a lot of concerns about bar room gatherings and persons not wearing masks into up to the curfew time and so we were seeing that becoming very concerned about persons letting their guards down,” she said.

I get a good chuckle when I think of all the times our supreme ruler violated his own orders and protocols with complete impunity. And I'm sure the hypocrisy of it all does not escape the attention of many, including Dr. Sands who was cut down at his knees by our supreme ruler. LOL

We see this type of costly 'example setting' enforcement by our supreme ruler's gestapo squad only occurring in those constituencies that the FNM party knows it doesn't have a chance in hell of winning in the next general election.

Each patron should have been fined as well.

Why should they be allowed to stay in business? Revoke their license

That ain't gonna happen.....the Chubb Kitchen has way too many patrons of Haitian heritage and we all know how Minnis likes to pander to them.

95 persons in a space that should only occupy 24 persons in total, none were checked for immigration compliance. The rule of laws,* has no priority on the islands, towns, and settlements of the Abaco's. Tourists openly walkabout whilst thumbing their noses from their maskless faces.
The mandatory five-day testing goes mostly ignored, whilst the two House-elected redcoats MP's, hear and see nothing. * I hope Comrade Sister Loretta, is contemplating a run for the Central & South Abaco Constituency's, House-elected seat. Yes?