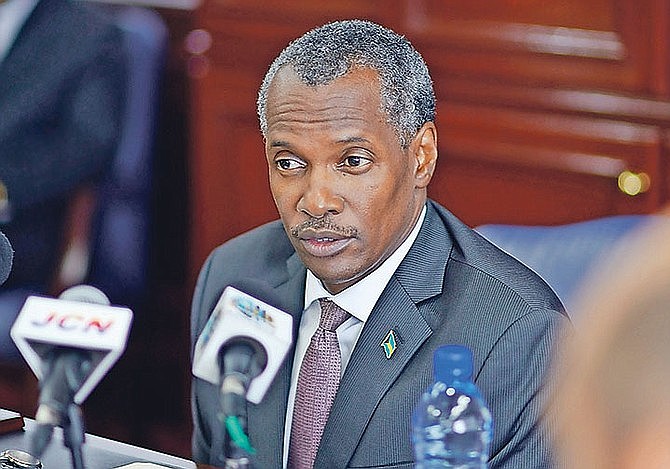 DEPUTY Prime Minister Desmond Bannister yesterday dismissed the idea of him serving as “co-Prime Minister” if the Free National Movement is re-elected to office, noting Prime Minister Dr Hubert Minnis’ recent comments on the matter were made as a kind gesture towards him.

He made the remarks when responding to questions from the media yesterday concerning Dr Minnis’ statements that he and Mr Bannister will undertake an initiative that has never been done in the country’s history.

While speaking in the House of Assembly, Dr Minnis said the two will “split” the leadership in a move that will allow him to solely focus on creating opportunities for the poor and making land more affordable for Bahamians.

He said: “The Deputy Prime Minister and I have a commitment. I said to him that ‘listen, how government is run today, we have to look at it differently – never done before,’ and what I’ve said to him in our next term [is] I want to concentrate on the poor, I want to concentrate on land, giving out to Bahamians to ensure everyone has an opportunity for land and a home.

“And, I want to concentrate on Bahamian ownership. I want to confine myself as Prime Minister in the next term just to those components and he,” Dr Minnis said, patting Mr Bannister on the shoulder, “will run the rest of the government. Let me confine myself to that. So, we’re going to split. It has never been done before, but it will be more effective, more effective especially when you have a great relationship. It’s never been done.”

Yesterday, Mr Bannister explained that there’s no such thing as a “co-Prime Minister” and noted he has no plans to serve in such capacity.

He also said he believed the Prime Minister was “just trying to be kind” to him.

Both Dr Minnis and Mr Bannister have yet to be ratified by the FNM for the next general election.

However, Mr Bannister did not express any concerns on the matter yesterday, telling reporters he has every intention to seek a nomination from the FNM to represent the Carmichael community.

“The people of Carmichael are my people and there’s no question that I am going to be applying to my party to be nominated as the candidate for Carmichael.”

Asked if he believed he might win his seat again once ratified, Mr Bannister replied: “I’m going to speak about that in the current debate and I hope that y’all listen and there’s no place in this country where you see the developments that has happened in Carmichael over the last few years.

“Even when the PM talks about these lots that some of y’all may want to live in the western Killarney, think about Carmichael because there’s more opportunity in Carmichael.”

Mr Bannister, who is good friends with Mr Forbes, said while he was shocked to hear the news, he believed the PLP MP did the honourable thing.

“I went to speak with him as a colleague and as a friend to just affirm that what he was doing in my view was absolutely the right way to do it and the right way to let his people know that he was not going to contest the election,” Mr Bannister said.

“He knows that what he did was the right thing and I think having said that, I also affirmed to him that the projects he has ongoing in South Andros which some of you will see very soon, outstanding contributions to the legacy that he’s left in Andros.

“He was not elevated in two terms that his party was in power but if you look at the leaders of his party and what they’ve done in their constituencies, none of them has done what he has done in his constituency. None of them and so he has an outstanding legacy and he will always be my friend.”

Dumbo and Dumby.....now that's what I call a real dynamic duo! LOL

Concur! Dumb and dumber, TweedleDee or Tweedledum! Which is the leeser of two weevils?? Pay your penny take your turn for the coconut .

Anyone of the male gender, should they become approached as a possible female PM-in-waiting, just might want to keep their eyes pinned to run at the very second upon spotting the unscrewing of the lid on a jar of Vaseline.
God forbid, as to the kinds of gossip be trending on the social networks street and jib corners once such prime ministerial sharing roles news was to spreads.
Just shouldn't be making such kinds of gossip news, up. Yes?

"suck teeth" at yinna. . .grow up in yinna political dialogues. . .the children section is "to the right" . . .this the "big people section"!