Reckley Listed As One Of The Top International Prospects 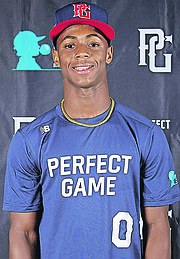 RYAN Reckley was listed by Baseball America as one of the top international prospects for the upcoming signing period and is projected to sign one of the most lucrative deals in the current class.

The publication released its first “International Big Board” for the 2021-22 International Signing Period and lists Reckley as its No.8 prospect overall.

According to BA, the San Francisco Giants are reportedly the leading candidate to sign the switch hitting shortstop to a deal worth more than $2 million.

Reckley, 16, is a product of the Maximum Development Academy (MaxD).

“If everything clicks, he could be a switch-hitting shortstop who hits at the top of a lineup, with a quick stroke that’s more efficient from the right side and geared for line drives with gap power,” BA’s Ben Adler said.

Prior to the COVID-19 pandemic bringing a halt to much activity in the sport, Reckley was named to the All-Tournament Team for the 2020 WWBA Sophomore World Championships, September 24-28 at JetBlue Park in Fort Myers, Florida.

He was also a member of Elite Squad U16 McCoy squad that finished the event 2-2 and were eliminated in the first round of the playoffs. He averaged .333 with a double, two RBI, four stolen bases and scored three runs with an .833 OPS.

Listed as 5’10” 170 pounds, he has made All-Tournament Teams at the 2019 WWBA Freshman Championships, 2019 U14 PG Series Classic, U14 BCS National Championship, WWBA U14 East Memorial Day Classic and 2018 PGBA U14 Florida Fall Nationals.

In 2019 Reckley received the opportunity to showcase his skills against the top players in his class across the United States. He was named to the roster of the Perfect Game 14u Select Baseball Festival.

The fourth edition of the event featured the top 44 prospects from the national prep classes of 2022 and 2023.

“Reckley is tightly wound with fast-twitch muscle, an element of his game that aids him on both sides of the ball,” his Perfect Game analysis said.

“He’s a switch-hitter with present bat speed from either side, whipping the barrel while showing an advanced defensive skill-set, all of which equate to a highly intriguing international sign come July 2 of 2021.”

MaxD was established in 2014 and has continued to provide an avenue for players between the ages of 11 to 17 to hone their skills with the view to achieving scholarships or pursuing professional baseball.