Insight: Delays And Frustrations But The End Of The Tunnel Is In Sight 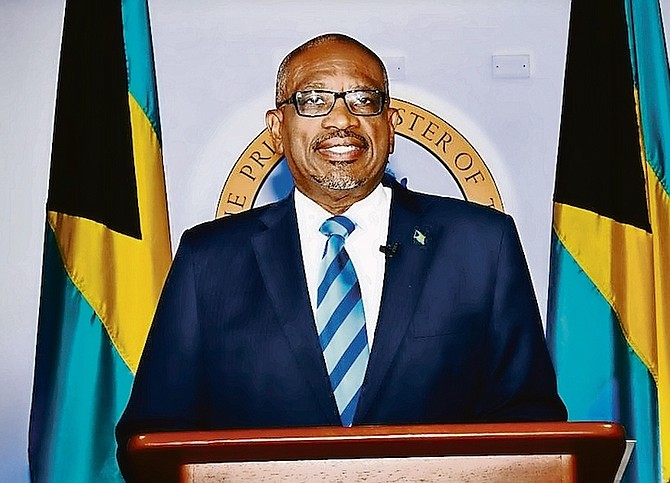 THERE was a sense of relief among Bahamians on social media when it was announced the first vaccines would arrive in the country today. When this news was followed by an update that the vaccines would be delayed until Wednesday because of “logistical issues with the airline overseas”, that relief shifted to weary cynicism.

After all, we’ve already had Health Minister Renward Wells going back and forth on his predictions of when the vaccine would arrive, even as overseas officials have said they have told countries exactly when to expect doses.

Regardless of Prime Minister Dr Hubert Minnis’ words on Sunday - and really all he left us with last night was more delays - all this leaves an understandable air of frustration in the air as Bahamians just want government to tell us like it is.

If we look past that frustration, however, it would seem there is some genuinely good news. Delayed until Wednesday or not, that first batch of vaccines will be here soon, it seems. This is a donation from the Indian government of 20,000 doses. Some doubts were being floated on social media about whether this vaccine from India was different from others or whether it was as effective, but it is the same Oxford-AstraZeneca vaccine we are due to receive 100,000 doses of through the Pan-American Health Organisation (PAHO). It’s merely made locally in India by the Serum Institute, the world’s largest vaccine manufacturer. It has the same effectiveness as the Oxford-AstraZeneca vaccines made elsewhere.

This seems to be a different donation from the vaccines coming from PAHO too. The vaccine is supposed to be taken as two doses, and if it is administered that way then that’s another 10,000 people who can receive their jabs as part of this first wave of vaccinations.

Added to the 100,000 doses promised elsewhere, that is 60,000 people that could soon have the vaccine in their arm.

That should indisputably ensure that healthcare workers can be vaccinated for a start, as well as a considerable number of those who have co-morbidities that would put them more at risk were they to catch COVID-19.

Minister Wells has suggested the government will likely use all doses at once. This was when we were expecting 100,000 doses, which would have meant 100,000 people getting the first jab.

He said: “We have always talked about the 100,000 dosage which is about 50,000 doses if you give everyone two doses, but the dose is obviously spread over a period of eight to 12 weeks for AstraZeneca. That’s when they say it’s most effective.

“So more than likely the government will vaccinate everyone first, give them their first shot of those who are wanting to be vaccinated. That could be 100,000 persons barring we don’t have any spillage or waste.”

At the time, he said that the government had approached the Serum Institute for more doses – and that would appear to be how the extra 20,000 doses have been secured.

What the government doesn’t want to happen is giving everyone the first dose and then not having the second dose to follow it up. Mr Wells said that would not be the case, and that “we can assure the Bahamian people we will have additional vaccines”.

That might be the case, but Mr Wells has also assured people that the first vaccines would have arrived last week – and that turned out to be incorrect.

Still, as we inch closer to the first vaccines actually arriving, we also hope that the plan for the rollout goes without a hitch.

There is perhaps no more important task facing our nation than the effective delivery of these vaccines right now.

We have logistical challenges, we know that. The Bahamas is a chain of islands. The majority of the population might be centred in New Providence and Grand Bahama but a significant portion of our people are on various Family Islands and distributing the vaccine to those residents is where the greatest difficulty will come.

Thankfully, the vaccine we have available does not need the super-cool freezers to keep it effective, but it will still need to be transported securely and in the right conditions not just to different islands, but to sometimes quite remote parts of those islands.

The COVID statistics issued by the government each day have shown spikes in places such as Abaco, so do we blitz an island experiencing such a spike to try to kill off the virus there, or do we start in islands that haven’t experienced it as much yet to try to keep it from securing a foothold at all?

There are a lot of decisions to be made, none of them easy, and all of them which can only be made easier by increasing the supply.

After that, there is the need to convince people to take the vaccine. With the state of the nation and all that we have gone through, you wouldn’t think this would be too hard, but there are still people who claim it is all a hoax and who listen to self-proclaimed experts who post on their Facebook wall rather than genuine experts whose qualifications hang on their real walls.

Sadly, misfires such as the delays in arrival of the vaccine tend to encourage doubts rather than reassure people of the truthfulness of those experts they ought to be listening to rather than the conspiracy theorists who point to such problems in the rollout and say they told you so.

What is most encouraging is that where the vaccine has been rolled out, there have already been signs of a reduction in infections. That’s what we all want. No more family members in the hospital, no more friend and colleagues at risk and no more having to deal with a shutdown economy that cannot restart properly.

The vaccines might not have arrived today. They might not arrive tomorrow, or Wednesday. When they do arrive, however, will be the first day we can truly see the light at the end of the tunnel.

The light at the end of the tunnel (the entire Bahamas vaccinated ) would be a blessing, but in order to get there, there must first be a real plan and a real timetable along with the truth. How can something so important be ordered and the exact arrival time not known and delayed without being able to give a reliable truthful reason why the product is late or delayed in the first place. Starting is a Great thing but Finishing is Everything. Skeptical, can they Finish?

According to what I read in daily. the first 20,000 doses are free from India. So that could be a part of problem. Do Bahamas have any scientist here ,who can test drugs before use. Or we have to except what India and WHO say???

The end of the tunnel is indeed in sight if it looks likely Minnis will be voted out of office in the general election he is about to call.