Minnis still in favour of term limits . . . next time around 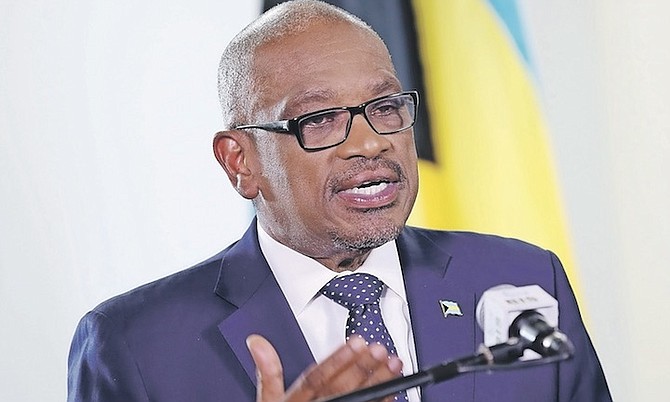 PRIME Minister Dr Hubert Minnis said he still plans to institute term limits, suggesting this would be on the agenda if he is re-elected for a second term.

On Friday, Dr Minnis was asked about the term-limit promise he made on the campaign trail and shortly after winning the 2017 election.

He said: “That hasn’t changed. I have one more term. Election is due by May of next year. Whenever (the) election is called, then I have no doubt we’ll win. I’d roll in to my last and final term. I would legislate it as quickly as possible. However, I most certainly would adhere to what has been said.”

Shortly after the May 2017 general election, the Minnis administration said it would seek the consent of the electorate in a referendum on instituting term limits for the prime minister, a recall system for non-performing members of Parliament and an independent Constituencies Commission and Electoral Commission. The promises were made in the Speech from The Throne, which revealed the government’s intended plans over the ensuing five years.

In May 2018, Attorney General Carl Bethel said public consultation on bills establishing term limits for prime ministers and fixed dates for election would begin before the end of that year.

At the time, he said the Law Reform Commission would “finalise two draft constitutional bills” to address such matters.

“Once completed we will commence public consultations before the end of this year, and the government will then decide if it is required to hold a referendum, when to pass the bills and when to hold any referendum which might become necessary,” Mr Bethel said in 2018.

However, it is unclear what movement, if any, on the issue has occurred since then.

I wasn't presented with the opportunity be staring in his face but was he Thee, Mr. Minnis, posed with a straight face when he was saying, "However, I most certainly would adhere to what has been said.**

Nelson Mandela was the only leader who ever gave up power voluntarily. He could have kept it but he walked away after one term. That is a leader.

No PM in the Bahamas will ever bring a bill for term limits because once they get there the power goes to their heads.

If Minnis was serious about term limits he would do it and not talk about doing it. Just like he could draft a disaster bill in months, he could do the same for term limits.

And, havin' the right political connections, can get you a private island, and, or, insider buy/sell tips trading shares, yes?

That is not true. There have been other leaders who have voluntarily given up power.

George Washington did it in the US. He served two terms as president and retired to his estate in Washington. Pierre Trudeau who was one of the longest serving prime minister in Canada also stepped down voluntarily.

Bahamians simply don't understand governance and management. They simply make up things as they go along.

I do not question your logic, moncurcool What I do question, however, is why are we so much in favour of "term limits"? And who decided that the right time is two terms? Is there empirical evidence to suggest that 3 terms is the point at which one becomes corrupt? And, no, I carry no water, not even stinking slop bucket water, for Mr. Minnis.

LIAR, LIAR.....PANTS ON FIRE! Snap election must be just around the corner. LOL

It is the new voter that any party or politician wanting to win the next election must court if they want to be successful. Most of the PLP’s who supported the Minnis’ led FNM to victory, will be returning home to the PLP this election and so there’s no great chance of a very lopsided victory. No blowout this time. A more ‘Joe Biden’ type victory that, at this time can go either way, despite many thinking the FNM may have the edge at this juncture. But it will be the new voter that will mostly decide the next election. And these are the ones who may be more difficult to interpret, not necessarily more difficult to please. These are the ones who drive pass the car dealerships in the country in their FIT or NOTE and realize it will be a while before they can afford a vehicle off any of those lots. So they’ve learned to navigate the internet and find a Japanese vehicle for less than $5,000 and don’t have to worry about the bank taking it. And when they need another one they can more easily find $5,000 than get a car loan. The same with housing. They have seen not only parents, but grandparents struggle with mortgages on homes and spend the rest of their lives struggling to pay the bank and trying to keep the house in repair. No thanks, we’ll rent until we can afford a mortgage. ‘Besides me and my girl, our relationship ain’t strong like that and I don’t want her bail out on me.’ She feels the same way. They may not understand everything about a sovereign wealth fund or the value of our natural resources, but they do know someone has been making a lot of money off them and it’s time to share the pie with the rest of the population. And yes, why is the electricity bill so high and BPL is still investing in fossil fuels and fossil fuel plants that are surely becoming obsolete or less significant assets around the world. No renewal energy in The Bahamas? Germany has 30-40 percent of its energy generation from solar and wind power. Yes Germany! And it’s electricity generation is 3-4 cents per kilowatt hour compared to ours which is doubled digits. Germany broke its electricity grid down from four major producers of electricity to where practically any property tied into the grid can produce electricity. Those that produce more sell it back to the power companies and those that produce less than they use purchase the additional ay very nominal rates. BPL must evolve from a monopolistic producer and distributor of electricity and must also become a power management company. Many of the Family Islands that do not have high industrial users can produce their own electricity mostly from solar and wind. BPL only needs to go in and digitize the grid, manage the supply and distribution and the cost of electricity on these islands can be reduced by 50%. But they are too busy putting in power plants that will quickly become obsolete. And yes, the new voter is online savvy. Shopping online and having to experience customs.

And yes, the new voter is ‘online savvy!’ Shopping online and having to experience Customs with their high rates of duty with VAT piled up on top of it has taught them that it’s not local businesses that are responsible for high prices and the high cost of living, but that government vis a vis and other mechanisms is getting more than the lion’s share of taxes.., from ordinary Bahamians especially. And that,too must be fixed. And what does the new voter think of the politician? They see politicians as just that. A politician who will come with a song and dance, begging to be elected with a briefcase of promises. But the new voter will sing and dance with the politicians, wear their hat and tat sirt even. But at the end of the day, the new voter will do what’s best for him and his family, the country even, and vote his conscience.

term limits were supposed to have been done this term, as well as freedom of information act, campaign finance contributions etc. So, we have to vote you back in to get it? Thanks, DADDY. I should be thankful and grateful, I guess. Oh, you should be made a hero.

Term limits should be simple... serve ONE TERM only!