Face To Face: Making Their Mark On The Lives Of Women 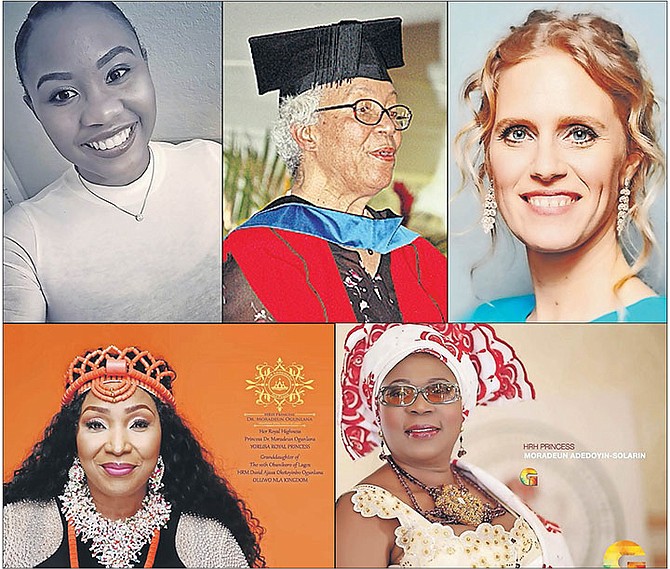 I SPENT International Women’s Day speaking with some phenomenal women. Their stories reminded me of how unique we are and how in our own right, we are each adding our bit of magic to the world.

Our living legend Dame Ivy Dumont took the time to speak with me. She celebrated her 90th birthday this past October and is still as sharp as a tack. We laughed and talked about Long Island and her childhood days. I told her that it was likely that because she was a teacher’s assistant since the age of 12, her mind had been sharpened in such a way that it is still serving her well. She was even able to recite a phone number off the top of her head of a family member I should connect with to get more family history. Her grandmother was the niece of my great grandfather, Willie William Wallace Whitfield Watson.

Dame Ivy Leona Dumont (nee Turnquest) was the first female Governor General of the Commonwealth of The Bahamas. Her long and extensive career in education led her all the way to the top - she served in the Cabinet of the Free National Government as Minister of Education from 1995 to 2000. She served in other posts in government but this one was by far dearest to her heart. Her career in teaching put her in a position to make real policy changes for the better. She then served as acting Governor General on November 13, 2001 until she officially became Governor General on January 1, 2002. She was a gracious head of state and she served in that capacity until November 30, 2005.

“I had my hand in many areas of life. I have been blessed and I am still able to do many things, if I so desire. I cannot go all over the place (with COVID restrictions in place) but I am still doing what I can - still helping where I can.”

My next two conversations to celebrate the day took place with two Nigerian princesses. Both have connections to The Bahamas and have travelled here several times. They were close with the late Dr Myles Munroe through his International Third World Leaders Association, and they are great friends with Dr Debbie Bartlett through her CEO Network.

The first is Princess Moradeun Adedoyin-Solarin, a Yoruba Princess, Pan African Royal, Cultural Ambassador, broadcaster, media specialist, speaker and community leader. We spoke about a previous column I did on Queen Ophelia, who was crowned as a Yoruba Queen right here in Nassau - Grants Town to be specific.

Princess Moradeun revealed even more than what we discovered on bahamianology. com. On one occasion, Princess Moradeun was visiting the country for a conference at Bahamas Faith Ministries. She told her father, Prince Israel Iretiola Adedoyin about her wonderful experience with the country and people. He asked her if Bahamians know they have Yoruba heritage.

She added with a chuckle: “He said, ‘small girl, you are not listening to me! Do they know they have Yoruba origins? Well let me tell you! In the late 1800s, there was a Yoruba queen who presided over The Bahamas and her name was Ophelia Rutherford.’ I said wow. Well that was a long time ago and there was no Internet available at that time... it was the 1980s. All I had was what I heard from my dad. I had forgotten about it and one day, with the advent of the Internet, I said let me google it, maybe I will find it. I did that and boom! It just came up. Who was the first person I told? Dr. Debbie Bartlett. I asked her if she was aware, she said ‘no’. I sent her the link. She was called Queen of the South. And all of her regalia came from Africa from our tribe - her queen’s scarf of office, all her regalia was sent to her from the Yoruba Kingdom in Nigeria. and people also came from Nigeria who assisted in the coronation ceremony.

“She was not just chosen. The elders consulted the oracle, and the oracle had chosen her. She was a real role model. She was very particular about young men. She worked with them, mentoring them and coaching them, and talking to them about what it is to be an African and a young man. She explained to them what the tradition says they should be. Royalty is a privilege from God. For you to be put in a Royal family is a privilege. But with that comes responsibility. Royalty is about leadership and leadership is about service to your community, your society and larger humanity. So this woman must have already known that - she knew who she was. She was also groomed and trained before she sat on the throne. We heard that she did so well that she groomed amazing young men into leaders in The Bahamas.”

The second Princess I interviewed was Princess Moradeun Ogunlana, better known as Princess Deun. Her grandfather was the late Oba David Ajasa Ogunlana, who ruled Lagos from 1948 to 1969. She has been inducted at the US, China and Taiwan Culture Development Centre (UCT) at the UN as an Ambassador of Culture. In 2014, she was inducted as an Ambassador for Peace by the Universal Peace Federation at the UN and serves as the international coordinator for the Nigerian Ambassador for Peace in the Diaspora Initiatives.

She was highlighted for International Women’s Day because of her African Women’s Health Project International, which is growing so strongly that its effects are already being felt here in The Bahamas.

Princess Deun first got the idea to start the initiative after a life changing experience. She had been living in the United States for many years after schooling there. When her grandmother passed away, she went home to Nigeria for the home going ceremonies. While there, she was at an event at the beach when she saw a little boy eating food out of the sand. She followed him to his mother. She met a woman with six children all under the age of nine. She was breastfeeding a toddler on one breast, while the other was oozing with gangrene. In that moment, Princess Deun decided she could not see things like this going on in the world and do nothing.

She realised that women often put themselves last when it comes to their health. She set on a mission to help women with their health needs. She established African Women’s Health Project International officially in 2003 and since then, women all around the world have benefitted from financial aid, much needed medical assistance, expertise, information and education. Her group has grown to begin to include educational and social purposes, and are helping children in Nigeria to not only have healthy food and medical assistance, but have access to education as well.

Globally, her project has brought information and assistance to women with cancer. Princess Deun is a fashion designer by profession. She connected with our local noted designer, Gillian Curry Williams, who was the focus on a previous Face to Face column. Together, they are devising ways to help Bahamian women, especially in light of astounding numbers in breast cancer in the country. She spoke to me from her home in Houston.

Yet another interview took me to Trinidad where I spoke with visionary international entrepreneur, Briony Vanden Bussche. She was born in New Caledonia to Belgian parents, but her father’s diplomatic status gave her the opportunity to grow up in different parts of the world. Today, she is a trainer and the creator of the Quantum Shift method. She is an expert in business and educational innovation and trains entrepreneurs in business expansion and quantum thinking.

“Know that your imagination is the most powerful force inside of you,” said Briony.

“Your imagination is more powerful than your natural thoughts. You can envision yourself as you want to be. Think of how it feels being confident, how people would react to you and how you would react to people if you were already living in that reality. Play this game in yourself that you are already in that future. In that moment that you do that, your environment and even people will react to it (hence, your dream can become your reality). It is based on the principles of quantum physics.”

“In an experiment, if you shoot certain particles through a certain split, electrons for example, they behave like waves of potential. It’s all potential. It’s not defined yet. If you put an observer there - you can call it consciousness - what happens is you create matter. So, matter is only there because of an observer. You can call it consciousness, you can call it God, or your imaginative power. It’s an observer focusing on a certain outcome that creates the reality. We might want a certain goal, but things inside of us - like fears - they are creating a different reality. So a Quantum shift is a whole process about being conscious about everything you feel and think, because it will very much affect the outcome of what you will achieve.”

Finally, I highlight a young Bahamian woman who is indeed living out her goals. Twenty-five-year-old Kenea Andrews is working for the Georgia State Department as an Epidemiologist - a most valued profession during a time like this.

Kenea is a recent graduate of Mercer University where she earned a Master’s degree in Public Health in May, 2020.

“When I graduated, the pandemic had already started,” Kenea said.

“For the last few months of our graduate study, we spent a lot of time having class discussions about the pandemic. We talked about what we would do, how we would change things, and what our thoughts were as the pandemic started to progress. This is something we had gone to school for, so we were all ecstatic for the opportunity (to work to make a difference). After that, I started to look for a job. A lot of students who study public health would like to get a touch of epidemiology to study the diseases because that is what we have been trained to do. It’s very interesting and enlightening, and I got the opportunity just months after I graduated, and that was the biggest blessing. I am sure the pandemic made my work or my hands in the pandemic necessary, but I was very grateful to land that opportunity so soon after I graduated. I am an epidemiologist and this is my dream job!”

Kenea says she won’t ever forget her Bahamian roots, and intends to do research and work that would benefit the Ministry of Health in The Bahamas one day.